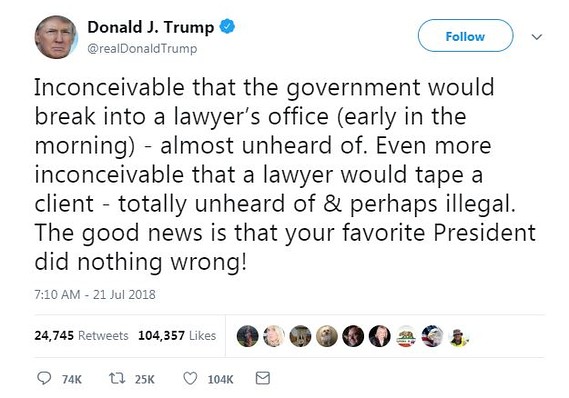 Insisting that “your favorite President did nothing wrong,” Donald Trump harangued his own former lawyer and excoriated Robert Mueller’s investigators in a Saturday morning tweet.

“Inconceivable that the government would break into a lawyer’s office (early in the morning) — almost unheard of,” he posted at 8:10 a.m. “Even more inconceivable that a lawyer would tape a client — totally unheard of & perhaps illegal.”

“The good news is that your favorite President did nothing wrong!”

It was Trump’s first public reaction to Friday’s reports that his longtime lawyer, Michael Cohen, secretly recorded a conversation with his client – shortly before the 2016 election – about a potential payment to a former Playboy model who said she’d had an affair with the then-candidate.

This report previously appeared at NYPost.com.