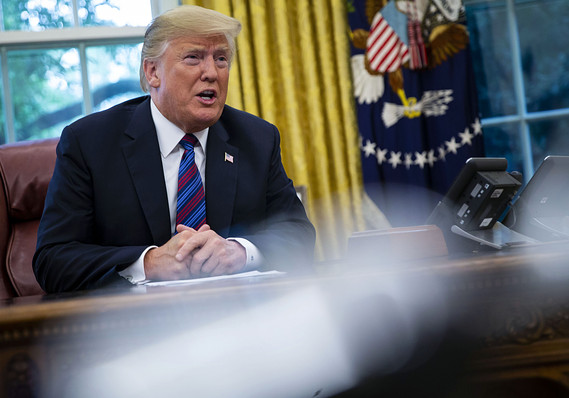 That sound of ice thawing? It’s the Trump administration’s tentative deal with Mexico to rewrite the controversial Nafta free-trade pact, the first clear evidence the White House is willing to compromise on its hardline demands and avert ruinous trade wars.

Trump Today: President pressures Canada on trade as he announces deal with Mexico

Details of the pending agreement are sketchy for now. Senior White House officials suggested the new pact would result in more new cars and trucks being made in the U.S. using steel and other materials produced in North America. That was one of President Donald Trump’s chief goals.

Other key provisions could lead to higher wages for Mexican auto workers and even give them greater rights to unionize, moves meant to reduce the incentive for U.S. automakers to shift operations south of the border due to lower labor costs.

The new agreement also puts greater emphasis on crafting rules to govern the “digital economy” and protect copyrights and intellectual-property rights, areas in which the U.S. is a global leader.

“I think this is an extremely historic time,” said Robert Lighthizer, the chief U.S. trade negotiator, in a call with reporters. “We had a Nafta agreement that got seriously out of whack … and needed modern updating.”

A deal is far from done, of course. Canada is the third country that was party to the original North American Free Trade Agreement signed in 1994, but negotiations have been at a standstill. The White House hopes Canada will now rejoin the talks and quickly join with the U.S. and Mexico to ratify a successor agreement to Nafta.

“We hope that Canada can join in now,” Lighthizer told reporters Monday. Talks are expected to resume soon, and at this point, it’s unlikely that any Nafta successor would be voted upon until the next Congress convenes in early 2019.

The Canadians and no doubt the Europeans and Chinese are likely to comb over the details of the agreement. The U.S. is sure to use the deal with Mexico as a template for negotiations in talks with other countries to update trade rules that Trump has long complained are unfair.

What the Mexico deal also shows, though, is the Trump administration is ready to compromise on some of its toughest demands. The U.S., for instance, dropped its insistence on a hard “sunset” clause that would cause the trade deal to expire after a certain number of years.

“Despite the Trump administration’s intransigence over trade disputes in recent months, it is willing to negotiate in good faith and accept a compromise, which will be welcomed in both China and Europe,” contended Paul Ashworth, chief U.S. economist at Capital Economics.

The new pact calls for the U.S. and Mexico to review an updated North American free-trade deal six years into a 16-year window. The countries could extend the pact another 16 years at any point after that six-year period.

The U.S. also appears to have softened its demand for an end to an arbitration process for determining if a country was violating the trade agreement. Industries in the U.S. mostly support the current process for resolving problems and lobbied the White House to back off.

Yet even if the agreement is not entirely what the White House wanted, the deal with Mexico allows Trump to claim partial victory for his “America First” policy.

What’s more, the deal will go a long way in easing tensions on Wall Street and in Washington that Trump’s tough talk on trade would ignite a conflagration damaging to economies all around the world.

It’s “a victory for rationality over rhetoric,” said Steve Nelson, a partner at the law firm Dorsey & Whitney and a former state department lawyer.

Trump Today: President pressures Canada on trade as he announces deal with Mexico

Ahead of Trump meeting, the EU readies new US tariffs worth $20 billion