The deployment of chemical weapons. Perhaps even a tactical nuclear strike, or full-scale assault on one of the country’s nuclear plants.

There are still lots of ways the war in Ukraine could get much worse than it already is. They are all terrifying enough. And yet, there is another threat as well, and one that has not even started to be added into the potential reckoning: a financial crash. 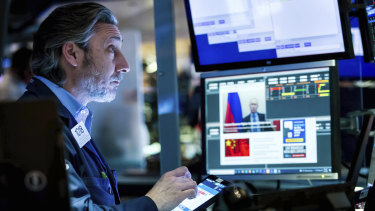 We haven’t seen a crash yet. But it may only be a matter of time.Credit:AP

In truth, the markets have never witnessed stress at these levels, nor price moves this violent, without cracks starting to appear somewhere. The eurozone may soon start to splinter, with Cyprus’s oligarch-dependent economy heading into big trouble, and potentially Malta as well.

Energy intensive manufacturers may soon start closing down as their costs become unsustainable; and we could soon be back in a full-scale sovereign debt crisis as developing economies have to choose between buying oil and wheat and paying back their creditors.

One point is certain. We have only seen the beginning of the financial turbulence. It will get a lot rockier over the next few months.

More than three weeks after Russian soldiers started to move into Ukraine, it is already clear that the invasion is turning into the biggest shock to the global economy since the Yom Kippur war in the early 1970s – and the quadrupling of energy prices that followed. The great inflation, the dotcom bubble, the financial crash and COVID-19 already look like minor blips by comparison.

One of the world’s major economies, and one of the largest exporters of energy, food, and raw materials, is being taken out of the global economy, sending prices soaring, and causing shortages of every type of commodity. We will find out over the next few weeks how long the war will last. Right now, it looks as if the Russian advance has stalled, and its army is about to get bogged down in a long and brutal war of attrition.

The invasion is turning into the biggest shock to the global economy since the Yom Kippur war in the early 1970s […]. The great inflation, the dotcom bubble, the financial crash and COVID-19 already look like minor blips by comparison.

If so, it is unlikely that Russia will be admitted back into the club of civilised nations any time soon. The rest of the global economy will simply have to work out how to operate without access to Russian energy, grain, and raw materials, just as Russia will have to work out how to survive without Western capital, technology and expertise. There is no point pretending that won’t fracture the global economy. Where are the stress points? Here are three to keep a close eye on.

First, the eurozone. All the attention has been on how Germany will wean itself off Russian gas. But there are smaller economies that are entirely dependent on Russian cash. If anyone thinks London was a laundromat for oligarch money they have not been paying attention to Cyprus. It is the offshore banking centre for Moscow and St Petersburg.

There was more than €100 billion ($152 billion) of Russian investment in the island – with a population of just 1.2 million – in 2020 alone. Cyprus is also by far the largest investor in Russia, as money gets recycled through its financial system into the homeland (it “invests” almost 20 times as much money into Russia as Germany, according to data from the central bank in Moscow). 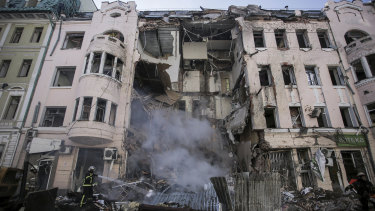 The Russian invasion of Ukraine is turning into the biggest shock to the global economy since the Yom Kippur war in the early 1970s.Credit:AP

What happens to that now is anyone’s guess, but it doesn’t sound good. Malta is in the same boat: it stopped selling passports to wealthy Russians last week, but there is plenty of its money on the island. Even Greece was becoming heavily dependent on Russian money. Normally, Cyprus, Malta and Greece would simply devalue their currencies to cope with the adjustment. Within the euro, as we learnt so painfully in 2010 and 2011 that isn’t possible.

If one of those economies crashes, just as in the Greek crisis of a decade ago, the entire eurozone will quickly be plunged into crisis.

Next, watch out for manufacturing defaults. Oil has almost doubled in price and gas is up five-fold.

That is bad enough for anyone filling up their car or keeping the boiler switched on, but it is even worse for anyone running a factory. Chemicals, cement, metals and paper plants are among the most energy intensive industries. There are already reports of steel mills in Spain suspending production and fertiliser manufacturers in Norway closing.

That should hardly be a great surprise. At a certain point, it simply isn’t viable to keep going.

Here’s the problem. All those companies have bank debts to service, and their staff have mortgages to pay. As more and more close their doors debts will cascade through the system.

Finally, a sovereign debt crisis. Russia has already indicated it will default on its debts for the first time since Lenin decided that the “debts of the Tsar died with the Tsar” in 1918.

That is worrying enough, and no doubt we will find out soon enough who was lending more money to the country than was wise or prudent (here’s a clue – they may well be based in Germany).

But it is not likely to stop there. Very soon many of the developing economies will have to make an unpleasant choice over whether they carry on paying their foreign creditors, or continue to buy oil and grain instead. It is not hard to work out which will come first. A series of sovereign defaults are inevitable, especially as debt levels have soared in the last decade.

The harsh truth is that the extreme movement in prices of the past fortnight still has to ripple through the global economy. So do the consequences of taking Russia out of the global financial system, eliminating its debts and removing the clique of oligarchs around the Kremlin.

We haven’t seen a crash yet. But it may only be a matter of time – the real question is how bad the shock will be.