Home » Economy » The PM’s wages call could cost him dearly

The PM’s wages call could cost him dearly

At last, as the election campaign reaches the final stretch, we’ve found something worth debating. Anthony Albanese has found his spine and supported a big rise in award wages, while Scott Morrison says a decent rise for the masses is a terrible idea that would damage the economy.

First the politics, then the economics. My guess is history will judge this to be the misstep that did most to cost Morrison the election. Successful Liberal leaders – John Howard, for instance – know never to be caught within cooee of a sign saying “wages should be lowered”. It’s not the way to woo outer-suburbs battlers to the Liberal cause. 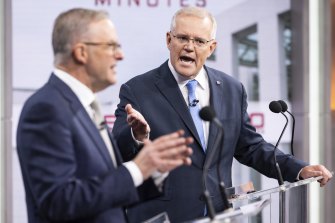 Scott Morrison claims a minimum-wage increase sufficient to stop wages falling behind the rise in consumer prices would be “reckless and dangerous”.Credit:Alex Ellinghausen

That Morrison should defy this precedent in a campaign where the cost of living has become by far the biggest issue is all the more surprising.

It’s because the Libs are seen as the bosses’ party that they’re instinctively regarded as better at managing the budget and the economy – a mindset Morrison is desperately seeking to exploit in “these uncertain times”.

But the other side of the penny is that Labor, the party of the workers, is the party that cares, and will spend more on providing government services. Which party’s best at industrial relations and wages? One guess.

But how do the minimum wage arrangements work? And what are the broader economic implications of a rise high enough to cover the 5.1 per cent rise in consumer prices over the year to March – or not high enough, so that wages fall in “real terms”?

The Fair Work Commission conducts an annual wage review to determine the increase in the national minimum wage on July 1. Last year’s increase of 2.5 per cent applied to the 2 per cent of employees on the national minimum rate, but also the 23 per cent of employees whose wage is set by one of the various minimum rates for workers in different job classifications set out in each of the more than 100 industrial awards established by the commission.

The national minimum wage rate is about $20 an hour, or about $40,000 a year for a full-time worker. About 2.7 million workers have their wage set in this way.

A 5 per cent increase in the national minimum wage would be worth about $1 an hour or about $2000 a year. Note, however, that many of those in more skilled award classifications would be earning much more than that. 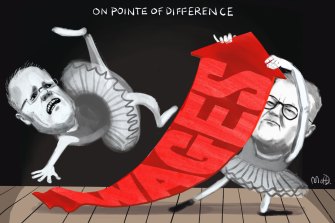 The rises the industrial parties ask for in hearings before the commission are always “ambit claims”. The Australian Council of Trade Unions wants a rise of 5.5 per cent.

Morrison has implied it would be quite improper for a federal Labor government to seek to influence the decision of the independent commission. But the fact is federal and state governments routinely make submissions to provide information about the state of the economy and indicate how generous or tight-fisted they think the commission should be – though they rarely suggest a specific figure.

The commission will give due consideration to a government’s submission but, rest assured, it will do as it sees fit, usually awarding an increase somewhere between the employers’ lowball and the unions’ highball.

My guess is this year’s decision will be a lot higher than last year’s 2.5 per cent, but not nearly as high as 5.5 per cent.

That’s particularly because the commission can be expected to allow for the 0.5 percentage-point increase in employers’ compulsory contributions to their workers’ superannuation accounts this July. The unions would love to have their cake and eat it, but I doubt they’ll be allowed to.

Albanese says, “the idea that people who are doing it really tough at the moment should have a further cut in their cost of living is, in my view, simply untenable”.

Morrison claims a minimum-wage increase sufficient to stop wages falling behind the rise in consumer prices would be “reckless and dangerous”.

The Ai Group warns that “an excessive minimum wage increase would fuel inflation and lead to higher interest rates . . . than would otherwise be the case”. It would be detrimental to economic growth and job creation.

The chamber of commerce says “any increase of 5 per cent or more would inflict further pain on small business, and the millions of jobs they sustain and create. Small business cannot afford it”.

So, what do I think? I think it’s easy to exaggerate the economic cost of giving our lowest-paid workers a decent pay rise. Small business always cries poor and warns jobs will be lost. But there’s little empirical evidence that higher wages lead to job losses.

It’s true that giving a quarter of our workers little or no compensation for the jump in prices caused by pandemic supply disruptions and the Ukraine war would be the quickest and easiest way to get inflation back down to the Reserve Bank’s 2 to 3 per cent target range.

But it would also be hugely unfair to load that burden onto our lowest paid workers, while business profits escaped untouched. The Reserve will just have to be more patient if it doesn’t want to crunch the economy with big rate rises.

And here’s the bit the business lobby groups seem too short-sighted to see. The more we cut the real incomes of our businesses’ customers, the less businesses will be able to sell to them, and the more the economy will be in anything but the “strong” condition Morrison keeps claiming it’s in.

Ross Gittins is the economics editor.