A rare regime-change in economic policy is underway that's edging central bankers out of the pivotal role they have played for decades.

Fiscal policy, which fell out of fashion as an engine of economic growth during the inflationary 1970s, has been front-and-centre in the fight against COVID-19. Governments have subsidised wages, mailed cheques to households and guaranteed loans for business. They've run up record budget deficits on the way – an approach that economists have gradually come to support, ever since the last big crash in 2008 ushered in a decade of tepid growth. 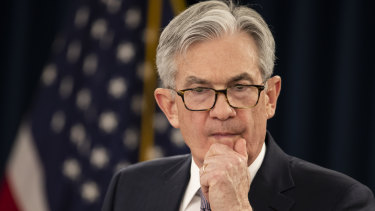 Fed chairman Jerome Powell. The pandemic has been a challenge for central banks around the world. Credit:AP

And the public spending that put a floor under the pandemic slump is increasingly seen as vital for a sustained recovery too. When it looks like drying up, as it did in the US last week, investors start to worry.

How long to keep the taps open will be a key theme at this week's International Monetary Fund meetings – and the biggest challenge for politicians in charge of national budgets, once they emerge from crisis-fighting mode. Right now their own inhibitions about debt look like the main obstacle, as traditional barriers melt away.

Financial markets, where bond vigilantes were once reckoned to exert a powerful check on deficit-spending governments, are ready to lend them money at very low interest rates. The short-run concern for investors is that politicians will stall the recovery by spending too little. JPMorgan predicts that this year's big fiscal boost to the global economy may turn into a 2.4 percentage-point drag on growth in 2021, as virus relief programs expire.

The same worry weighs on monetary authorities, whose autonomy from the rest of government was designed so they could push back against too-loose fiscal policy. Running short of their own tools to juice economies, with interest rates already at zero or below, central banks are now doing the opposite. They're calling for more deficit-spending, buying up swathes of the resulting debt, and promising low borrowing costs far into the future.

"Fiscal policy is the big game in town now," said Stephen King, senior economic adviser to HSBC. "As a central banker, you have to accept in that sense you've lost a bit of power to the political process."

Fiscal stimulus packs a bigger punch than the monetary kind because it can channel cash directly to households or businesses, and it's better suited for delivering targeted aid to those who need it most in a crisis, like the unemployed. Central bankers can only inject more spending power into the economy via an indirect channel: the price of borrowing from banks or financial markets.

But they can at least act fast and decisively. Budget processes, by contrast, can get messy -as illustrated in the US For months now, both parties have accepted that more spending is needed. Because they couldn't agree on how much, or what kind, the result has been no further stimulus at all.

Even if a deal isn't reached before November's election, economists at Goldman Sachs and other banks expect the fiscal support to resume after it.

Fiscal policy is the big game in town now. As a central banker, you have to accept in that sense you've lost a bit of power to the political process.

President Donald Trump is promising more tax cuts if he wins. Democratic challenger Joe Biden, who leads opinion polls, has outlined a $US3.5 trillion spending program – and signalled he won't be bound by the idea that economies necessarily do better when governments are less involved. "Milton Friedman isn't running the show anymore," Biden told Politico in April.

In Europe, where fiscal caution has deep roots in German fears of debt and inflation, leaders took a big step this year toward pooling their budget resources – an idea long seen as a non-starter, and one that still faces hurdles – as the pandemic threatened to overwhelm the European Central Bank's ability to prop up economies.

German officials say there'll be no return to balanced budgets in their own country anytime soon. In the UK, governing Conservatives who championed austerity after the 2008 crash are ruling out a repeat, though they've started talking about tax increases to finance pandemic relief efforts.

Yoshihide Suga, Japan's new prime minister, has said debt consolidation will have to wait until growth is back – and suggested there's no hard limit to how much his government can borrow.

Japan was the first major country in the modern era where interest rates fell to zero, after a credit bubble burst some three decades ago. Monetary policy was left with no easy way to stimulate growth by making borrowing cheaper – and households and businesses weren't keen to take on more debt anyway, while the government could and did. It was an early-warning sign that the world's central banks might run out of steam, and bring fiscal policy back to the fore.

After 2008, much of the developed world found itself in a similar predicament. Unable to lower short-term rates, central banks tried to cap longer-term borrowing costs by buying securities – mostly public debt, since governments were the main borrowers in depressed economies. That exposed them to new criticisms.

"Buying assets has all sorts of political and distributional side effects," said Charlie Bean, a former Bank of England deputy governor. "We have to move out of the world where central banks are seen as the solution, to one where the government and fiscal policy will often have to pick up the ball and run with it."

Governments boosted spending in response to the 2008 crash too. There's now a consensus among economists that they pivoted to austerity too early, holding back growth in the decade before the coronavirus struck. Plenty of fiscal advocates fear that history could repeat itself.

The start-stop approach "contributed to discrediting fiscal policy" in the past, said Robert Skidelsky, an economic historian known for his biography of the British economist and champion of fiscal activism John Maynard Keynes. 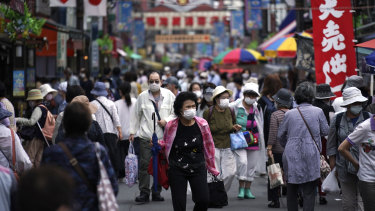 Japan was the first major country in the modern era where interest rates fell to zero, after a credit bubble burst some three decades ago. It was an early-warning sign that the world’s central banks might run out of steam, and bring fiscal policy back to the fore.Credit:AP

After the Great Depression of the 1930s, Keynesian policy became the orthodoxy for most Western governments, who used their budgets to stimulate demand and create jobs. But the edifice came crashing down in the 1970s when unemployment and prices surged at the same time, and inflation-targeting central banks emerged as the primary macro-economic managers.

The watershed moment came with Fed Chair Paul Volcker's interest-rate hikes at the start of the 1980s, according to Catherine Mann, Citigroup's global chief economist, who was working on her PhD around that time. She's not yet convinced that the policy response to COVID-19 falls into the same game-changing category.

For that to happen, governments would have to start using fiscal policy not just for the short-term purpose of "getting the economy out of the doldrums" but in pursuit of longer-term goals, like lowering inequality or carbon emissions, Mann said.

There are signs they are headed that way. Some recovery programs in Europe have put job-creation and environmental sustainability at their heart, and Biden is promising a $US2 trillion ($2.8 trillion) green-energy overhaul in the US.

And in the world of economics, the new school of Modern Monetary Theory – which says governments usually have more room to spend in times of low inflation – has gained traction by advocating bold fiscally financed programs like a Green New Deal.

It all points toward the revamp of economic management that should have happened after the financial crisis a decade ago, according to Paul McCulley, former chief economist at bond giant Pacific Investment Management. Back then, politicians balked at the size of deficits and debt, he told Bloomberg's Odd Lots podcast. Now he thinks the coronavirus has completed the regime-change.

"Any pretense is over," he said. "We're clearly living in a fiscal-policy dominated world."