WASHINGTON—Republican and Democratic lawmakers braced for a volatile lame-duck session, with another clash brewing over coronavirus aid and the outcome of the race for the White House, as well as some key Senate and House contests, still up in the air.

Each party logged victories in this week’s results, leaving neither side ready to make dramatic concessions in the long-running deliberations over another coronavirus relief bill. Democrats pointed to the likely path for their presidential nominee, Joe Biden, winning the White House, while Republicans said their unexpected gains in the House and victories in many contested Senate seats should compel new compromises from Democrats.

Senate Majority Leader Mitch McConnell (R., Ky.) is expected by lawmakers and aides to assume a larger role in negotiations that he had largely ceded to Treasury Secretary Steven Mnuchin. Mr. Mnuchin failed to strike an agreement with House Speaker Nancy Pelosi (D., Calif.) during weeks of talks leading up to the election, and White House negotiators were often out of sync with Senate Republicans.

Mr. McConnell moved swiftly to plant markers this week, urging lawmakers to reach an agreement around a new Covid-19 relief deal before the end of the year. He pointed to data released Friday showing that the jobless rate had declined to 6.9% to highlight the logic behind the Senate Republicans’ roughly $650 billion proposal, far smaller than the $2 trillion Mrs. Pelosi and Mr. Mnuchin had been discussing. “Our economy is really moving to get back on its feet. That I think clearly ought to affect what size of any rescue package we additionally do,” Mr. McConnell said Friday in Kentucky. “I do think we need another one, but I think it reinforces the argument that I’ve been making the last few months that something smaller rather than throwing another $3 trillion at this issue is more appropriate.”

House Democrats had initially passed a $3.5 trillion aid bill in May, before passing a scaled-back $2.2 trillion version last month to show their willingness to compromise on a smaller package as part of the negotiations with the White House. Republicans have argued the economy was on track to a self-sustaining recovery, Democrats have said more funding was needed to fully address the and contain the impact of the pandemic.

White House economic adviser Larry Kudlow indicated that the administration was talking with Mr. McConnell about a package similar to what the Senate GOP has proposed.

“We are not interested in, you know, $2 or $3 trillion,” Mr. Kudlow said. “We think we’re in a very strong position. The president and his policies have long coattails in this election.”

Mrs. Pelosi made clear on Friday that she wasn’t ready to abandon many of the priorities she had been holding out for in her negotiations with Mr. Mnuchin.

“That isn’t anything we should be looking at. It wasn’t the right thing to do before,” she said of the Senate GOP bill, which Democrats had blocked. 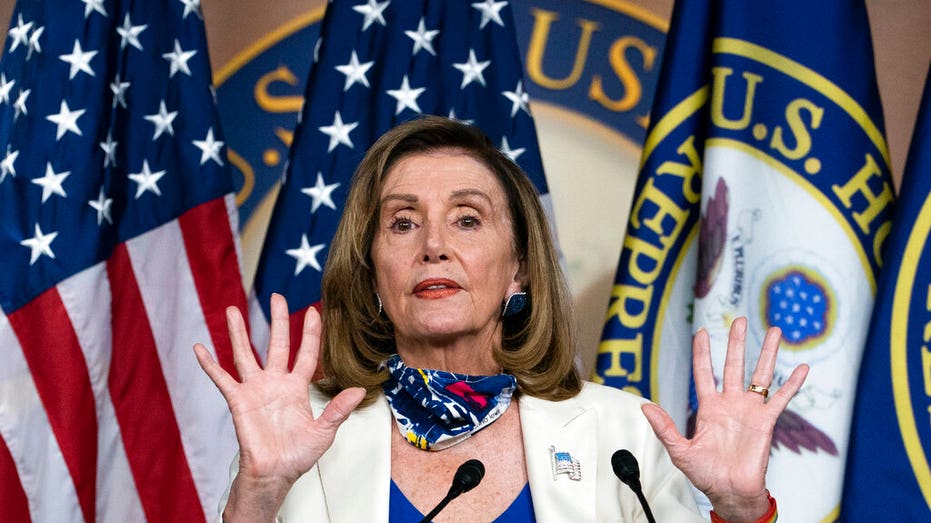 Pelosi made clear on Friday that she wasn’t ready to abandon many of the priorities she had been holding out for in her negotiations with Mnuchin. (AP Photo/Jacquelyn Martin)

The GOP legislation includes another round of forgivable loans to small businesses under the Paycheck Protection Program, offers $300 in weekly federal jobless benefits, establishes legal protections for businesses and health providers, adds an infusion of funding for testing and vaccines and provides new money for schools and child care.

But it doesn’t include a second round of direct checks for Americans or funding for state and local governments, among other provisions Democrats have sought. Democrats also were seeking $600 in weekly jobless aid.

Lawmakers return to Washington after the election for a “lame duck” session that runs until the new Congress is sworn in in early January. Democrats are currently expected to maintain a narrow majority in the House, while control of the Senate is expected to be decided by two runoff races in Georgia in January.

There are incentives for both parties to try to cut an agreement while Mr. Trump is still in office, whether or not he wins a second term. Republicans will have less leverage if Mr. Biden takes power next year, while Democrats see advantages in passing a bill now as well to avoid a logjam if Mr. Biden is elected. If left unaddressed, the debate over a stimulus bill could quickly balloon next year if it gets ensnared with fights over spending bills or the debt limit, which is currently suspended through July 2021, draining Mr. Biden’s political capital early on.

But lame-duck sessions are notorious for accomplishing little and lawmakers worried this year’s dynamics could be particularly thorny.

“It’s going to be a challenge because we’re negotiating with McConnell and we don’t have a president who’s incentivized electorally to do anything,” Rep. Ro Khanna (D., Calif.) said Friday of a Covid-19 relief bill. “We have to figure out now what’s the best we can get.”

Mrs. Pelosi faces frustration from some Democrats who had urged her to reach an agreement with White House officials before the election, when Mr. Trump was more motivated to cut a deal he believed could help boost his re-election prospects. It wasn’t clear, however, how such an agreement could have passed the GOP-controlled Senate, which Mr. McConnell had signaled would oppose a package with a nearly $2 trillion price tag.

Some Democrats said they were concerned about whether Mr. Trump would be willing to back a deal, considering he may be still challenging election results.

“My worry is that Donald Trump is going to be in a personal and political meltdown after he realizes he’s lost the election,” Sen. Chris Murphy (D., Conn.) said. “I worry that Trump will be the obstacle in the lame duck even if McConnell wants to do something.”

Some lawmakers from both parties believe a large package is out of reach.

Sen. Roy Blunt of Missouri, a member of Senate GOP leadership, said Democrats’ losses in the House signaled that Mrs. Pelosi would have to make new concessions.

“The vast majority of her members also think she has to give some ground here, that the liberal agenda was rejected by voters,” he told reporters Friday.

“Providing a stimulus package is so urgently needed, but I don’t believe that we should shortcut the American people,” said Rep. Ilhan Omar (D., Minn.), who lost her father and cousin to complications from the coronavirus. “I have been supportive of the fact that the hill she wants to die on is providing aid to local municipalities and our states.”

—Natalie Andrews contributed to this article.