Russian billionaires are running out of havens to stash their fortunes

Glance at a map, and Cyprus is barely a blip relative to Russia’s vast expanse. The Mediterranean island is a mere 0.05 per cent the size of the world’s largest country.

But for Russia’s top 0.05 per cent — its oligarchs and billionaires — Cyprus is hugely significant. It for years housed an outsized share of their wealth, in some cases even dwarfing what they held in the motherland itself. 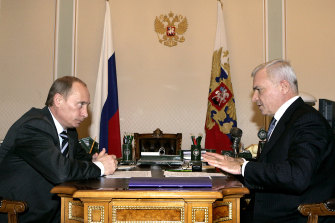 Victor Rashnikov (right) with Vladimir Putin, last month transferred a $US4 billion stake in one of Russia’s biggest steelmakers from a shell company in Cyprus back to his home country, two weeks before he was sanctioned by the EU.Credit:Pool

At least, it did before Russian troops encamped on the border of Ukraine.

In recent weeks, some of the biggest assets held by Russia’s richest people have been whisked out of Cyprus, under pressure from European Union regulators wielding sanctions on the one hand and Vladimir Putin’s demands to repatriate wealth on the other.

Victor Rashnikov last month transferred a $US4 billion ($5.3 billion) stake in one of Russia’s biggest steelmakers from a shell company in Cyprus back to his home country, two weeks before he was sanctioned by the EU.

Steel tycoon Alexey Mordashov made a similar move on February 28, the same day he was sanctioned. He shifted arrangements for part of a $US1.5 billion stake in German holiday-tour business TUI AG from a Cyprus entity to one in the British Virgin Islands.

More recently, a Cyprus holding company for Novatek chairman Leonid Mikhelson transferred a roughly 14 per cent stake in the Russia gas producer to him individually on March 17, according to a regulatory filing on Monday. The position was worth about $US4.8 billion when the Moscow stock exchange halted trading last month, according to data compiled by Bloomberg. He hasn’t been sanctioned.

And even before the war, Vladimir Potanin — Russia’s richest person, with a $US24.7 billion fortune — was moving assets away from the island. His holding company left Cyprus late last year in favour of a special tax zone in Vladivostok, established by Putin to encourage the wealthy to bring their money home. He hasn’t been sanctioned.

As Russia increasingly becomes a pariah in the global financial system, billionaires who have long sheltered their fortunes abroad suddenly have far fewer options for where to put their money. Repatriating assets to a country careening toward economic ruin, putting them within Putin’s grasp, is a dire proposition. But so is keeping them in the US, UK or in EU jurisdictions, like Cyprus or the Caribbean, where they face freezes, blockades or possibly seizures.

Their best bet is somewhere relatively neutral, said Ronen Palan, a professor and expert on tax havens at City University London. The war in Ukraine has already boosted the amount of Russian money flowing into Dubai, whose government has urged a “peaceful” solution to the conflict. Hong Kong is another possibility, though the long shadow of China’s Xi Jinping is a potential threat to the primary objective of offshoring Russians. Other spots include Mauritius and the Maldives. 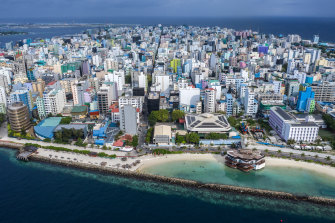 The Maldives is still a refuge for the assets of Russia’s oligarchs.Credit:Getty

“The main reason why the wealthy in Russia take money out is to safeguard their assets,” said Palan. “It’s not so much about tax avoidance, as we think about it in the West.”

Some 20 Russians rank among the world’s 500 richest people. Worth a combined $US261 billion, more than half of them have used Cyprus holding companies for their main assets, according to filings. Russia has entwined itself in the island’s culture and economy for decades, since its backing of the country’s Greek Cypriot majority during its division. It has flourished as a haven thanks to low taxes, EU membership and a legal system based on English common law.

A handful of the billionaires have holdings in the British Virgin Islands or elsewhere in the Caribbean, a region popular for its strict secrecy. At least three more use vehicles in Europe. Mikhail Fridman, Petr Aven and German Khan — who are all under EU and UK sanctions — use Luxembourg entities to control investment firm LetterOne, which has holdings spanning energy, retail and telecommunications.

Roman Abramovich used shell companies in the Caribbean, including BVI and the Cayman Islands, and an Austrian bank to invest billions of dollars in US hedge funds and private equity firms, according to the New York Times, which said Concord Management in Tarrytown, New York, facilitated many of the transactions.

“The main reason why the wealthy in Russia take money out is to safeguard their assets…It’s not so much about tax avoidance, as we think about it in the West.”

Abramovich took direct control last month of his $US445 million stake in London-based steelmaker Evraz PLC, moving shares out of a BVI holding company and into his own hands. The UK sanctioned him on March 10.

The moves may face challenges as sanctions mount: German authorities said on Friday they had blocked Mordashov’s transfer to the British Virgin Islands while they investigate the deal. For his part, Mordashov has called the Ukraine war “a tragedy” and said he doesn’t understand why he’s been sanctioned.

Spokespersons for Mordashov and Abramovich declined to comment. A representative for Rashnikov didn’t respond to requests for comment. At the time he moved his stake in Magnitogorsk Iron & Steel Works, the company said Cyprus was becoming “less attractive” for Russian investments and that Rashnikov wanted to make use of legal and regulatory advantages in his homeland.

Magnitogorsk Iron & Steel Works said in a March 18 statement the sanctions against Rashnikov are “groundless and unfair.” 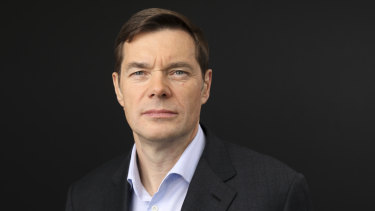 Russia’s fourth-richest person Alexey Mordashov shifted arrangements for part of a $US1.5 billion stake in German holiday-tour business TUI AG from a Cyprus entity to one in the British Virgin Islands soon after being sanctioned.Credit:Bloomberg

Indeed, in some ways the sanctions are aiding Putin’s demand for the richest to bring home their far-flung wealth. His ultimatum dates back to the Crimea invasion in 2014 when an initial round of sanctions on oligarchs and billionaires helped to prompt laws around so-called de-offshorisation.

Gennady Timchenko, who was sanctioned by the US in 2014 over Russia’s annexation of Crimea, used a Luxembourg firm to build a stake more than a decade ago in Novatek. That company was placed into liquidation in 2017 — shortly before the US sanctioned other Russian billionaires including Oleg Deripaska — and Timchenko now largely manages his wealth through Russian companies, according to registry filings. He was sanctioned by the UK and EU last month.

Even as the options for stashing money dry up, the amount channelled to offshore centres by Russians on the whole could be poised to spike, said Paivi Karhunen, a professor at Aalto University in Espoo, Finland, who studies Russia’s use of offshore entities. Not only is the nation’s economy in freefall, but an offshore company enables an investor to effectively scrub its Russian tracks.

“If they can somehow hide their Russian origin they can make investments into other companies,” she said.

Russian money could also wind up in America. Holding company structures can obscure the identity or nationality of the beneficiary and also allow owners to skirt sanctions rules on beneficial ownership, said Lakshmi Kumar, policy director at nonprofit Global Financial Integrity. Minimal disclosure requirements around ownership of private companies and property in the US, for instance, raises the likelihood that tainted money will “rebrand itself, essentially, and exploit loopholes,” she said.

For the US and other countries to implement sanctions effectively, they can’t “inadvertently serve as a safe haven,” she said.