Australia’s clean energy transition is tipped to accelerate to the point that most homes will have solar panels paired with batteries by 2030 and the nation could have the highest penetration of renewable energy per-capita of anywhere in the world.

As pressure mounts ahead of the Glasgow climate summit for Australia and other developed nations to quit coal-fired electricity by 2030, a new report compiling the views of 30 energy industry and government leaders, including Federal Energy Minister Angus Taylor, details the commonly held expectation that the shift to clean power rolling through the sector is only going to get faster. 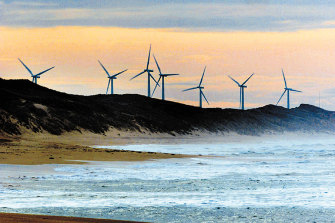 “Australia’s energy and natural resources sectors have evolved and reduced emissions much faster than we expected a decade ago,” Mr Taylor said when asked what the energy landscape would look like in 2030.

He said he believed hydrogen – made from either renewable energy or from natural gas combined with a process to trap and bury the carbon dioxide released – would be more competitive by then and help cut emissions in parts of the economy that could not be easily electrified.

“The extraordinary uptake of renewables, particularly household solar, towards the end of the 2010s, has been matched by huge growth in the 2020s of a range of new low-emissions energy technologies,” Mr Taylor said.

While many experts agree government policy is needed to help phase out planet-heating fossil fuels, the Morrison government has adopted an approach of “technology not taxes” to drive commercial uptake of lower-carbon energy. It has resisted setting industry emission targets, a carbon price or moves to reduce fossil fuels’ role in the grid in coming years.

Still, the KPMG Future of Energy report concludes that the make-up of Australia’s fossil fuel-dominated electricity market will look vastly different by 2030.

Consumers would be at the heart of the transition, with 70 per cent of the respondents agreeing that a majority of businesses and households would have solar and battery systems installed.

While coal and gas account for about three-quarters of today’s power mix, KPMG said it was likely renewable energy would be “predominantly powering Australia” by the end of the decade.

The closure of coal-fired power stations would be well-advanced by then, it added, with batteries, pumped hydro, demand-response and gas-fired generators supporting weather-dependent renewable energy during periods when it is not sunny or windy.

Mr Taylor said his plan to introduce a “capacity mechanism” to spur investment in “dispatchable” assets capable of supplying on-demand power, such as gas, batteries and pumped hydro, would prove vital to having delivered a smooth transition.

“In 2030, the energy network is a combination of grid scale generation and storage, along with this more distributed power generation,” Mr Taylor said. “For them to work in harmony, recognition of the role of dispatchability in the electricity grid and the shift to a capacity mechanism was needed.”

Despite the technical and policy challenges presented by the energy transition, Ms Hogan said an “overwhelming theme” in the report was that the shift was not only inevitable, but gaining pace every day.

“Australia is going through one of the fastest and most complicated energy transitions in the world,” she said.

“What surprised me … is how much the conversation has shifted and that’s just in the last few years: there was a strong sense across the businesses, industries, consumers and government that we need to progress rapidly to achieving net-zero emissions.”

Australia is one of the only wealthy nations yet to set a mid-century deadline to reach net-zero emissions and is facing a rising tide of international pressure for stronger climate action.

Prime Minister Scott Morrison, who has said he would like to achieve net-zero “as soon as possible” and “preferably” by 2050, has not yet announced whether he will join Mr Taylor at the United Nations climate summit in Glasgow in November. His attendance will likely hinge on whether his government decides to commit to a 2050 net-zero target by then.

The Clean Energy Council, an industry group representing renewable energy developers, said any “road map” the government may be developing to reach net-zero emissions by 2050 must be accompanied by a strong interim 2030 target for Australia to be 100 per cent powered by renewables.

“Decarbonising the electricity sector is the most efficient pathway to net-zero by 2050,” chief executive Kane Thornton said.

“Australians expect that any targets are met with real progress, not just slogans, and there is a clear expectation from the international community for Australia to turn its reputation as a climate laggard around ahead of COP26.”