Home » Economy » Reality is catching up with our freeloading, populist climate deniers

Reality is catching up with our freeloading, populist climate deniers

Don’t be taken in by the Morrison government’s outraged cries of “protectionism” against the EU plan to impose a carbon tax on our exports to Europe. It’s we who are in the wrong, failing to do what we should have to reduce emissions, in favour of politicking and populism.

What we’re seeing is just the reality of the world’s need to act to limit climate change catching up with a government and federal party which, since Tony Abbott used denialism to seize the party’s leadership from Malcolm Turnbull in 2009, decided to make global warming a party-political football: a way to beat your opponents, not a need to tackle the nation’s biggest problem. 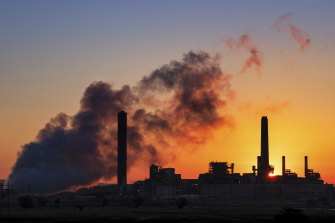 The EU plans to use a “carbon border adjustment mechanism” to impose carbon taxes on imports.Credit:AP

It’s a condemnation of our business people that, when their own side of politics offered them a way to postpone the inevitable costs of adjusting to a low-carbon world, they happily embraced it.

It’s a condemnation of Australian voters that they were willing to allow their preferred party to tell them whether they cared or didn’t care about their children’s future. It should have been the other way round. “It’s all too hard; you do my thinking for me.”

But the game has moved on since those bad days, and now it’s not just the rest of the world that’s realised there’s no future in denying the reality of climate change and the need to act. As each day passes, we see more evidence that our own financial regulators, banks, investors and businesses are accepting the inevitable and modifying their behaviour.

All our state governments – most notably the Berejiklian Coalition government of NSW – have embraced the target that all other rich nations have embraced, net-zero emissions by 2050. Everyone can see that our refusal to take climate change seriously is wrong-headed and unsustainable.

So, apart from being a national embarrassment – we’re the person stopped for not wearing a mask, so to speak – it’s no bad thing that even other countries have stepped in to oblige our national government to shoulder its responsibilities.

As part of their plan to reduce their emissions by 55 per cent by 2030, the Europeans are toughening up the emissions trading scheme they introduced in 2005, which imposes a price on the carbon emissions of European industries.

To prevent this putting their industries at a disadvantage against imports from countries that don’t impose a similar carbon price on their own industries, the Europeans plan to use a “carbon border adjustment mechanism”, a tax on imported cement, fertilisers, aluminium and iron and steel to bring their carbon costs up to those faced by local producers.

So there’s no reason for any of us who believe climate change is real and must be countered to have any sympathy for the Abbott-Turnbull-Morrison government. All its sins of expedience and populist politicking are finding it out.

This not only levels the playing field for local industry, it eliminates the incentive for producers to move their production to countries without carbon pricing.

These problems are ones we ourselves worried about when designing Kevin Rudd’s original carbon pollution reduction scheme (which the Coalition and the Greens voted down in 2010) and Julia Gillard’s carbon pricing scheme of 2012 (which was repealed by Abbott in 2014).

So what the Europeans want to do can’t honestly be called protectionism. It bears no similarity with the new import duties China’s imposing on some of our exports.

What’s true is that it’s a messy but necessary way of solving the “wicked” problem of climate change which, being global, can only be fixed by all of the world’s big emitting countries doing their bit. This is why we can expect many other big countries – starting with America, and maybe extending to Japan − to impose similar carbon border taxes on those countries that try to freeload on those doing the right thing, while helping to sabotage the good guys’ efforts in the process.

So there’s no reason for any of us who believe climate change is real and must be countered to have any sympathy for the Abbott-Turnbull-Morrison government. All its sins of expedience and populist politicking are finding it out. It took a bet that the rest of the world wouldn’t get serious, and we lost.

The point is, had we stuck with either the first or the second version of our own emissions trading scheme – which was actually designed to fit with the Europeans’ scheme – we wouldn’t have this problem.

By now our exporters would be paying our carbon tax to our government (or, if they weren’t yet, we could easily fix it) rather than paying the same tax to foreign governments. Why’s that a good idea?

From the beginning, this government has used climate change as nothing more than an opportunity to attack the other side of politics by pushing populist delusions that taxes are always and everywhere a bad thing. Bad for the economy. Yeah, sure.

Ross Gittins is the economics editor.

The Morning Edition newsletter is our guide to the day’s most important and interesting stories, analyses and insights. Sign up here.