Home » Economy » Power grid can be rid of coal ‘without price rises, outages’

Power grid can be rid of coal ‘without price rises, outages’

Eliminating coal from Australia’s energy system within 20 years would not significantly increase the risk of blackouts or price spikes, according to new modelling that counters the claim that coal-fired generation is key to ensuring affordable and reliable electricity.

As the nation’s transition to clean energy gathers speed, a study from the Grattan Institute think tank challenges the argument of pro-coal politicians and the fossil fuel lobby about the importance of keeping coal generators running, showing that Australia can achieve a net-zero emissions electricity system without posing any threats to consumers. 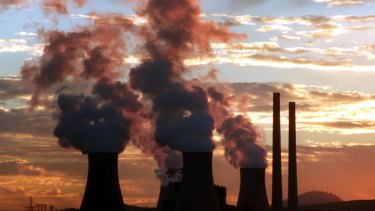 Gas-fired power will play a role in supporting renewable energy by providing on-demand power, but it would “not have an expanded role”, the modelling found, raising questions about the merits of the Morrison government’s plans to pursue a gas-fired economic recovery from COVID-19.

“The scaremongers are wrong – the analysis in our report shows that Australia can achieve the trifecta of reliable, affordable, low-emissions electricity, and we can do it without coal,” Grattan Institute energy director Tony Wood said.

However, Grattan’s findings also warn against rushing to 100 per cent renewable energy, saying it would be expensive to provide the back-up required to ensure reliability and prevent outages when peak demand times coincided with overcast and windless periods unfavourable for renewable energy.

Across Australia, coal-fired power stations are nearing the end of their lives and are facing enormous financial pressure as the influx of cheap renewable energy drives down daytime wholesale power prices to levels where coal is increasingly unable to compete. EnergyAustralia last month announced it would close Victoria’s Yallourn brown coal-fired power plant in 2028, four years earlier than planned, in response to spiralling losses.

Nationals MPs have called for the government to build new coal-fired power plants and last year awarded a $3.6 million grant for a proponent to investigate the feasibility of a coal plant in north Queensland. Federal Energy Minister Angus Taylor has warned of the risks to consumers when Yallourn shuts.

“While coal exits impact reliability and system security, the major impact for consumers will be the significant increase in prices if not adequately replaced with dispatchable capacity,” Mr Taylor said in March.

Mr Wood said he did not believe Mr Taylor or the Prime Minister were “any longer” pushing for a new coal plant.

“We can close coal and we can do this with renewables – I’ve not been getting strong pushback on that from the government,” he said.

Coal remains the biggest source of energy in Australia’s main electrical grid. Currently, around 23 gigawatts of coal-fired capacity is available for the grid to draw on. Less than half that capacity will remain by 2040 as ageing plants retire, and a steep reduction will see capacity reduced to zero by 2050. To date, 8 gigawatts of wind and 5 gigawatts of utility-scale solar have entered the market.

“No matter what we do in the next 20 years as we’re replacing old coal, whether we replace it with new coal or gas, prices are going to steadily increase,” Mr Wood said. “We’re also saying that we can reduce emissions for virtually no extra cost to a very high percentage of emissions reduction.”

Grattan’s modelling found that moving to a system of 70 per cent renewable energy and closing down two-thirds of the country’s coal power stations would not materially increase the cost of power but would dramatically cut emissions. Moving to 90 per cent renewable energy and no coal, meanwhile, would also maintain reliability but would involve some additional costs for generation, transmission and storage to ensure security of supply. However, moving to 100 per cent renewables over the next 20 years would be expensive in the absence of major technological breakthroughs, according to Grattan.

The report will also anger the clean-energy advocates who are calling for a 100 per cent renewable energy revolution. Former chief scientist Alan Finkel copped a backlash last year when he said while gas consumption was not expected to rise, it would remain critical to support renewables.

Mr Wood said gas was expected to plan a “critical back-up role” for renewable energy but not an expanded one.

A second new report by the Clean Energy Council found that big batteries could provide the same services to the grid as gas peaking plants – proving quick surges of power at peak demand periods – 30 percent cheaper, faster, and with much less greenhouse gas emissions.

The report provided further evidence that batteries would displace gas for providing continuity of supply when renewables could not meet surges of demand said Lisa Zembrodt energy markets director at Schneider Electric, a global energy adviser.

“Gas still has a role to play,” she said. “What we believe, however, is that we don’t need more gas-fired generation capacity from the government on top of what is already planned or committed by the private sector.”