Home » Economy » Inflation is not a big problem, so don’t hit it with a sledgehammer

Inflation is not a big problem, so don’t hit it with a sledgehammer

It’s an old expression, but a good one: out of the frying pan, into the fire. Less than two years ago we were told that, after having escaped recession for almost 30 years, the pandemic and our efforts to stop the virus spreading had plunged us into the deepest recession in almost a century.

Only a few months later we were told that, thanks to the massive sums that governments had spent protecting the incomes of workers and businesses during the lockdowns, the economy had “bounced back” from the recession and was growing more strongly than it had been before the pandemic arrived. 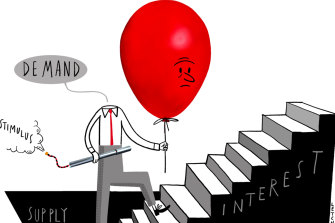 No sooner had the rate of unemployment leapt to 7.5 per cent than it began falling rapidly and is now, we learnt a fortnight ago, down to 3.5 per cent – its lowest since 1974.

You little beauty. At last, the economy’s going fine and we can get on with our lives without a care.

But, no. Suddenly, out of nowhere, a new and terrible problem has emerged. The rate of inflation is soaring. It’s sure to have done more soaring when we see the latest figures on Wednesday morning.

So worrying is soaring inflation that the Reserve Bank is having to jack up interest rates as fast as possible to stop the soaring. It’s such a worry, many in the financial markets believe, that it may prove necessary to put interest rates up so high they cause … a recession.

Really? No, not really. There’s much talk of recession – and this week we’re likely to hear claims that the US has entered it – but if we go into recession just a few years after the last one, it will be because the Reserve Bank has been panicked into hitting the interest-rate brakes far harder than warranted.

As you know, since the mid-1990s the power to influence interest rates has shifted from the elected politicians to the unelected econocrats at our central bank. A convention has been established that government ministers must never comment on what the Reserve should or shouldn’t be doing about interest rates.

So last week Anthony Albanese, still on his PM’s P-plates, got into trouble for saying the Reserve’s bosses “need to be careful that they don’t overreach”.

Well, he shouldn’t be saying it, but there’s nothing to stop me saying it – because it needs to be said. The Reserve is under huge pressure from the financial markets to keep jacking up rates, but it must hold its nerve and do no more than necessary.

It’s important to understand that prices have risen a lot in all the advanced economies. They’ve risen not primarily for the usual reason – because economies have been “overheating”, with the demand for goods and services overtaking businesses’ ability to supply them – but for the less common reason that the pandemic has led to bottlenecks and other disruptions to supply.

To this main, pandemic problem has been added the effect of Russia’s invasion of Ukraine on oil and gas, and wheat and other foodstuffs.

The point is that these are essentially once-off price rises. Prices won’t keep rising for these reasons and, eventually, the supply disruptions will be solved and the Ukraine attack will end. Locally, the supply of meat and vegetables will get back to normal – until the next drought and flooding.

Increasing interest rates – which all the rich countries’ central banks are doing – can do nothing to end supply disruptions caused by the pandemic, end the Ukraine war or stop climate change.

All higher rates can do is reduce households’ ability to spend – particularly those households with big, recently acquired mortgages, and those facing higher rent.

The Reserve keeps reminding us that – because most of us were able to keep working, but not spending as much, during the lockdowns – households now have an extra $260 billion in bank accounts. But much of this is in mortgage redraw and offset accounts, and will be rapidly eaten up by higher interest rates.

Of course, the higher prices we’re paying for petrol, electricity, gas and food will themselves reduce our ability to spend on other things, independent of what’s happening to interest rates. It would be a different matter if we were all getting wage rises big enough to cover those price rises, but it’s clear we won’t be.

The main part of the inflation problem that is of our own making is the rise in the prices of newly built homes and building materials. This was caused by the combination of lower interest rates and special grants to home buyers hugely overstretching the housing industry. But higher interest rates and falling house prices will end that.

So, while it’s true we do need to get the official interest rate up from its lockdown emergency level of virtually zero to “more normal levels” of “at least 2.5 per cent”, it’s equally clear we don’t need to go any higher to ensure the inflation rate eventually falls back to the Reserve’s 2 to 3 per cent target range.