What is inflation? Why is it bad? Why aren’t real wages rising – and what does that even mean?

Just when we’d finished wrapping our heads around “quantitative easing”, the post-pandemic-lockdown era has yielded a host of new problems when it comes to sounding sensible and educated at social functions.

What is inflation? Why is it bad? Why aren’t real wages rising? What does that even mean?

The bad news is that average price of goods and services most commonly purchased by consumers rose 6.1 per cent last financial year – the highest rate of growth in two decades – and the government expects this to rise to 7.75 per cent by the end of the calendar year. For mortgage holders, that means further bad news of more interest rate rises to come.

The good news, however, is that the Australian economy is actually taking a sharp U-turn back to its conventional ways of operating – rather than teetering on the precipice of doom, as it was during the initial days of the pandemic. Old textbook truths about how the economy should operate are starting to apply again. What were those truths again? If you need a refresher, here it is. 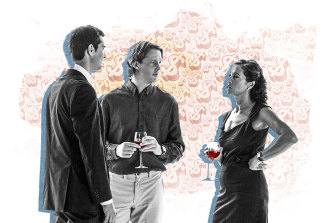 People commonly adopt a very serious voice when they begin to talk about the economy but remember, the economy is just a bunch of humans doing what humans do – buying and selling things to live a nice life.

Back in the day, people lived relatively quiet lives, consuming only the limited goods and services they could provide themselves. Then, they figured out what a great idea it was to head into the nearest town and swap one of their pigs for a cow – or perhaps a haircut. Enterprising people sprang up to build businesses to specialise in producing one, or a handful of, products and services. They gained access to “capital” – finance or equipment – and set about hiring workers, or “labour”, to help them produce at scale, in return for wages. That is, they made an economy.

Inflation is just the observed tendency of prices within economies to move upwards, in a generalised way, over time. And it is generalised: just as one swallow does not make a summer, one price rise on a particular item – such as lettuce – does not make inflation.

What does CPI have to do with it?

Economists use the “consumer price index” to try to take the temperature of general inflationary pressures in the economy. Based on actual spending data, they create a hypothetical “basket” of goods and services that consumers commonly buy, and track price movements in them over time.

Here’s a handy distinction. The consumer price index grew 6.1 per cent last financial year. So, you might have heard that “inflation was 6.1 per cent”. That’s not quite true, it means the prices of items tracked in the CPI grew by that much on average. However, when you strip out some items that experienced volatile price swings, “underlying” inflation was closer to about 4 per cent.

Nor is it true to say the “cost of living” rose by 6.1 per cent. In reality, every household’s cost of living is different because they buy a different basket of goods and services to everyone else. And households can vary this basket over time and substitute more expensive items for cheaper ones, such as swapping lettuces for avocados (which are now cheap due to a supply glut).

Still, whichever way you slice it, broad inflationary pressures seem to be running above the Reserve Bank’s target range for inflation over the long run of 2 to 3 per cent, which is why it is acting now.

Hang on, why must inflation be curbed?

Inflation erodes the value of money in your pocket. When prices rise, your dollar will buy fewer goods and services next year than it will today. Economists say the “purchasing power” of your dollar has declined – and that’s not good for anyone.

Households need some confidence that the value of their hard-earned money will be protected, helping them to make spending decisions from year to year and also to save longer term for retirement. Businesses also benefit from stability in price rises, including helping them to negotiate long-term supply contracts, set pricing strategies and reward staff with adequate wage rises.

When people anticipate prices will fall, they generally decide to hold off on buying things … bringing the economy to a shuddering halt.

A bit of inflation, however, is necessary. Why? Because it’s better than the alternative of “deflation” – when prices generally fall across the economy (not to be confused with “stagflation”, which is the rare and highly unusual occurrence of high inflation and economic stagnation).

Why is deflation so bad? Because when people anticipate prices will fall, they generally decide to hold off on buying things in the expectation they’ll be cheaper tomorrow, crimping spending and bringing the economy to a shuddering halt.

Generally, we’re all better off if there’s a bit of inflation, but not too much.

It’s Economics 101 that prices reflect the relative balance between supply and demand. When demand is strong – all else being equal – prices rise. Alternatively, when supply is low, prices rise. So to curb the pace of price growth in the economy, policymakers have two options: to either reduce demand or increase supply.

There is not a lot that policymakers can do in the short term to increase supply, so they tend to focus on managing demand in the economy. For households, that’s how much money they’ve got to spend. For businesses, it’s how much they can invest.

The Reserve Bank mainly targets one subset of households – those with big mortgages – to take demand out of the economy. The central bank uses its power to manipulate a key interest rate, which ripples out to the cost of funding across financial markets. An “interest rate” is money a lender charges a borrower, expressed as a percentage of the amount borrowed.

When the Reserve Bank makes it more expensive for banks to borrow by increasing this interest rate, they, in turn, pass on this higher cost to mortgage holders with higher interest rates. Higher mortgage payments mean less money for households to spend, so they tend to wind back on discretionary spending – eating out, holidays and so on – helping to cool demand in the economy.

Economists disagree about the relative responsibility of supply shortages or healthy demand in causing the current outbreak of inflation.

When demand from consumers falls, businesses are unable to charge higher prices for their products and inflation in prices tends to cool.

It’s another story when inflation is caused solely by supply shortages, such as floods and pandemic-related transport issues. It’s less clear whether demand management will help, but it is the tool most readily available to policy-makers to keep prices in check. Economists disagree about the relative responsibility of supply shortages or healthy demand in causing the current outbreak of inflation.

Can’t we all just get pay rises to offset inflation?

Wouldn’t that be nice? Over time, the data does show that workers generally get compensated for both rises in the cost of living caused by inflation plus something extra to reward them for any increase in their “productivity”.

Productivity is a measure of the efficiency with which the vital inputs of labour and capital are combined to produce goods and services. It doesn’t mean working longer hours to produce more. It means being able to produce more output within the same hour worked.

If wages rise 4 per cent and inflation only 2 per cent, workers have secured a real pay rise of 2 per cent.

Enhancements in human knowledge and technology tend to drive higher productivity. Whether those productivity gains are shared with workers or kept as profits depends on the relative bargaining power between employees and employers.

It’s not unheard of for inflation to outstrip wages in some years. Historically, however, when this happens this reduction in real wages is offset by bigger real wage gains in other years.

So why have real wages been falling lately?

Well, partly it’s because inflation has shot up so quickly. It takes some time for employers and employees to renegotiate multi-year wage agreements. The Reserve Bank is adamant it has survey evidence that many employers are, indeed, awarding higher wages, but it takes time for that to show up in the data.

It’s also true that inflation is expected to moderate in the years ahead from currently high rates. Perhaps workers will have success in securing pay rises that do eventually exceed inflation.

Much will depend on the relative bargaining power of employees versus employers. Large macro trends over the past few decades have undermined worker power, including increased globalisation, which has resulted in increased competition with cheaper offshore options, alongside increased automation, which has resulted in many workers being replaced with new machinery or automated systems. Unionisation rates have also plummeted.

What can the government do to get real wages up?

The new Albanese government made a point of promising to boost real wages if elected.

But the magnitude of that challenge is clear in new Treasury forecasts, released this week, that the consumer price index will spike as high as 7.75 per cent by year’s end.

Treasurer Jim Chalmers adequately summarised the problem of inflation in his economic statement: “Left untreated, inflation which is too high for too long undermines living standards and jobs, and wrecks economies.”

It’s high time for a new national discussion about ways to boost productivity and expand the supply-side of the economy.

What prescription the new government has for dealing with the problem is less than clear. There will be a jobs and skills summit held in Canberra in September that will bring together unions and employer groups. But economists point out that the longer-term road to sustainable real wages growth lies in boosting productivity growth. When workers are more productive, there is more room to grant above-inflation pay rises.

There are many potential ways the government could do this. It could invest more money, in a more effective way, into building the skills and education of the workforce. It could provide incentives for companies to invest in researching and developing new technologies. It could review the tax system to ensure capital flows into productive activities, such as starting up new businesses, and not into inflating asset prices, such as property.

Given the seriousness of the inflation challenge and the limitations of simple demand-side management to curb price pressures, it’s high time for a new national discussion about ways to boost productivity and expand the supply-side of the economy.

Fascinating answers to perplexing questions delivered to your inbox every week. Sign up to get our new Explainer newsletter here.