Former IMF chief economist Kenneth Rogoff discusses how much of an economic downturn the Federal Reserve is willing to risk to reduce inflation on ‘Mornings with Maria.’

The International Monetary Fund on Tuesday slashed its global growth outlook for next year, warning the world economy is headed for "stormy waters" and that there is a growing risk of a painful worldwide recession if major central banks fumble the fight against inflation.

The Washington-based institution said in its latest World Economic Outlook that global gross domestic product will still grow by 3.2% this year, but now anticipates it will slow sharply to just 2.7% in 2023. That is down 0.2 percentage points from its previous estimate and is a marked decline from its estimate of 3.8% at the beginning of the year, highlighting just how much the global economy has weakened in recent months.

Inflation could remain elevated for longer than previously expected, according to the IMF, which forecast prices peaking later this year and declining from 8.8% in 2022 to 6.5% in 2023.

"The worst is yet to come, and for many people 2023 will feel like a recession," the report said

THE FED'S WAR ON INFLATION COULD COST 1M JOBS 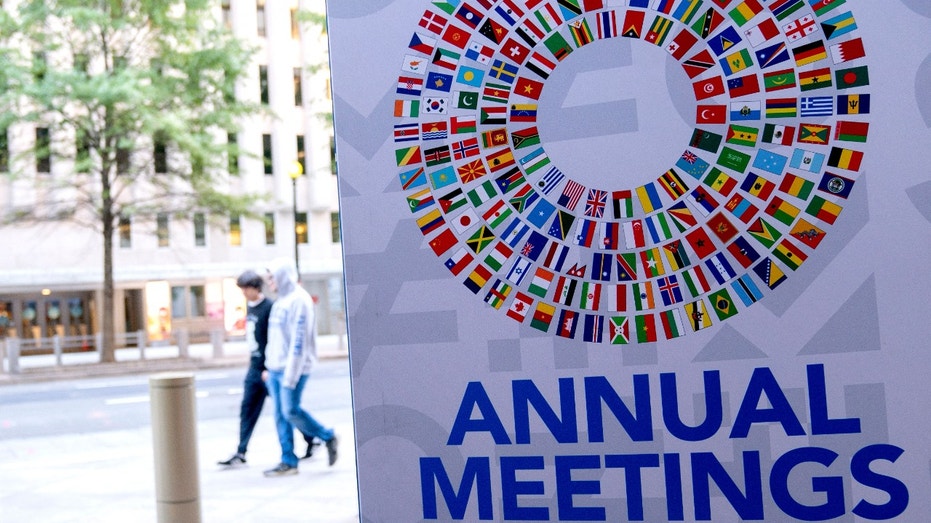 A sign for the International Monetary Fund (IMF) annual Fall Meetings is displayed between the World Bank and IMF headquarters in Washington, DC, on October 8, 2022. (Stefani Reynolds/AFP via Getty Images / Getty Images)

In the U.S., economic growth already contracted in the first two quarters of the year, with gross domestic product – the broadest measure of goods and services produced in a nation – declining by 1.6% in the winter and 0.6% in the spring.

The slowdown comes as the U.S. confronts the hottest inflation in four decades, which has drained household savings, and an increasingly aggressive Federal Reserve that's determined to wrestle prices under control with higher interest rates.

The Fed has even faced calls, including from the United Nations, to slow its interest rate hike path amid fears that tighter monetary policy could trigger a recession that seeps throughout lower-income countries.

But the IMF said on Tuesday that doing too little to fight inflation now will only make the fight more difficult later. It also called on governments to avoid enacting fiscal policies that threaten to exacerbate the inflation crisis.