Scott Morrison seems keen to keep his job as Prime Minister, but not so keen to do the job PMs are paid to do: make tough decisions in the nation’s interests. So it’s up to the rest of us to step into the breach. And when it comes to the decision Morrison fears most – getting to net zero emissions by 2050 – no one’s keener to help out than Tony Wood and his team at the Grattan Institute.

Wood begins where everyone with any sense begins: by noting that the best way to reduce emissions at minimum cost to the economy – and all the people in it – would be to introduce a single, economy-wide price on carbon emissions. 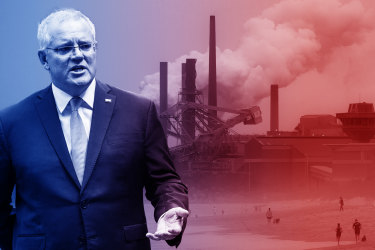 Australia’s approach to climate change is coming under increasing pressure.Credit:Getty

But the temptation to win elections with populist bulldust about “a big new tax on everything” proved too great and so, with that off the table, we must find other, more interventionist, sector-by-sector ways to skin the cat (many of them requiring additional government spending, which will have to be paid for somehow).

The basic strategy for reducing our emissions is clear: move from fossil fuels to renewable ways of producing electricity, (plus the use of batteries to store it), then meet all other energy needs with electricity. In practice, it’s more complicated, of course.

Official projections foresee emissions from electricity falling substantially over his decade, while the next four largest sources of emissions either grow or, at best, plateau. Grattan is producing a series of five reports proposing relatively easy and obvious ways of achieving early reductions in emissions in each sector.

The entire industrial sector accounts for almost a third of our total emissions, which are projected to be little changed over the decade.

Its thinking is to get early progress because, even if we were to reach net zero emissions just before 2050, that wouldn’t be sufficient to stop the increase in the global average temperature being a lot greater than 1.5 degrees – which is about as much as we can take without major social and economic disruption, not to mention personal discomfort.

If we take as many easy shots as we can now, that buys more time for technological advances to help us with the harder stuff. Getting some momentum going should help build public acceptance of the need for more, as well as giving business a clearer picture of where we’re heading and the risks it runs if it ploughs on regardless.

In any case, the latest report of the UN’s Intergovernmental Panel on Climate Change isn’t likely to be the last telling us temperatures are rising faster than earlier thought. It wouldn’t be surprising to see the 2050 deadline brought forward.

Wood’s first report in Grattan’s five-part series covered the transport sector. It proposed measures to achieve an early move to electric cars, while we wait for hydrogen technology to help with heavier transport.

Wood’s second report, on the industrial sector, was released on Sunday. This covers emissions arising from the production of coal, oil and gas – as opposed to their customers’ use of their products – emissions from the mining and processing of other minerals and metals, and emissions from processing in manufacturing.

The sector’s emissions have increased significantly since our base year, 2005, mainly because of our foolish decision to permit three different companies to build huge liquefaction plants on an island off the coast of Queensland and turn us into one of the world’s largest exporters of liquid natural gas. Liquefaction, it turns out, involves massive emissions.

The entire industrial sector accounts for almost a third of our total emissions, which are projected to be little changed over the decade. The good news is that 80 per cent of its emissions come from just 187 large facilities. Most of these are subject to the federal government’s existing “safeguards mechanism”, which sets a baseline – or maximum – for each facility’s emissions.

“From now on,” Wood says, “every decision to renew, refurbish or rebuild an industrial asset potentially locks in emissions for the coming decades. Getting these decisions right will be critical for reaching net zero.”

Of course, when it comes to the many facilities producing fossil fuels for export, their future prospects will be affected more by other countries’ climate-change policies than by ours. Good luck finding customers for fossil fuels as the reality of global warming catches up with them as well as us.