Electric vehicle-driving, coal power baron Trevor St Baker is throwing millions of dollars into EV charging infrastructure, saying the private sector had to step in to push the industry forward. 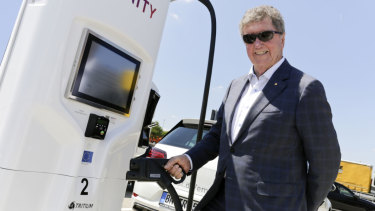 Federal Labor has pledged to make half of all new cars sold electric by 2030, while Prime Minister Scott Morrison said the target forced a shift to electric vehicles the public did not want.

Mr St Baker said EVs were inevitable and the private sector could take the lead if the government did not.

"It's not a question of uptake for electric vehicles, EVs are happening," Mr St Baker said.

Mr St Baker is the chairman of EV battery chargers Evie Networks and Tritium – which built half of Norway's public fast-chargers. He said he has driven an electric vehicle for eight years.

He is also one of the owners of the Vales Point coal-fired power station on Lake Macquarie, in NSW.

"All people need is the infrastructure, if they see it at service stations or elsewhere, they'll take it up," he said.

"We've invested about $50 million in charging infrastructure from Adelaide to Cairns. We're taking a risk but we're investing on the basis there will be one million more EVs, and they all need infrastructure."

Building electric vehicle charging infrastructure has been listed as a priority for the Australian government but a lack of support at a federal level had hampered the sector's growth.

“We’re helping Australia transform from being a global laggard in transport innovation to having only the third ultra-rapid electric vehicle charging network in the world.”

It plans to build another 20 stations.

Service stations Caltex and BP have also begun investigating the potential of electric vehicle chargers at their petrol stations.

As most EVs would rely on connecting to the grid for power, grid operators are also laying the groundwork for integrating electric vehicles.

In Canberra, energy distribution network Evoenergy is working with the ACT government on its transition to zero emissions vehicles plan, which is part of the state’s wider aim to be carbon neutral by 2020.

Trump says 'not even a little bit happy' with Fed's Powell: Report