Australia’s coal mining industry is considering setting up a self-insurance scheme as major financial institutions abandon the sector because of concerns about global warming.

Producers of coal, the nation’s second-largest export, have been under growing pressure in the face of spiralling costs and insurance premiums as banks, insurers and investors dump coal assets or pledge not to make new investments in the industry. The withdrawal is expected to accelerate after the United Nations warned the Intergovernmental Panel on Climate Change’s latest update “must sound a death knell for coal and fossil fuels before they destroy our planet”. 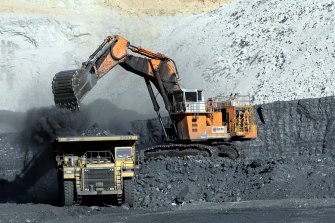 The coal industry weighing a self insurance scheme as miners struggle to access insurance and finance. Credit:Robert Rough

Coal industry insiders, who requested anonymity to talk about confidential discussions, said the financial community’s flight from the coal sector and its supply chain had spurred Australian companies to come together to investigate an insurance mutual fund instead.

“This is a real issue, it’s a problem, and it has accelerated,” one source told The Age and the Herald. “It has forced a hard look at alternative approaches.”

While considerations are ongoing and no formal agreement has been reached, Picnic Labs — a company that sets up and administers insurance mutual funds — said it had entered talks with mining supply chain representatives in Queensland in May.

Chief executive Charles Pollack told a federal Trade and Investment Committee inquiry that self-insurance would enable coal miners to “control their own destiny”.

The insurance pool would need between $20 million and $50 million to set up a “significant industry mutual”, he said. Miners need to insure their equipment, assets, workforces and the ability to meet supply contracts which can be disrupted by weather events.

Picnic Labs told the inquiry there was an “opportunity” for the taxpayer-funded Northern Australia Infrastructure Facility to help set up an insurance mutual, provided the agency expanded its investment mandate beyond infrastructure. The Australian Prudential Regulation Authority would also likely need to change its standards to license a coal industry mutual fund, depending on the model.

Asked about Picnic Labs’ suggested changes to the Northern Australia Infrastructure Facility, Northern Australia Minister David Littleproud said he would not “pre-empt the committee’s inquiry nor its recommendations”. The regulator said it would not comment until it addressed the inquiry on Friday.

The Minerals Council of Australia, representing the country’s top miners, said the denial of insurance to companies involved in coal mining despite no demonstrable change in the sector’s risk profile was a “serious concern”.

“The submission and evidence presented by Picnic Labs to the committee outlines the challenges confronting coal companies and proposes a way of addressing them,” Minerals Council chief executive Tania Constable said.

“The MCA looks forward to the Joint Standing Committee on Trade and Investment Growth’s report and recommendations.”

Some of Australia’s biggest coal miners including Whitehaven, New Hope and Adani, which is developing the controversial Carmichael mine in Queensland, told the inquiry that lack of access to finance and insurance unfairly threatened the industry’s future.

Ernst and Young Oceania partner for climate change and sustainability Emma Herd said the climate risks associated with greenhouse gases were rewriting how the market calculated financial risks for emissions-intensive industries. Thermal coal, she said, was “first cab off the rank”.

“This is flowing through to insurance pricing, investment attractiveness and credit risk pricing. At all parts of the investment decision cycle if you factor in carbon, it affects how you price it, your appetite for it, and your credit risk appetite,” Ms Herd said.

“This is a uniform trend. It’s not one bank trying to look better than another. It’s the whole sector saying this is how we do business now.”

The federal inquiry has heard the financial community’s retreat from coal not only applied to producers of the fossil fuel, but also infrastructure builders and even tradespeople if they derived any earnings from the coal sector. The operators of coal-fired power stations are also feeling the pressure.

Alinta Energy, which runs Victoria’s Loy Yang B brown coal generator in the Latrobe Valley, has recently gone through what managing director Jeff Dimery described as an “exceedingly difficult” process in seeking refinancing for the facility. Earlier this year, he called on Canberra to consider becoming a “lender of last resort” to the coal sector.

“Clearly … there isn’t a whole lot of people that want to put money into those sorts of vehicles on a go-forward basis,” he said.