Home » Economy » China is trying to revive its economy. We just got a sign it is not going to plan

China is trying to revive its economy. We just got a sign it is not going to plan

Iron ore prices have tumbled over the past fortnight amid a glut of Chinese steel that hints at a failure of China’s attempts to stimulate an economy weakened by its zero tolerance approach to outbreaks of COVID-19.

Two weeks ago iron ore was trading around $US145 a tonne. This week it has traded as low as $US111.35 a tonne, a dramatic fall from the $US161 a tonne peak this year reached in April and way below the $US230 a tonne prices seen a year ago. 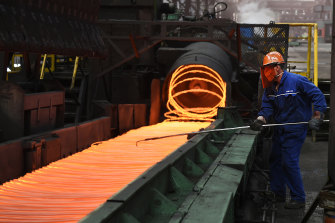 The proximate cause of the slump is Chinese steel mills cutting production. The mills had maintained their outputs at an annualised rate of more than a billion tonnes of steel until last month, anticipating that the central government’s efforts to stimulate the economy and kick-start a surge in infrastructure and construction spending would underwrite demand.

Instead, stockpiles of steel have swollen and the prices of rebar and other steel products have fallen heavily – rebar prices are down 20 per cent from early last month – and the mills’ profit margins have evaporated.

The big fall in the iron ore price is, obviously, bad news for major iron ore producers, including Rio Tinto, BHP and Fortescue and for Australia’s federal government revenues. While Treasury uses a very conservative reference price for iron ore prices of only $US55 a tonne, a $US10 movement in the price adds or subtracts about $6.5 billion from Australia’s GDP and $1.3 billion from corporate tax receipts.

It also, however, points to China’s continuing struggle to overcome the impacts on its economy of its “zero COVID” policies, which have seen some of its major cities placed under stringent lockdowns.

While some elements of those policies have been eased (in a tacit admission by the authorities that they had been too harsh and were having too great a social and economic impact) they haven’t been abandoned and continue to disrupt activity.

The imposition of mandatory regular mass testing is also disruptive and costly and, along with the cost of massive tax rebates and other measures designed to stimulate the economy – and a plunge in revenue from the still-depressed property sector – helped produce a record budget deficit of 2.9 trillion yuan (about $620 billion) in the first five months of this year.

Despite efforts to restart a construction sector ravaged by last year’s heavy-handed efforts to reduce the leverage of Chinese property developers, including lower interest rates and more credit being made available for property purchases, the sector remains depressed and the income from real estate that local governments, in particular, rely on has dried up.

Revenue from land sales and the Chinese equivalent of stamp duties was about 28 per cent lower in the five months to May than the same period last year. 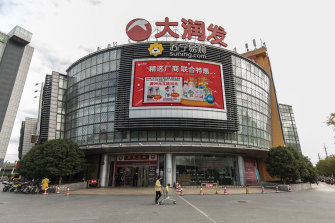 China’s economy has been battered by its zero-COVID policies. Credit:Bloomberg

With unemployment at uncomfortable levels and the uncertainties generated by the COVID policy, Chinese consumers have become cautious. Despite incentives, vehicle sales, for instance, have fallen almost 30 per cent this year.

The World Bank has revised down its forecast for China’s GDP this year from 5.1 per cent at the start of the year to 4.3 per cent, primarily because of its COVID policies. That might, however be optimistic given the way the entire global economy is slowing as the key central banks respond to surging inflation by raising interest rates and withdrawing liquidity.

The war in Ukraine, while gifting China an opportunity to buy cheap (relative to the global price) oil from Russia – it has been paying about $US35 a barrel less than the global price – has had spillover effects to LNG and coal prices that are forcing China, the world’s largest consumer of energy, to compete with the Europeans in an environment where the supply-demand equation is very tight.

It isn’t helping that China is experiencing economically disruptive record rains and heavy flooding in its south and an intense heatwave in its north.

Rising interest rates in Western economies and a divergence in monetary policies – the People’s Bank of China is in loosening, not tightening mode – have also triggered an outflow of foreign capital. The yuan has been depreciating against the US dollar, sliding about five per cent over the past two months.

The challenges China is confronting explain why there have been reports that Beijing is considering a new raft of policies to try to offset the impact of the higher energy costs on its industrial base, kick-start consumer demand and increase the incentives for new investment.

There is a sense of urgency, given Xi Jinping’s planned “coronation” later this year when he is expected to gain an unprecedented third term as party leader at the Communist Party’s national congress later this year.

While it is unlikely that his quest for an extension of his term and an elevated position in China’s history will be opposed, a floundering economy, with rising levels of urban unemployment and simmering discontent with his approach to COVID would take some of the gloss off the event.

If the authorities’ response to the challenges is more stimulus, particularly more incentives for infrastructure and property investment, the iron ore price could be expected to bounce back later in the year.

Australian producers are at the bottom of the cost curve and the upper end of the quality curve, which provides some insulation from whatever actions China might take.

The authorities must be hoping for an economic bounce because they are apparently still pursuing the concept of a single desk for iron ore purchases that was mooted earlier this year – a single or monopoly stated-controlled Chinese buyer of seaborne iron ore.

China’s dependence on imports of iron ore – particularly Australia’s iron ore – has long irked authorities suspicious of the producers and of the physical and derivative markets for iron ore from which prices are derived.

Unless the producers blink, however, China doesn’t have the leverage, yet, to force them to accept anything but prices that reflect supply and demand and the mills’ preference for the high quality (and lower cost) ore they can get from the Australian and Brazilian suppliers relative to what’s available to them elsewhere.

Late this decade, when production from Chinese-sponsored mines in Africa might enter the market, the balance of power might shift at the margin but the Australian producers are at the bottom of the cost curve and the upper end of the quality curve, which provides some insulation from whatever actions China might take.