Home » Economy » The bond market goes its own way

The bond market goes its own way

The bond market is asserting its independence. Buffeted as it is by an array of external forces and internal dynamics, the benchmark 10-year Treasury note has refused to kowtow to a strong economy, rising inflation, widening budget deficits and prospective interest-rate increases, all of which, in and of themselves, would have been sufficient in previous eras to send yields soaring.

Not this time. The 10-year Treasury TMUBMUSD10Y, +0.32% breached the 3% level definitively in May for the first time in more than four years, tried it out for a week or so before saying, thanks, but no thanks, and retreating to its comfort zone of 2.85% or thereabouts.

How can we explain the disconnect? Here is a summary of some of the explanations that have been offered.

1. The Fed is just plain wrong

The Fed has been well ahead of interest-rate futures markets in projecting increases in the federal funds rate. The fed funds futures market challenged the Fed’s optimistic projections for 2015 and 2016, both of which produced a single, 25-basis-point rate increase in the final month of the year.

The market was right then. Is it right now?

The Fed’s most recent “dot plot,” which reflects policy makers’ expectations for gross domestic product, inflation, the unemployment rate, and the funds rate over the next few years and in the long run, suggests two more 25-basis-point rate increases this year, three more in 2019, and one more in 2020. That puts policy makers’ median forecast for the funds rate at 3.1% (a range of 3%-3.25%) in 2019 and 3.4% in 2020, both of which are above what the Fed considers to be the longer-run neutral rate of 2.9%.

The fed funds futures market isn’t sold just yet on a December rate increase, putting the probability at 62%. And implied yields on contracts maturing in 2019 and 2020, while not as actively traded, are nowhere near the Fed’s projected path. 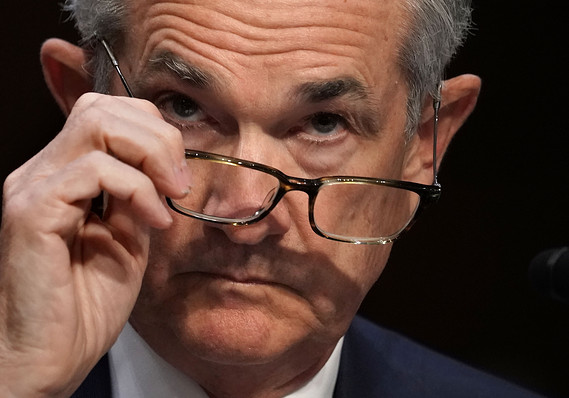 Whether the Fed sees it this way or not, the bond market holds all the cards. Why? Because unless long-term yields rise and give the Fed some breathing room, the fed funds rate will close in on and eventually exceed the long-term Treasury yield, causing the term spread to invert and the best-laid plans of central bankers to go awry.

Ever since the 2008 financial crisis, there has been an increased demand for safe assets, defined as assets that carry no credit risk and pay off a fixed amount at a specified future date. U.S. Treasuries fit that definition to a T. (No, a failure by Congress to raise the debt ceiling in a timely manner does not mean the U.S. government will fail to make timely payments of interest and principal on sovereign debt.)

Conservatives may think the U.S. government spends too much and has too much debt outstanding, but investors see things differently. What’s more, in response to financial regulations instituted in 2014, banks are now required to hold “enough high-quality liquid assets to cover expected net cash outflows during a 30-day stress period,” according to a primer on the new liquidity ratio requirements by Richmond Fed economists.

Once again, Treasury securities are among the most liquid assets that can be used to satisfy that coverage ratio.

Through several rounds of quantitative easing between 2008 and 2014, the Fed tripled its share of publicly held debt from 7% to almost 22%. Some analysts point to the Fed’s LSAP, concentrated on longer-term securities, as exerting a distorting influence on the yield curve.

All it took was a hint of a reduced pace of Fed purchases in June 2013 by then-Fed Chairman Ben to send the markets reeling. The so-called “taper tantrum” sent 10-year Treasury yields up 50 basis points in a matter of weeks and another 50 basis points by year end, when the actual tapering began.

Fast forward four years, and the Fed gave the market ample warning that it would begin to allow Treasury and mortgage-backed securities to mature at a gradual pace, starting in October 2017 with a combined $10 billion a month and increasing every quarter to $50 billion this month.

This time, there was no tantrum, no sell-off, no nothing.

Last week, the Bureau of Labor Statistics reported that the consumer price index rose 2.9% in June from a year earlier, the biggest increase in six years. Yet there was barely a flutter in the bond market.

The core CPI, which excludes food and energy prices, rose 2.3% in the last 12 months. Even the Fed’s preferred inflation measure, the personal consumption expenditures price index, has perked up in recent months, rising 2.3% in May from a year earlier. The core PCE price index, which the Fed thinks is a better indicator of future inflation, hit 2% in May for the first time in six years.

Why no reaction in the bond market? Base effect. The year-over-year calculations were inflated because of the unusually low readings from a year earlier, a result of “idiosyncratic factors,” according to the Fed.

When the low monthly readings from 2017 are dropped out of the equation, the year-over-year increase should look less threatening.

Besides, the Fed has stressed that 2% is a symmetric target for inflation. After consistently undershooting the target for six years, the Fed is probably relieved to learn that it finally hit the bulls-eye.

5. The expansion is living on borrowed time

The U.S. economy is in a sweet spot at the moment. As Fed Chairman Jerome Powell outlined in his semi-annual testimony to Congress on Tuesday, job growth and business investment are strong, inflation has finally moved up to the Fed’s target, and federal tax and spending policy are goosing an economy perceived to be operating at full employment. The expansion just entered its 10th year at a time when the Fed is removing its stimulus and the potential for a trade war is looming.

In other words, there is lots of room for a policy error.

And who, pray tell, generally sniffs out the danger ahead before policy makers get wind of it?

Why, that would be Mr. Market.