Home » Economy » Besides tariffs, here’s what else Trump calls ‘the greatest’

Besides tariffs, here’s what else Trump calls ‘the greatest’ 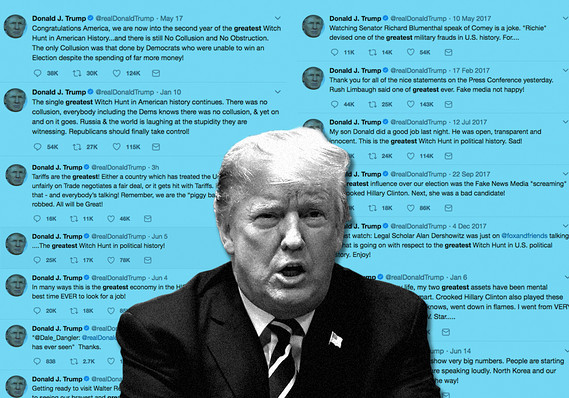 To the dismay of classical economists everywhere, President Donald Trump on Tuesday declared that tariffs are “the greatest.”

That usage implies the levies on American consumers are an end rather in themselves, than a means for achieving a goal.

Related: Tariffs are ‘the greatest,’ president says ahead of EU chief’s visit

But it might be worth noting that Trump isn’t shy about using the superlative. Here’s a roundup of what else Trump has applied the adjective to:

• He has frequently placed the word “greatest” in front of “Witch Hunt in political history,” his preferred term for the investigation by Special Counsel Robert Mueller into whether the Trump campaign colluded with Russia.

• Sen. Richard Blumenthal’s saying during a campaign that he served “in” the Vietnam War (he was a reservist) was “the greatest military fraud.” (The bone-spurs diagnosis that enabled the avid golfer to avoid being drafted has not earned that label.)

• The current U.S. economy, too, has been presidentially dubbed greatest.

Opinion: Today’s economy is almost as good as it was in 2014

• Usain Bolt, inarguably one of the greatest sprinters of all time.

• The U.S. military, described by Trump as “the greatest force for peace and justice in the history of the world.”

• Quoting Adam Levine of the Federalist as having said Trump is the greatest president the U.S. has ever seen.

For Trump, it seems, even more “greatest” things entered his field of vision before he took office than since:

• He himself might be, he said, the world’s greatest writer of 140-character missives, referencing Twitter’sTWTR, -3.39%character limit at the time (it was doubled to 280 characters late in 2017).

• His “mental stability and being, like, really smart” are, he famously tweeted, his greatest assets.

• Quoting the Washington Post as saying “Donald Trump’s birther event is the greatest trick he’s ever pulled.” (The story itself called Trump’s walk-back of the claim that President Barack Obama was born outside the U.S., and thus ineligible for the presidency, was a “low moment for politics and political coverage. A nothing-burger filled with falsehoods covered as though it was the Super Bowl.”)

• When Trump pinned Vince McMahon, the husband of Linda McMahon, today the administrator of the U.S. Small Business Administration, in the “Battle of the Billionaires,” as part of WrestleMania 23, that, too, was “the greatest of all time.”

• Windmills — here, actual windmills, and not the wrestling technique — were called the “greatest threat in the U.S. to both bald and golden eagles.” Poisoning, electrocution, lead and habitat destruction are, in reality, greater killers of bald eagles.

• The Turnberry golf resort he called “the greatest golf course in the world.” Trump’s two Scotland developments lost money for three years in a row, according to British financial disclosure forms;

• Obamacare was called “the greatest job killer in U.S. history.”

• Obama was labeled China’s “greatest asset” in connection with Trump’s false assertion that China’s economy in 2014 was going to surpass the U.S. economy in size.

• The “greatest commodity to own”? Land, per Trump, since it is finite.