The childcare sector is facing a staffing crisis with the number of job vacancies more than doubling since before the COVID-19 pandemic, pushing up rates for nannying and casual babysitting to as high as $45 an hour.

National figures from employment marketplace SEEK show a 40 per cent increase in job advertisements for early childhood teaching jobs and a 34 per cent increase for childcare and outside school hours care jobs from April 2021 to April 2022. 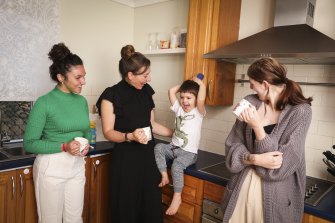 Jessica Seen, a Sydney client of 99aupairs, with son Charlie, 3. Her new au pair Giulia Spinelli (green top) is from overseas and her departing au pair Madeline Warr is from Australia, and will take up another placement in Melbourne.Credit:Renee Nowytarger

The trend over time shows demand for childcare staff plummeted during the 2020 national lockdown and 2021 NSW and Victorian Delta lockdowns. Yet, each time, the sector recovered with even higher vacancies than before the fall, reflecting the fact workers were quitting the industry to seek better pay and conditions.

“Childcare is not well paid and that makes it hard for [employers] to compete for workers in a tight labour market,” Coates said. “It’s pretty straightforward – if you want to compete to attract those workers, then you’re going to have to raise wages.”

The award wage for a childcare worker is $25.26 an hour in the third year of a Certificate 3 qualification.

Coates said higher wages could either be paid by the government or passed onto the end user, but the latter would make childcare less attractive for working families and impair workforce participation.

He said immigration could be part of the solution, but this could also risk driving down wages and making the industry even less attractive. He noted the sector did not traditionally rely on overseas workers, given few childcare workers were on temporary visas in the 2016 census.

Nanny agencies and the Find a Babysitter website suggest the going rate for a nanny in Sydney ranges from $25 to $40 an hour, depending on experience and qualifications. The asking price for casual babysitting in the evening is as high as $45 an hour. 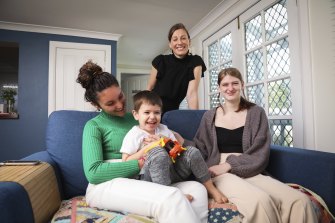 Daniela Kavoukas, services manager at the Community Child Care Association, which represents the community and not-for-profit sector, said educators were “leaving in droves” and described the situation as a crisis.

“COVID was a moment where I think the whole of Australia and possibly the world made a decision to go, ‘actually, maybe it’s time for a career change’, and so we saw people leave who haven’t come back,” she said. “A lot of people are just completely burnt out.”

This was the case in other industries as well, in what has been dubbed the “Great Resignation”. Australian Bureau of Statistics figures on job mobility show 1.3 million Australians changed jobs in the year to February 2022, or one in 10 employed people – the highest rate in a decade.

A United Workers Union survey in 2021 found that 37 per cent of early childhood educators did not plan to stay in the industry long term, and three out of four of those who planned to leave would do so in the next three years. The biggest reasons were excessive workload and low pay.

Cathy Clark, the founder of My Little Friend nanny agency, said there was also a shortage of nannies.

Clark said this was exacerbated by the pandemic because there were still few international students and working holidaymakers in Australia, and many local workers had left the industry after losing work during lockdowns.

Clark said most families chose not to employ a nanny while they were working from home and demand for babysitters had been low because people were not going out as much, so young people had taken other jobs and would not return.

But Clark said there had always been a nanny shortage because of underlying problems with pay and conditions.

“If you’re only earning $30 an hour, you cannot afford to live in the eastern suburbs, which is where a lot of the work is, so your costs of getting to work are high with petrol and road tolls,” Clark said.

“If you have to travel an hour and a half to get to work to start at 7am, you have to leave home at 5.30am, so it’s not a super-appealing job.”

Clark said employing a nanny should be tax-deductible for families, which would provide an incentive to employ staff properly and pay them holidays, sick leave and superannuation.

Irene Becker, chief executive of agency 99aupairs, said she pivoted her business to attracting Australian young people to work as au pairs when the international borders were closed.

“For the overseas au pairs, it’s mainly about improving their language skills and experiencing Australian culture, but locals have different motivations,” Becker said.

“They might be wanting to move out of home, and they’re also considering career choices, so we try to match them with families that live the life of their future career – if they want to go into nursing, we’ll place them with doctors, for example.”

Becker said the young people worked 15 hours to cover room and board, and were paid at least minimum wage for any hours above that.