Home » Economy » Apple and Microsoft are slowly killing their competition — like real-life versions of the Death Star, according to NYU professor Scott Galloway

Apple and Microsoft are slowly killing their competition — like real-life versions of the Death Star, according to NYU professor Scott Galloway

They started out benign, a group committed to peace and prosperity in the galaxy. Slowly, they aggregated power and, wanting to maintain that power, turned to the dark side. They built a weapon 900km in diameter, staffed by hundreds of thousands of personnel and robots. Of course I’m talking about the DS-1 Orbital Battle Station commanded by Governor Tarkin — and also Amazon, Apple, Facebook, Google, and Microsoft.

Governor Tarkin destroyed the planet Alderaan outright. But with his second Death Star, he checked back a bit, recognizing the blatant destruction of a planet made you much less likable, and subject to antitrust scrutiny. 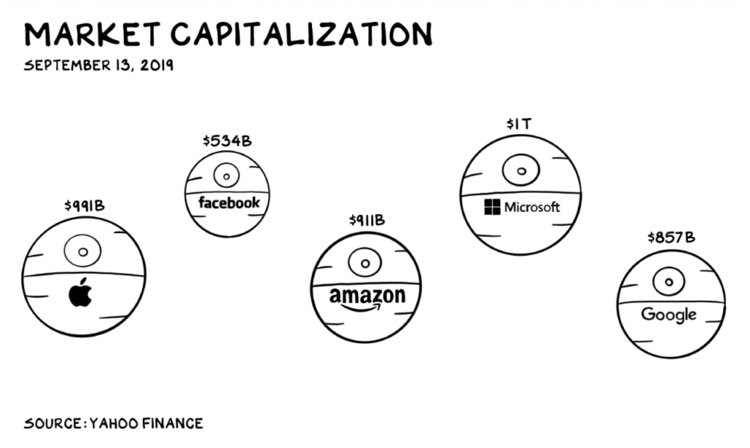 The Death Star has multiple reactors, which, when united, can cause the total destruction of a planet. But when trying to destroy something specific, Governor Tarkin orders a single-reactor ignition. This is still overkill for a city or a base, but nowhere near enough power to destroy an entire planet.

After obliterating Netscape and inviting antitrust action, thethen-fastest growing company in history, Microsoft, decided to kill other planets/firms more slowly. The Seattle giant has turned a single-reactor laser on Slack, the cloud-based team collaboration software. Made by a gaming firm that hacked a better way for teams to work together, the software has captured a loyal following, includinghalf of the top-100 companies. At our firm, I clearly don’t get it — for a host of reasons — as evidenced by my refusal to give up email and start slacking everyone. When I’m on Slack, similar to Snap, I feel I’m going to slip and break a hip.

Slack has carved out a great business with all the makings of a giant — recurring revenue, network effects, explosive growth.

Via a direct listing, bypassing bankers, Slack began trading last month (NASDAQ: WORK), garnering a market capitalization of$19.5 billion, a value similar to Kroger. But the reactors have been fired up at Microsoft, and since the IPO, Slack has shed 33% of its value. Some of this, regardless of the threat of imminent destruction, is that, at 49x revenues, the company was likely overvalued. However, the chart below is what a superlaser from a moon base looks like. 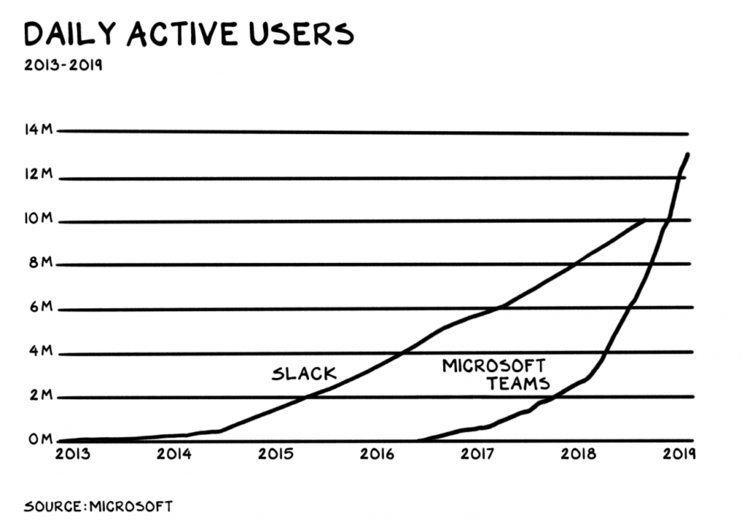 Microsoft is bundling their collaboration tool, Teams, with Microsoft Office and charging as little as $5 per user (for the basic subscription) vs. Slack’s $6.67. I’m sure Microsoft would like to turn on multiple reactors and make Teams free and ubiquitous across all Windows devices, similar to Internet Explorer. But Microsoft doesn’t want to give everyone déjà vu of the nineties. Not awesome déjà vu — Robin Williams or the Taco Bell Chihuahua, but Blockbuster late fees on Cousins (Ted Danson’s cinematic peak) déjà vu.

Slack is a great product and a great company, and it will shed another 20-50% of its value in the next six months as the Seattle Death Star comes in clearer view. If Microsoft wants to go full Celine Dion on Slack, they’d offer it for free and train their sales reps to spread fear among CTOs, convincing them that Slack is a security risk.

But Microsoft would be better off to kill it slowly. Satya (so likable!) has done a formidable job recasting the firm as Anakin Skywalker’s ghost, hanging with Yoda in tech heaven. It may take years or happen in an instant. I worry the superlaser has already left the Microsoft moon base. It’s just a matter of time — a brief respite, as even light takes a minute to travel 11 million miles. But the laser is on its way.

The Death Stars of our modern economy can obliterate planets. A single reactor fire has hit Spotify from Apple, as they control the distribution (app store) and are neutering the Swedish firm. Planet Spotify has been rendered sterile and now needs to find other business models — original content, podcasts, or controlled distribution via its own device.

The shocker for me in the recent launch of Apple TV+ was that in 2018, the estimated spend on original content from Apple was pegged at a cool$1 billion. But last month they announced$6 billion for original content. So, a tech hardware firm is devoting the same capital to shows with Reese Witherspoon and Jason Mamoa as the state of Californiaallocates to the 23 campuses that make up the California State University system. If it sounds as if we’re living in a dystopia, trust your instincts.

Apple TV+ will be all original content, at $4.99/month. For every $1 that you spend a month, the company spends $1 billion on content a year, just like Netflix, so Apple is “disruptive.” The greatest unlock, other than Prime, in the history of business was Apple’s decision to go vertical with a multibillion-dollarinvestment in stores to control the brand. They’ve made a similar investment here, with a nod to what’s still their core asset, the brand. Even if the quality of the content isn’t HBO-like, not having Daddy’s Home 2 next to original content sends a cleaner brand message. Apple continues to be the benchmark of brand management.

The superweapon is an installed base built via vertical distribution. The only firm that has been able to achieve near-Death Star status, without controlling the distribution, is Netflix. Reed Hastings is a first-ballot Hall of Fame business rockstar. I now believe Netflix will likely shed value over the next three years as Death Stars begin to bundle content across their own devices, distribution, and loyalty programs.

The gangster move would be if Netflix acquires Sony, capturing a ton of content and vertical distribution — game consoles and TVs. The streaming giant could then offer the grand bargain rundle and, for $29, $39, or $49/month, provide households with Netflix on all their entertainment appliances — different levels (silver, gold, and platinum) depending on how cool the appliance.

Apple is also in a position to offer a Prime-like rundle. Just send me the latest iWhatever (Mac/pods/watch) with unlimited media cued up for $50/month. Firms have yet to fully exploit the arbitrage between the pace of time, and our perception of the pace of time.

The rebel force here is capitalism, which depends on a more robust ecosystem and competition. The dark side has forced capitalism to the ice planet Hoth. Princess Leia ( Margrethe Vestager) has rallied her forces. But without an army of Jedi, we are doomed to an economy of darkness: inequality,teen depression, tax avoidance, and the co-opting of our government by private influence — a key step to tyranny. DC has turned to the dark side, and is the servant of emperor Palpatine.

It’s not too late. We see the light in you, our elected officials. The48 attorneys general who came together this week and announced they are making plans to break up the search engine Death Star, may be the turning point in the rebellion. If tech monopolies are broken up, our economy would have more hiring, a broader tax base, more competition, more secure elections, and less teen depression. Search your feelings. You know this to be true.

Life is so rich,

Scott Galloway is a professor of marketing at the NYU Stern School of Business. He was named one of the world’s 50 best business school professors by Poets & Quants in 2012. A serial entrepreneur (Red Envelope, L2), he has written two books, The Four: The Hidden DNA of Amazon, Apple, Facebook and Google and The Algebra of Happiness. His weekly business videos atSection4 andWinners & Losers have generated millions of views.

Section4 makes you sound smarter at cocktail parties … and at work.Sign up for original thinking from Scott and his team.