New York (CNN Business)Restaurant chains that lost customers during the pandemic are desperate to bring them back. So they’re starting to roll out aggressive deals.

Both Red Lobster and IHOP launched new promotions this week. Red Lobster’s Daily Deals offer a different promotion every weekday: endless shrimp for $17.99 on Monday, two lobster, shrimp and salmon meals for $49.99 on Tuesday, and so on.
At IHOP, diners who eat at the restaurant get a daily deal during “IHOPPY Hour,” which lasts from 2 PM to 10 PM or later. During that time, customers get entrees for $5 or $6, snacks and sides for $3 and drinks for $1 or $1.50, depending on location. Last week, Applebee’s announced a promotion that lets customers add 12 shrimp to a steak order for $1. IHOP and Applebee’s are owned by Dine Brands (DIN).

When the pandemic hit, restaurants focused on delivery, drive-thru, curbside pickup and contactless payment to try to make customers feel safe and keep them coming back. They also had to focus on modifying their menus and adjusting to new regulations. Now, they have another challenge: How to get people to order restaurant meals during a recession with high rates of unemployment. 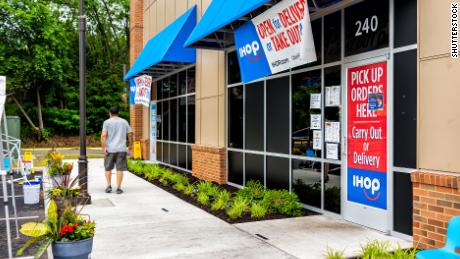 “A lot of restaurant companies are scrambling to promote value … as we shift from Covid concerns to more macro concerns,” said Morningstar restaurant analyst R.J. Hottovy. The types of promotions that restaurants are offering this year are different from before the pandemic, he said, with a heavier focus on bringing people into restaurants or offering promotions on group or family meals instead of discounts for individuals.

When customers come in for deals, they often end up spending on extras like appetizers, sides or beverages. The strategy may help casual dining restaurants, especially now.
Casual dining chains, which are pricier than fast food restaurants and have long marketed themselves as sit-down eateries, have struggled during the pandemic. Sales at US restaurants open at least a year fell 59% at IHOP and 49% at Applebee’s in the three months that ended on June 30, 2020, for example. Some chains, like Sizzler and Chuck E. Cheese’s parent company CEC Entertainment, have already filed for bankruptcy.
Those restaurants may have caught a break with outdoor seating this summer, said Andrew Charles, a restaurant analyst with Cowen. But now that temperatures are cooling, they’re looking for new ways to attract customers.
“A lot of these folks are looking to get more aggressive on value to help better understand how they can protect traffic,” he said. Restaurants are also offering deals in exchange for user information through digital rewards programs.
For fast food restaurants, price cuts “haven’t been that aggressive just yet,” Charles said. But over the summer, many said that they anticipate that customers will start prioritizing affordability.
“For our customers, while safety is a top concern, the need for value and convenience is also on the rise,” said McDonald’s (MCD) CEO Chris Kempczinski during a July analyst call. Wendy’s (WEN) CEO Todd Penegor noted in an August call that “value is going to play a key role for customers during this challenging time.” Because of that, the company added its spicy chicken sandwich to its 4 for $4 platform, he said.
“Right now you’re seeing a lot of focus around that $4 to $6 price point,” Cowen’s Charles said.

Fast food chains might not want to slash prices much lower than that, he added, noting that in 2018 many slashed prices below $3 — and the strategy backfired.
“It didn’t drive the incremental traffic and it also eroded franchisee margins,” he said. “They want to avoid that.”
Source: Read Full Article