The winter storm that barreled across much of the United States over the holiday weekend severely disrupted businesses including large car factories, retail chains and the delivery services that people are deeply reliant on for basic necessities.

General Motors, Ford Motor, Toyota, Nissan and other automakers suspended or shut down production at plants from Texas to Indiana as rolling blackouts, natural gas shortages and icy conditions made it difficult to keep assembly lines running.

Walmart was forced to close as many as 500 stores across the South and Midwest, according to a map that was being updated in real time on its website. Pharmacy chains also shut stores, potentially making it harder for customers to collect prescriptions and also delaying vaccinations against the coronavirus, which had begun at many pharmacies at the end of last week.

Publix, a grocery and pharmacy chain that operates across the South, said on Tuesday that it had to delay vaccinations in Florida because vaccine shipments were delayed by the storm. CVS said it had closed about 775 stores. Walgreens said around 200 stores in Texas were closed because of power disruptions.

The storm dealt a blow to huge economic hubs that are accustomed to hurricanes and tornadoes but not extreme winter weather that strains power grids and sends temperatures well below averages for this time of year.

“I was born in Fort Worth in 1956, and I’ve never seen weather this bad for this long,” said George Westhoff, president of Midland Manufacturing, a Fort Worth company with 40 employees that makes well cylinders and other metal products. “I’m not sure how much of my equipment would start up under these cold conditions,” he said, noting that he was the only person at his plant on Tuesday.

Because millions of people have been working from home during the coronavirus pandemic, winter storms may not have quite the economic cost they once did. But the loss of power can sever the internet connections that people need to do their jobs. PowerOutage.us, a site that tracks electricity disruptions, said that, of the 12.5 million customers it tracks in Texas, 3.2 million were without power on Tuesday.

Managers of the electricity grid in Texas and elsewhere have had to order rolling blackouts after many power plants were forced offline because of icy conditions and some could not get sufficient supplies of natural gas. Some wind turbines also shut down. At the same time, demand for electricity and natural gas has shot up because of the cold weather.

“What’s complicating things is that huge swaths of Texas have lost power,” said Michael Trevino, a vice president at the Dallas Regional Chamber.

Group 1 Automotive, a big chain of car dealerships based in Houston, has closed many of its franchises in Texas and Oklahoma.

“Our office doesn’t have power. Dallas is snowed in. Oklahoma is snowed in. Houston is icy,” said Pete Delongchamps, a senior vice president at the company. He is hunkering down at home, where both power and water are out. “It’s blankets and water jugs.”

Some companies kept operating. Raytheon Technologies, a large aerospace and military contractor, said Tuesday that its facility in McKinney, Texas, was open. And Home Depot and Costco stores in Southlake, a suburb of Dallas and Fort Worth, were open Tuesday.

Christina Cornell, a Home Depot spokeswoman, said over 100 stores in Texas and elsewhere were closed or operated with reduced hours on Monday but the majority of them reopened Tuesday. She added that all Home Depot stores in the United States have backup generators that allow them to operate basic services during blackouts.

The storm has caused extensive delays across the vast package delivery networks that many people now rely on as shopping has shifted online.

FedEx said winter weather had caused “substantial disruptions” at its Memphis hub, which is the company’s largest center, occupying 800 acres, and is normally capable of sorting nearly half a million documents and packages an hour. FedEx added that delays were possible across the United States for Tuesday deliveries.

UPS said weather could cause delays in areas not directly hit by the storms. Packages may take longer to get from one place to another, and many delivery services move goods through big sorting hubs in the middle of the country to serve both the East and West Coasts. UPS’s main air hub is in Louisville, Ky., and it also has a hub in Dallas, for example.

The winter storm prompted the United States Postal Service to close post offices, processing hubs and other facilities in Texas, Alabama and Mississippi, according to its website.

The storm has also affected Amazon, which operates its own large logistics network that includes planes, hubs and delivery vans operated by contractors.

“The health and safety of our employees, customers and the drivers who deliver packages is our top priority,” Maria Boschetti, a spokeswoman, said in a statement. “Out of an abundance of caution and to ensure everyone’s safety, we have closed some of our sites in Arkansas, Illinois, Oklahoma, Missouri, Tennessee, Texas, Indiana and Kentucky.”

Some automakers said they shut down operations in an effort to limit their energy use. Ford closed a plant in Claycomo, Mo., near Kansas City, Mo., this week “to ensure we minimize our use of natural gas that is critical to people’s homes,” a company spokeswoman said.

The plant produces the F-150 pickup truck, one of the industry’s best-selling vehicles. Ford doesn’t plan to resume normal operations at its shuttered plant until Monday. The factory employs about 7,300 people. Union workers will be paid 75 percent of their gross pay for the week.

Nissan closed its four U.S. plants on Monday and canceled the morning and afternoon shifts on Tuesday, a spokeswoman said. Two of the plants, in Canton, Miss., and Smyrna, Tenn., make cars and the other two, both in Decherd, Tenn., make engines. The company is monitoring the situation to see if it can resume production Tuesday night.

General Motors said Tuesday that it was not affected by the natural gas shortage but that it was still suspending the first shift at four plants in Tennessee, Indiana, Kentucky and Texas because of “the significant winter weather conditions.” 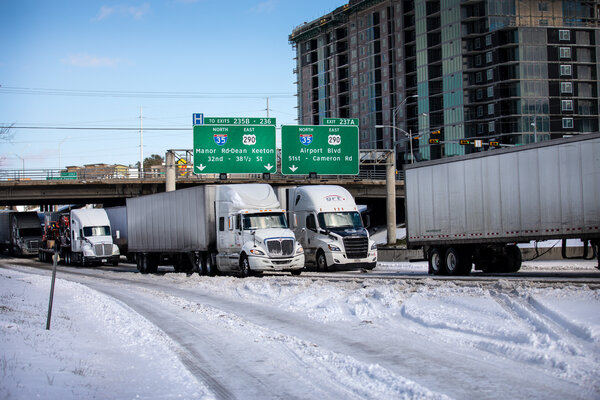 Toyota Motor canceled the first and second shifts at five factories, including its largest U.S. plant in Georgetown, Ky., and a pickup truck plant in San Antonio, because of the winter storm and energy disruptions it caused. The other three plants are in Kentucky, Indiana and Mississippi.

Honda canceled or suspended late shifts on Monday and early shifts on Tuesday at plants in Alabama, Georgia, Ohio and Indiana. The company is planning to resume production Tuesday night at all but its Alabama car plant, where Tuesday evening’s shift has also been canceled.

The shutdowns add to troubles for Ford, G.M. and other automakers that have separately had to idle plants because of a global semiconductor shortage. The chip shortage is expected to reduce the profit of automakers by billions of dollars this year.

Some companies are looking forward to a surge of business after the bad weather passes.

Mr. Delongchamps, the Group 1 Automotive executive, said, “We will probably see a pickup in body shop business and repairs, from people whose cars got banged up or frozen.”