Home » Business » Why plans for a bigger, faster version of the F-16 didn't pan out

Why plans for a bigger, faster version of the F-16 didn't pan out

For more than 40 years, the F-16 Fighting Falcon has served as the backbone of the US Air Force’s fighter fleet, but one year before the first F-16 entered service, the team behind its development had already developed a better F-16, in the F-16XL.

The fighter was so capable, in fact, that it went from being nothing more than a technology demonstrator to serving as legitimate competition for the venerable F-15E in the Air Force’s Advanced Tactical Fighter program.

Ultimately, it would lose out to the F-15E based on production cost and redundancy of systems, but many still contend that the F-16XL was actually the better platform.

While that assertion may be subject to debate, there’s little debate as to whether the F-16XL could have been one of the most capable 4th-generation fighters on the planet. 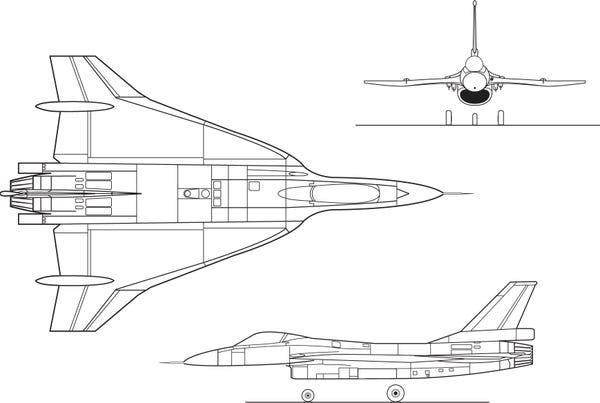 In 1977, some three years after the first F-16 took to the skies and one year before it would enter service, its designer began work on what would come to be called the F-16 SCAMP, or the Supersonic Cruise And Maneuver Prototype.

The effort wasn’t about fielding another production fighter — General Dynamics had no intention of trying to sell SCAMP once it was complete. Instead, the entire premise behind the program was to quickly (and cheaply) field a platform they could use to test the concept behind supersonic cruising, or as we’ve come to call it today, “supercruising.”

While that may sound like a capability found only on Transformers or Harleys so expensive only lawyers can buy them, the idea behind supercruising was simple, even if its execution was complex. Modern fighters like the F-16 all come equipped with afterburners they can use to dramatically increase the amount of thrust their engine produces, but it comes at a serious cost.

Using the afterburner to break the sound barrier and then sustain that speed depletes an aircraft’s fuel very quickly, but if a jet could kill the afterburner at supersonic speeds and still maintain them, it would mean covering more ground at high speed, while still having enough fuel left over for a fight and the return trip home.

“I remember flying in an F-16 in afterburner while supersonic over the Yellow Sea and looking down to see a fuel-flow rate of over 50,000 lbs per hour,” F-16 and F-35 pilot Justin “Hasard” Lee explained in a piece for Sandboxx News.

“To put that into perspective, that’s similar to a fire-hose operating fully open—and that’s just a single engine. A twin-engine jet such as the F-15 or F-22 can double that. The problem is, topped off, I could only carry 7,000 pounds of fuel which was enough for me to fly at that fuel-setting for less than 10 minutes.”

In order to accomplish their goal, the F-16 design would require a pretty thorough revamp. First, the wings were modified to incorporate a cranked-arrow wing shape, creating 25% more lift while allowing for effective control at both high and low speeds.

Working in conjunction with NASA (and using the company’s own funds), engineer Harry Hillaker, the same man responsible for the original F-16 design, experimented repeatedly with slightly different iterations of the wings until they came to a version they referred to as Model 400.

This new wing design, which saw a 50-degree angle near the root of the wing for supersonic performance and a 70-degree angle where the wings extended for subsonic handling, offered more than double the surface area of the F-16’s wings. Incredibly, Hillaker and his team were able to manage that without any increase in drag on the airframe — thanks to more than 3,600 hours of wind-tunnel testing.

This new design wasn’t necessarily practical, with all-moving wingtips and an all-moving vertical tail meant for control that performed poorly at low speeds. The wing design also didn’t allow for any hardpoints to mount bombs or missiles.

However, impractical as it may have been for a tactical fighter, the new wing design led to a significant increase in fuel range — and that increase could be further bolstered by leveraging the massive amount of internal space these new wings offered. 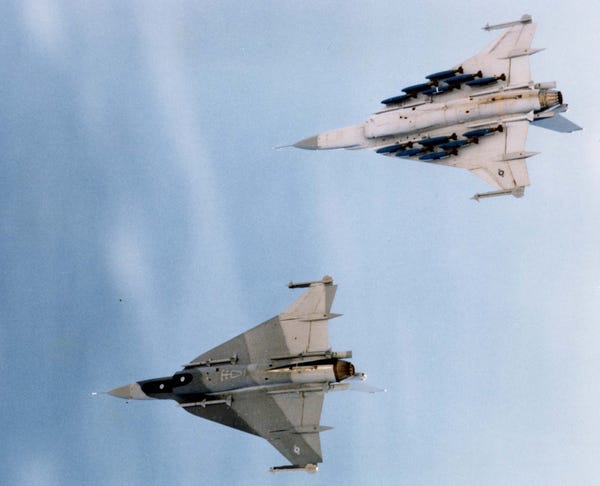 Citing the promising results of the F-16 SCAMP effort, the US Air Force chose to buy into the idea of an even-more capable version of the F-16. They provided Hillaker with two early F-16 airframes for conversion into a SCAMP-like design they dubbed the F-16XL.

Although this new jet would be largely based on the existing F-16, the changes were dramatic, including two fuselage sections added near the front and back of the aircraft, increasing its length by some 56 inches. The cranked-arrow wings that had proven so effective in SCAMP were also added, along with a new form of wing skin made using carbon fiber that saved some 600 pounds in the design.

Those massive wings, now fully realized, gave the F-16XL a nearly doubled fuel capacity, and the additional lift coupled with 633 square feet of underwing space to leverage allowed for the addition of an astonishing 27 hardpoints for ordnance.

Remarkably, the F-16XL seemed to outperform its smaller predecessor in nearly every way, prompting the Air Force to take an interest in the idea of actually building this new iteration fighter.

“To say that Hillaker’s design team achieved its objectives is an understatement,” wrote F. Clifton Berry Jr. in 1983. Berry was an Air Force veteran and the editor-in-chief of Air Force Magazine at the time.

As Berry pointed out, an F-16XL conducting an air-to-surface mission could carry twice the payload of the standard F-16 and still fly as much as 44% further–all without external fuel tanks and while carrying a full suite of air-to-air weapons (four AMRAAMs and two AIM-9 Sidewinders) for the fighter to defend itself.

If you were to equip the F-16XL with the exact same payload as an F-16A on such a mission, the F-16XL could fly nearly twice as far as its predecessor.

But it wasn’t just about extended range and added payload. The F-16XL was capable of supersonic speeds at high or low altitudes, all while carrying its mighty payload, and had no trouble climbing quickly with bombs underwing.

And even despite the added wing, fuel, and ordnance loads, the aircraft still somehow managed to fly 83 knots faster than the F-16 using military power at sea level, and more than 300 knots faster on afterburner at high altitudes, even while carrying a full bomb load.

“With the heavy bomb load aboard, the F-16XL is cleared for maneuvers up to +7.2 Gs, compared with 5.58 Gs in the F-16A,” Berry wrote. “This demonstrates how the designers were able to increase the aircraft weight while maintaining structural integrity and mission performance.”

All that time in the wind tunnel clearly paid off for the F-16XL design. 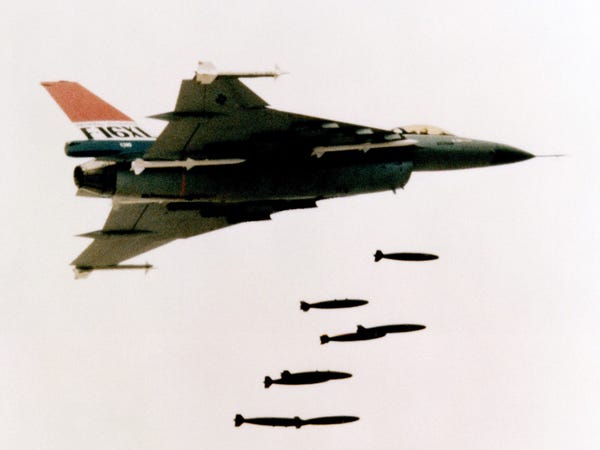 General Dynamics ultimately built two prototype F-16XLs for testing, but as testing progressed, it was clear that this new iteration of the F-16 design was worth more than simply demonstrating technology.

In search of a useful place to put the new jet’s capabilities, the Air Force decided to enter it into the Enhanced Tactical Fighter (ETF) competition, which aimed to field a capable replacement for the F-111 Aardvark.

“The F-16XL flight-test program has conclusively demonstrated that the XL performs as predicted. This performance level represents a significant increase in mission capability for USAF,” D. Randall Kent, Vice President and Program Director for the General Dynamics F-16XL program, said at the time.

“Coupling this with the affordability and low risk of the F-16XL presents USAF with a viable way to increase mission capability while simultaneously growing to a forty-wing TAC force structure.”

Soon, the ETF program changed names to the Dual-Role Fighter program — but despite the shift in titles, the goal was the same: To field an aircraft capable of penetrating deep into enemy airspace for interdiction missions without the need for fighter escorts.

The F-16XL, with its significant fuel range, good performance, and hardpoints for 27 weapons, seemed like a perfect fit for the job … but it wasn’t the only aircraft competing for the contract. Standing between the F-16XL and operational service was another highly capable platform: The F-15E Strike Eagle. 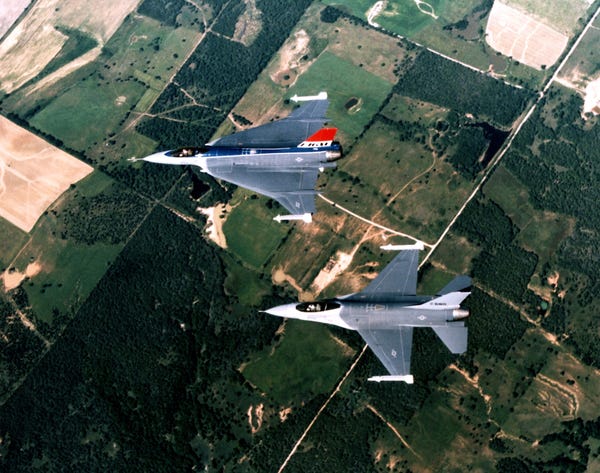 Like the F-16XL, the Strike Eagle was a modified version of an existing fighter: the F-15 Eagle. The Eagle represented America’s top-of-the-line air superiority fighter, boasting an undefeated record in dogfights that holds to this very day.

Unlike the F-16XL, however, the F-15E shared the vast majority of its design with the two-seater F-15D that was already in production.

There was no doubt that the F-16XL would likely be the more expensive option, thanks to its significant design departure from the F-16 it was based on.

But it also offered a great deal of capability. Its massive wings made it more stable than the F-16 it was based on, while its wind-tunnel-tested design made all that wing area serve no detriment to the fighter’s handling.

“We climbed at more than 20,000 feet per minute, leaping from 4,000 to 27,000 feet in sixty-seven seconds. Jim eased the power back while turning into the supersonic corridor and getting cleared by Edwards Control to begin a supersonic run,” F. Clifton Berry wrote after riding in the F-16XL.

“Jim applied afterburner and the aircraft accelerated smoothly from Mach 0.95 through 1.0 and to 1.2 in seconds. Even with the heavy bomb load aboard, the aircraft went supersonic without a tremble. Handling characteristics at mach 1.2 with the heavy ordnance load were remarkably similar to those of the standard F-16 without bombs.”

Most importantly, however, the F-15E leveraged not one, but two engines. Because these aircraft were intended to fly deep into enemy airspace without much support, the Air Force believed it was likely that these planes would see a great deal of anti-aircraft fire.

Having two engines meant one could be damaged by enemy fire, but the aircraft could still limp home on the other. 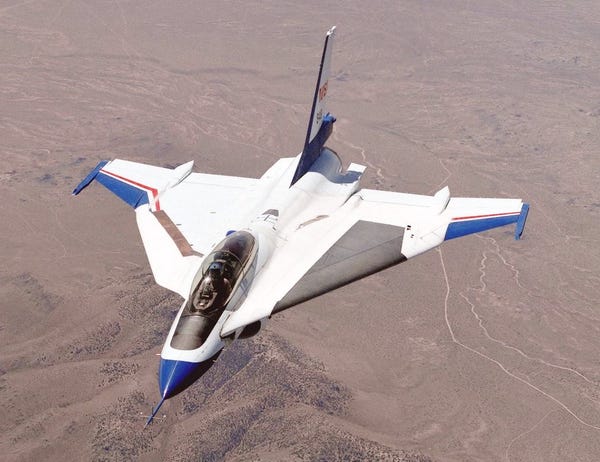 It was likely the perceived survivability of two engines, in conjunction with the lower cost of development, that saw the F-15E win the contract. But many within the Air Force saw the F-15E’s win as bittersweet.

The Strike Eagle was indeed an incredibly capable platform, but the F-16XL’s fans felt as though the fighter wasn’t meant to compete with the Strike Eagle, so much as support it–much like the F-16 and F-15 support one another today.

Like the YF-23 that lost to Lockheed Martin’s F-22 Raptor, the F-16XL has since been remembered as an aircraft that might have been better than the jet we ultimately got … with concerns about dollars and cents making the decision, rather than maximum capability.

Of course, that may not be an entirely fair assessment. The F-16XL was indeed a capable aircraft, but the F-15E has since proven itself in combat time and time again. The Strike Eagle was clearly not a bad choice, but with the F-16XL’s incredible chops in mind, there could be little doubt that the Air Force would have been better off with both of these capable fighters in their stable… if only money truly were no object.

Instead of fighting alongside the Strike Eagle as many hoped, the F-16XL program found its way to NASA, where both prototypes participated in a number of aeronautical research projects. In fact, some of the tests conducted using the F-16XL would go on to play a role in developing the supercruise capability for America’s top-tier air superiority fighter of today, the F-22 Raptor.