Home » Business » Who Are the Senior Officials at the Pentagon and the N.S.A?

Who Are the Senior Officials at the Pentagon and the N.S.A?

WASHINGTON — A purge of the senior civilians at the Pentagon and the ascension of a similar hard-line policy official to a top job at the National Security Agency have prompted concerns that the Trump administration may be planning new punishments for Iran and releasing classified documents about President Trump’s interactions with Russia.

Here are the four new officials.

Performing the duties of the under secretary of defense for policy 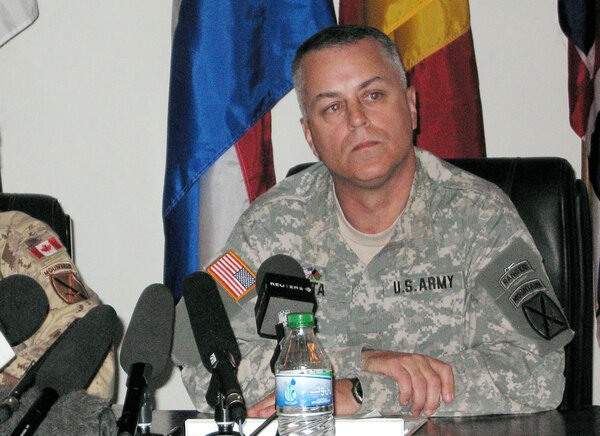 Anthony J. Tata’s nomination to be the Pentagon’s top policy official appeared to be doomed over the summer after senators from both parties voiced opposition to his selection, largely because of his history of inflammatory comments.

But in an end run around the skeptical senators, the Trump administration appointed Mr. Tata, a retired Army one-star general turned Fox News commentator, to a temporary senior position in the same Defense Department office. This job did not require Senate approval.

Mr. Tata’s rise continued on Tuesday when an abrupt shake-up of Pentagon personnel bumped him into the original job Mr. Trump had picked him for, albeit with certain strings attached. Mr. Tata became “the senior official performing the duties of the under secretary of defense for policy,” as the Pentagon announcement put it.

Mr. Tata’s views, expressed in a series of tweets, drew angry denunciations from both Democrats and Republicans. He called Islam “the most oppressive violent religion” and referred to President Barack Obama as a “terrorist leader.”

“Anthony Tata has no business working in the Pentagon in any capacity,” Senator Kamala Harris, a California Democrat who is now the vice president-elect, tweeted in August. “His vile Islamophobic comments are disqualifying, period. Our service members deserve better from their leadership.”

Mr. Tata has since apologized for the remarks, but at least three senior retired officers dropped their support for him after the messages were made public.

Undeterred by the setbacks, Mr. Tata endeared himself to the president using a tried-and-true method: praising Mr. Trump on Fox News and bashing his political opponents.

With fewer than 70 days left in the Trump administration, it is unclear what effect Mr. Tata will have on Pentagon policy, which often takes months to determine in the best of times. Mr. Tata’s acting capacity also places constraints on what matters he can authorize on his own and which he must kick up to his new boss, the acting defense secretary Christopher C. Miller. —Eric Schmitt

Acting under secretary of defense for intelligence and security

Ezra Cohen-Watnick, 34, was a little-known young aide at the Defense Intelligence Agency before he gained attention in early 2017 after taking a job in the Trump administration, where he served as the National Security Council’s director for intelligence programs under the president’s first, short-lived national security adviser, Michael T. Flynn. In that post, he told other administration officials that he hoped to use covert action to help topple Iran’s clerical government.

After Mr. Flynn resigned under pressure, the new national security adviser, Lt. Gen. H.R. McMaster, sought to push Mr. Cohen-Watnick out of the White House — but was thwarted by the president’s son-in-law, Jared Kushner, and Stephen K. Bannon, then Mr. Trump’s senior strategist.

General McMaster eventually prevailed, but the struggle helped make Mr. Cohen-Watnick a hero figure to anti-establishment Republicans and believers that a so-called deep state in United States intelligence agencies was out to topple Mr. Trump.

Before leaving the White House, Mr. Cohen-Watnick, at the instruction of two senior White House officials, discovered and helped print intelligence reports about the federal investigation of the 2016 Trump campaign that were then provided to Representative Devin Nunes of California, the top Republican on the House Intelligence Committee. Mr. Nunes cited those reports as evidence of improper behavior by Obama administration officials.

Mr. Cohen-Watnick next worked in the Washington office of the software giant Oracle, whose chief executive and other senior executives are supporters of Mr. Trump.

He returned to the administration in May, this time to the Pentagon as deputy assistant secretary of defense for counternarcotics and global threats. His new post is his fourth job in the Trump administration.

Mr. Cohen-Watnick grew up in the Washington suburb of Chevy Chase, Md., and attended the University of Pennsylvania.—Michael Crowley

Many Republicans admire Kashyap Patel as a loyal defender of Mr. Trump, but Democrats view him as a defiant political operative with little regard for protocol or expert opinion.

He is perhaps best known as a former aide to Mr. Nunes, the top Republican on the House Intelligence Committee, with whom he worked closely to discredit the Justice Department’s investigation into ties between the 2016 Trump campaign and Russia. Mr. Patel was the primary author of a politically charged 2018 memo, released by Mr. Nunes over the objections of the F.B.I. and intelligence officials, that accused federal officials of political bias against Mr. Trump.

During the impeachment proceedings against Mr. Trump, Fiona Hill, who served as the White House’s senior director for Eurasian and Russian affairs, told House investigators that she believed Mr. Patel had been taking on an improper role in Ukraine policy and was sending information to Mr. Trump.

The House Intelligence Committee later released phone records that included a 25-minute call between Mr. Patel and Mr. Trump’s personal lawyer Rudolph W. Giuliani, who had led a back-channel effort to pressure Ukraine’s government to dig up dirt on Mr. Trump’s Democratic opponent at the time, former Vice President Joseph R. Biden Jr. (Mr. Patel said the call was personal and denied communicating with Mr. Trump about Ukraine or supplying him with materials on the subject.)

Mr. Patel left the White House in February to become a senior adviser to Richard Grenell. then the acting director of national intelligence. After Mr. Grenell’s departure this spring, Mr. Patel became a deputy assistant to Mr. Trump and his top White House counterterrorism official.

A lawyer from Garden City, N.J., Mr. Patel was a public defender in the Miami area before joining the Justice Department in 2014, where he worked on counterterrorism cases before going to work for Mr. Nunes in 2017.—Michael Crowley

Michael Ellis is acknowledged, by conservatives and moderates, to be a smart, young lawyer. Yet his quick rise from the House Intelligence Committee to the legal staff of the National Security Council and then to senior intelligence posts has puzzled many of the same people.

After serving as senior director for intelligence at the National Security Council, Mr. Ellis was appointed this week to be general counsel of the National Security Agency, one of the most influential legal posts in the intelligence community. Mr. Ellis was chosen after the White House put pressure on the Pentagon. Because it is a Civil Service position, Mr. Ellis would continue in the job into the next administration.

Although the Biden White House could order his removal, he would be difficult to fire, and would have to be given another legal job in the Defense Department.

Before Mr. Trump took office, Mr. Ellis, a graduate of Dartmouth College and Yale Law School, was the general counsel for what was then the Republican majority on the House Intelligence Committee. There, he helped lead investigations by Mr. Nunes and won his confidence.

Mr. Ellis moved to the White House early in Mr. Trump’s term, and was one of the officials, along with Mr. Cohen-Watnick, who provided Mr. Nunes with intelligence reports that associates of Mr. Trump were swept up in foreign surveillance by American intelligence agencies. The material is at the heart of Mr. Trump’s frequent accusation that the Obama administration spied on his campaign.

Mr. Ellis also officially reviewed the memoir of the former national security adviser John R. Bolton, “The Room Where it Happened,” and said it included classified material. The review came after a career official determined Mr. Bolton had removed classified information from his manuscript. The career official told a federal court that the intervention to have Mr. Ellis review the book again was improper.—Julian E. Barnes