Amazon warehouse workers in Alabama voted against unionizing in the most closely watched U.S. union election in decades — a win for the online retail giant and a stinging setback for organized labor.

In a preliminary Friday morning tally released by the National Labor Relations Board (NLRB), more than half of the ballots cast were against unionizing. The full count will not be completed until later Friday.

RWDSU President Stuart Appelbaum said the union would seek to have the results of the election set aside. The union accused Amazon of committing “unfair labor practices” and interfering with the vote. Those claims could prompt a lengthy legal fight at the labor board and delay the results from being certified.

“We won’t let Amazon’s lies, deception and illegal activities go unchallenged,” Appelbaum said in a statement. “Amazon knew full well that unless they did everything they possibly could, even illegal activity, their workers would have continued supporting the union.”

Despite the results, Appelbaum said, “This campaign has proven that the best way for working people to protect themselves and their families is to join together in a union.”

Although Amazon must bargain with unions in some other countries, the company’s U.S. warehouses remain union-free. The seven-week mail-in election was the largest union threat to date in Amazon’s home country, with nearly 6,000 workers eligible to cast ballots. More than 3,200 ultimately did, and both the union and the company ran aggressive get-out-the-vote campaigns.

The union has accused Amazon of stepping over legal lines, particularly regarding a mailbox placed on warehouse property when the election began in early February. The labor board had rejected Amazon’s request for drop boxes onsite, but Amazon asked the U.S. Postal Service to place a mailbox on its campus, according to emails obtained by the union through a public records request and published by The Washington Post. The union has called the mailbox an attempt by Amazon to exert control over the election.

If the union fights the results, there would be a hearing to investigate the union’s claims against Amazon. NLRB officials could potentially set aside the results and order a new election if they find Amazon’s behavior to be as egregious as the RWDSU has portrayed it. A lengthy dispute could eventually go before the NLRB’s board in Washington, which President Joe Biden could reshape in Democrats’ favor as early as August. 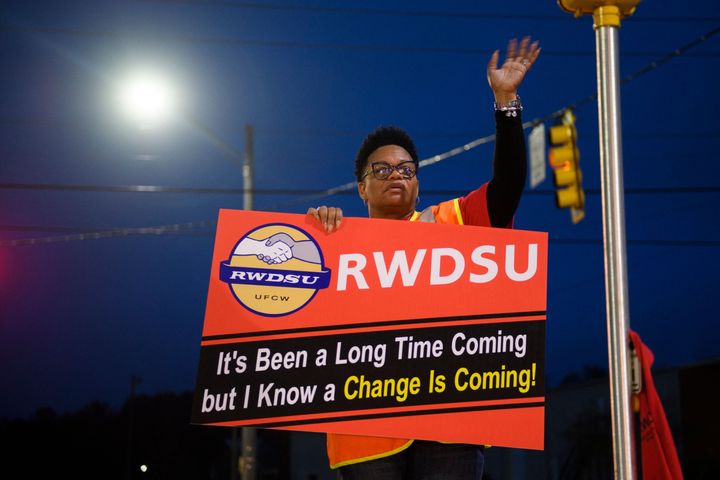 The union election in the Birmingham suburb of Bessemer drew the type of outside interest that is more commonly associated with a crucial political election. Progressive lawmakers such as Sen. Bernie Sanders (I-Vt.) visited the area to show their solidarity with the pro-union workers. Other high-profile Democrats lambasted Amazon for its anti-union tactics, while famous athletes and celebrities voiced their support for unionization. Even Biden weighed in with a speech condemning union-busting efforts by employers, a clear reference to Amazon.

That support was not enough to tip the scales in the union’s favor. Many labor experts said Amazon’s aggressive tactics showed a need to overhaul labor law and level the playing field between employers and unions during elections. While Amazon held regular onsite meetings to discourage unionizing, the union was making its case to workers largely through phone outreach amid the pandemic.

As Amazon continues to grow and reshape different industries, it’s become more imperative for unions to gain some kind of toehold inside the company. Amazon’s workforce has swelled to nearly a million in the U.S., influencing not just the retail space but logistics and web services as well.

Bessemer workers approached the RWDSU last summer, shortly after the warehouse first opened. They had grievances about Amazon’s productivity requirements and work monitoring, as well as the typical pay of $15 per hour, which they said did not match the workload. The union said it ultimately gathered more than 3,000 signed union cards to prompt the election.

Amazon argued that it already offered sufficient pay and benefits. The company told workers they would be paying dues — even though Alabama is a right-to-work state and dues are optional — and might not see any improvements if they voted for the union.

Research has shown that anti-union campaigns like the one run by Amazon can significantly aid efforts to beat back organizing. Initial Labor Department filings show that Amazon was paying more than $3,000 per day for each consultant under contract, though future filings will give a broader idea of how much Amazon spent to combat the union drive.

The preliminary tally in Amazon’s favor does not mean the company’s labor troubles are behind it. The election brought unprecedented scrutiny of Amazon’s labor practices in both the media and Congress, with one pro-union worker even testifying before a Senate committee.

The publicity of the union drive helped galvanize organizing at other Amazon facilities as well. The union says it has gathered more than 1,000 union cards from other Amazon sites, which could lead to more unionization efforts elsewhere.