UK crashes into deepest recession of any major economy

London (CNN Business)The world’s top developed economies are all officially in a recession. What happens next is far from certain.

On Friday, Canada joined France, Germany, Italy, Japan, the United Kingdom and the United States in reporting that its economy shrank dramatically in the first half of 2020 due to the pandemic. Canadian economic output shrank by 11.5% between April and June, the sharpest decline in records dating back to 1961.
Now, six months after the coronavirus outbreak began to accelerate rapidly outside China, it’s increasingly clear that countries will not bounce back in tandem. The impact of the virus, public health policy and stimulus measures are creating divergent paths forward, with ramifications that could last years.

“It’s the path of the virus and the vaccine that’s critical to the recovery story,” said James Knightley, ING’s chief international economist.

While Covid-19 delivered a brutal hit to every country’s economy, the magnitude of the shock has varied significantly across the globe.
The United Kingdom has fared the worst of any of its big global peers, with its economy shrinking by more than a fifth between April and June.
Ben May, director of global macro research at Oxford Economics, attributes this weakness in part to statistical factors, including how the government accounts for inflation. But he also pointed to the importance of consumer spending to the British economy, which magnifies the effects of social distancing, as well as the UK government’s initial reluctance to impose strict quarantine measures.
“The UK government has been criticized for taking too long to lock down the economy and effectively allowing the pandemic to gain a stronger foothold in the country,” May said in a recent note to clients.
Even countries that locked down sooner than the United Kingdom have suffered dramatic economic slowdowns, with the number of coronavirus cases and government decisions on when to reopen offices and restaurants dictating the scale of damage.
While all G7 countries suffered their worst drop in GDP on record, France appears to have been knocked harder than Germany in part because of the extremely harsh quarantine it adopted in April, according to Berenberg Bank economist Florian Hense. And while Italy emerged as an epicenter of infections in March, its decision to impose restrictions on movement early may have set it up for a second quarter that was slightly less severe than feared.
Some parts of the US economy started reopening in May, which meant the decline was not as sharp as was first forecast. But this may just lead to a weaker July-to-September quarter, especially given that a spike in cases in Sun Belt states in June forced some local officials to reimpose restrictions late that month.
The Back-to-Normal Index from Moody’s Analytics and CNN Business shows that the US economy is operating at 78% of where it was in early March.

The clear outlier among major economies is China, which catapulted into recovery mode in the second quarter following a drop in GDP between January and March, its worst performance over a three-month period in decades.
As the initial hub of the outbreak and the first in the world to impose draconian measures to try to control the spread of the virus, China was the first major economy to reopen. That’s given it a head start.
Where these countries go from here depends in large part on the virus and the race for a vaccine, Knightley said, with some economists warning of the potential for a double-dip recession in which output falls again.
They also caution that while a big rebound is expected in the third quarter, that may not dictate the long-term trajectory, despite huge injections of cash from central banks and massive increases in government spending.
A rapid increase in serious cases could prompt governments to reintroduce strict lockdown measures. That would slam consumer confidence for a second time, reduce spending and investment and throw the recovery off track. 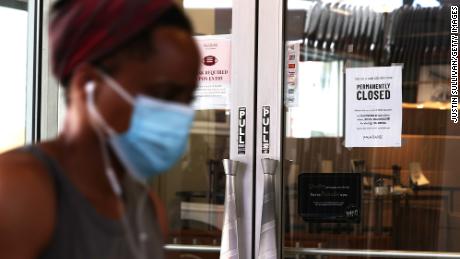 Government relief efforts also have a vital role in determining where economies go next. In the United States, Democrats and Republicans still can’t agree on a fourth stimulus package. Though President Donald Trump took executive action to enhance jobless benefits in the absence of a deal, adding $300 per week to state unemployment checks, the lack of more comprehensive measures is a risk, according to Knightley.
The additional $600 per week that jobless Americans received until July served as a big boost to consumer spending. Even as unemployment skyrocketed, personal income in the United States rose 10.5% in April as the government provided extra support and cut $1,200 checks.
Strategists at Goldman Sachs estimate that the lapse in the $600 benefit will result in a $70 billion decline in personal income in August, hitting both consumer spending and retail sales. With consumer services driving roughly 70% of the US economy, that could create problems.
Germany, meanwhile, recently extended the length of its program that keeps workers on corporate payrolls by subsiding their wages through 2021.

Oxford Economics’ May said another crucial factor could be public faith in the government response. If people don’t trust government leaders to make decisions in their interest, it could keep a lid on spending, he said.
A Pew Research Center survey of 14 advanced economies released this week found that a majority of Americans and Brits did not think their country had done a good job dealing with Covid-19.
Source: Read Full Article