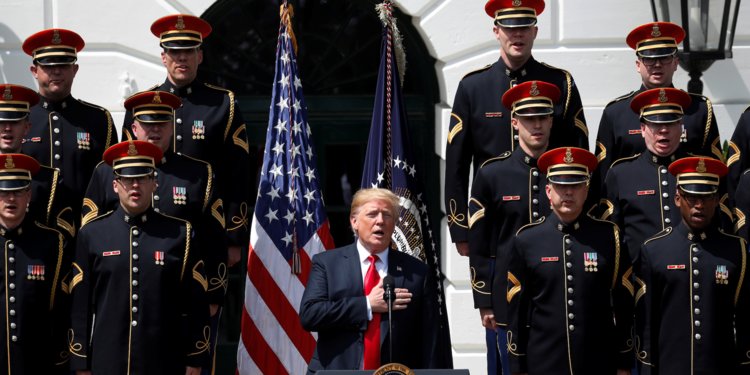 The military parade President Donald Trump proposed is set to be held on November 10.
Kevin Lamarque/Reuters


The military parade proposed by President Donald Trump, which is set to be held on November 10, will cost $12 million, US officials told CNN.

The parade, which will coincide with the 100th anniversary of the end of World War I, will include wheeled vehicles but no tanks to avoid damaging infrastructure, according a Pentagon memo from March. Some troops will wear period uniforms and aircraft will also be involved toward the end.

The memo said the parade route will be from the White House to the Capitol. Trump seized on the military parade idea after taking office, an idea that many in the Pentagon have resisted because the US has a tradition of only holding grand parades after military victories like World War II and Desert Storm. Furthermore, many of the troops and vehicles to be showcased would need to be moved into the national capital from their bases at taxpayer expense.

The parade’s estimated cost is roughly equivalent to the cost of a canceled military exercise with South Korea, known as Freedom Guardian, which Trump claimed was “tremendously expensive.”

The Trump administration moved to cancel the exercise after a summit between Trump and North Korean leader Kim Jong Un in June.

North Korea has frequently complained about large-scale military exercises held by the US and South Korea on the Korean Peninsula, characterizing them as rehearsals for an invasion. But the Pentagon has long maintained such exercises are needed to ensure military readiness to operate together in the event of North Korean aggression. North Korea has shelled South Korean islands and is even accused of sinking a South Korean submarine and killing 46 crewmembers.

After the meeting with Kim, in which the two leaders discussed the denuclearization of North Korea, Trump tweeted, “We save a fortune by not doing war games, as long as we are negotiating in good faith – which both sides are!”

In a separate tweet on the same topic, Trump said, “Holding back the ‘war games’ during the negotiations was my request because they are VERY EXPENSIVE and set a bad light during a good faith negotiation. Also, quite provocative. Can start up immediately if talks break down, which I hope will not happen!”

The president’s assertion the military exercises near the Korean Peninsula were “provocative” contradicts past statements from the Pentagon.

“Our combined exercises are defense-oriented and there is no reason for North Korea to view them as a provocation,” Marine Lt. Col. Christopher Logan, a Pentagon spokesman, said in a statement on one such exericise back in March 2018. “While we will not discuss specifics, the defensive nature of these combined exercises has been clear for many decades and has not changed.”

The president’s decision to suspend military exercises with South Korea was controversial and seen by critics as too great of a concession to North Korea, especially given the agreement they signed in June regarding denuclearization was vaguely worded.

North Korea has already failed to deliver on certain promises outlined in the agreement and North Korea recently accused Secretary of State Mike Pompeo of making “gangster-like” demands during a visit earlier this month.

In short, a lot remains up in the air regarding the denuclearization process in North Korea and it’s unclear whether Pyongyang will try honor the agreement or just bide its time while continuing to develop weapons, as some officials and monitoring groups have reported.