London (CNN Business)Europe’s scramble to find alternatives to Russia’s natural gas is pushing the world to the brink of a winter energy shortage, with the worst effects likely to be felt in poorer economies in Asia.

Since Russia invaded Ukraine, the European Union has tried to reduce its reliance on Moscow for energy. EU countries have been racing to buy more liquefied natural gas (LNG), an attractive alternative to Russian gas because it can be shipped on tankers, rather than delivered via pipelines. It’s also a cleaner fuel than coal or oil.
But if the bloc manages to “sharply reduce” its reliance on Russian gas — it’s planning to slash its consumption by two-thirds by the end of this year — global demand for LNG will outstrip supply by 26 million tons by the end of 2022, according to a recent analysis by consultancy Rystad Energy.

That equates to nearly 7% of global LNG demand last year, or about 25 days’ worth of supply.

“By shunning Russian gas, Europe has destabilized the entire global LNG market that began the year with a precarious balance after a tumultuous 2021,” the report said.

Europe has snapped up supplies of LNG at breakneck speed in recent months.

The region, including the United Kingdom, imported 28.2 million tons between February and April, according to data from the Independent Commodity Intelligence Services — that’s up 29% from the same period last year. France and Spain were the biggest buyers.
Kaushal Ramesh, senior analyst for gas and LNG at Rystad Energy, told CNN Business that an impending shortage became apparent in March when “the EU announced that they were going to ramp up LNG imports by 50 bcm [billion cubic meters] versus 2021.”
“The stage is set for a sustained supply deficit, high prices, extreme volatility, bullish markets and heightened LNG geopolitics,” Ramesh said in the report.
On Thursday, spot prices for LNG in East Asia were up 114% from the same day last year at $22 per metric million British thermal units (mmbtu), according to ICIS data. Global trade in LNG grew 6% in 2021, driven by a strong post-pandemic rebound in demand from Asia, data from the International Energy Agency shows. 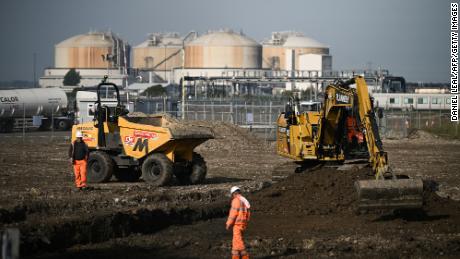 Buyers could be hit with further price hikes as European demand soars.
LNG prices are tightly linked to prices for Europe’s natural gas delivered by pipelines. Benchmark prices for European gas futures are currently hovering close to $30 mmbtu — down from a record $67 in March — but could shoot up past $100 mmbtu if Russia were to suddenly cut off its gas deliveries entirely, as it has already done to Poland, Bulgaria and Finland.

Asia has been the biggest importer of LNG since at least 2010, Ruth Liao, editor for LNG Americas, told CNN Business. But some buyers in the region will find it hard to compete with richer economies in Europe and could be priced out of the market, whether or not Russia abruptly turns off the taps.
“Next winter remains a major risk in terms of how LNG supply can balance competing demand between Europe and Asia,” she said.
Rystad’s Ramesh said countries such as India, Pakistan and Bangladesh are most likely to take the hit as LNG is diverted to Europe. Buyers should start signing long-term supply agreements, Eric Heymann, a senior economist at Deutsche Bank, told CNN Business.
“A larger share of LNG demand and supply… is based on short term or flexible contracts or on the spot market,” he said. “The price will decide where the LNG goes,” he said.
Since November, India and Pakistan have already scaled back LNG imports by 15%, according to data from analysis firm Vortexa, a trend driven mostly by rising prices. As a result, demand in Asia could be “permanently dented,” with some countries having to increase their use of coal and oil, Rystad Energy predicts.
Others could step up their transition to renewable energy. LNG is widely viewed at one of the cleanest fossil fuels, and a key component of the energy transition. But the evidence is mixed. Some studies have found LNG produces significantly less greenhouse gas emissions over its lifecycle, while others have detected high rates of methane leakage — the main component of LNG — at various points during its production.
Methane contributes up to 34 times more to global warming over a 100-year period than carbon dioxide, according to the United Nations.

Higher prices are a boon for major LNG exporters, including the United States, Qatar and Australia.
Europe has imported about 45% of its LNG from the United States over the past two months, according to Vortexa. Qatar has supplied the bloc a little over one fifth.
“More controversially, 13.5% of European LNG still comes from Russia’s arctic LNG project,” Felix Booth, head of LNG at Vortexa, told CNN Business.
A flurry of new or revived LNG projects are attempting to capitalize on Europe’s urgent need for the energy source, including in Germany, which still gets 35% of its imported gas from Russia.
Europe’s biggest economy has announced plans to build two LNG-receiving terminals and RWE (RWEOY), one of its major energy companies, is poised to sign a 15-year supply deal with US LNG producer Sempra.

But producers aren’t able to move fast enough to prevent a global shortage this winter.
“Although soaring demand has spurred the greatest rush of new LNG projects worldwide in more than a decade, construction timelines mean material relief is unlikely only after 2024,” Rystad Energy said.
Source: Read Full Article