Theme park executives from Disneyland, Universal Studios Hollywood, Legoland and the company that operates Knott’s Berry Farm came together on Wednesday to decry what they see as an edict handed down by the State of California and Governor Gavin Newsom on Tuesday. Officials say the state guidelines make it nearly impossible for them to reopen. Some hinted at legal action.

When asked about legal recourse Erin Guerrero, Executive Director of the California Attractions and Parks Association said, “I think that all options are open at this point. Our number one goal is to reopen responsibly.”

Deadline Now: Disneyland, Other Parks Face Off With State Of California Over Coronavirus Reopening Rules

Disneyland Resort President Ken Potrock said the teams of state officials who visited parks in Orange County and Florida seemed “incredibly through.” Each of the visits was “multi-hour” to provide insight into not just how guests were acting, but to see how employees reacted to, say, a guest whose mask was not over their nose.

“They took detailed notes. They even had a meting with us afterward,” said Potrock.

“We come away going, ‘This is great, they came and I think learned some things.’” Potrock noted state officials also “had a couple suggestions.”

“Post those visits,” recalled Karen Irwin, President & COO of Universal Studios Hollywood, “we were told there would be reports in a week or so that would provide us practical steps toward reopening.”

But, say execs, that’s not what happened.

A number of days later, according to Potrock, “it was: ‘We’re announcing this [very restrictive] Tier 4 enforcement.’”

California’s director of Health and Human Services Dr. Mark Ghaly said on Tuesday that smaller theme parks can resume operations in the state’s Orange Tier. Capacity will be limited to 25% or 500 visitors, whichever is fewer. Only outdoor attractions may reopen and only to guests who are residents of the same county. 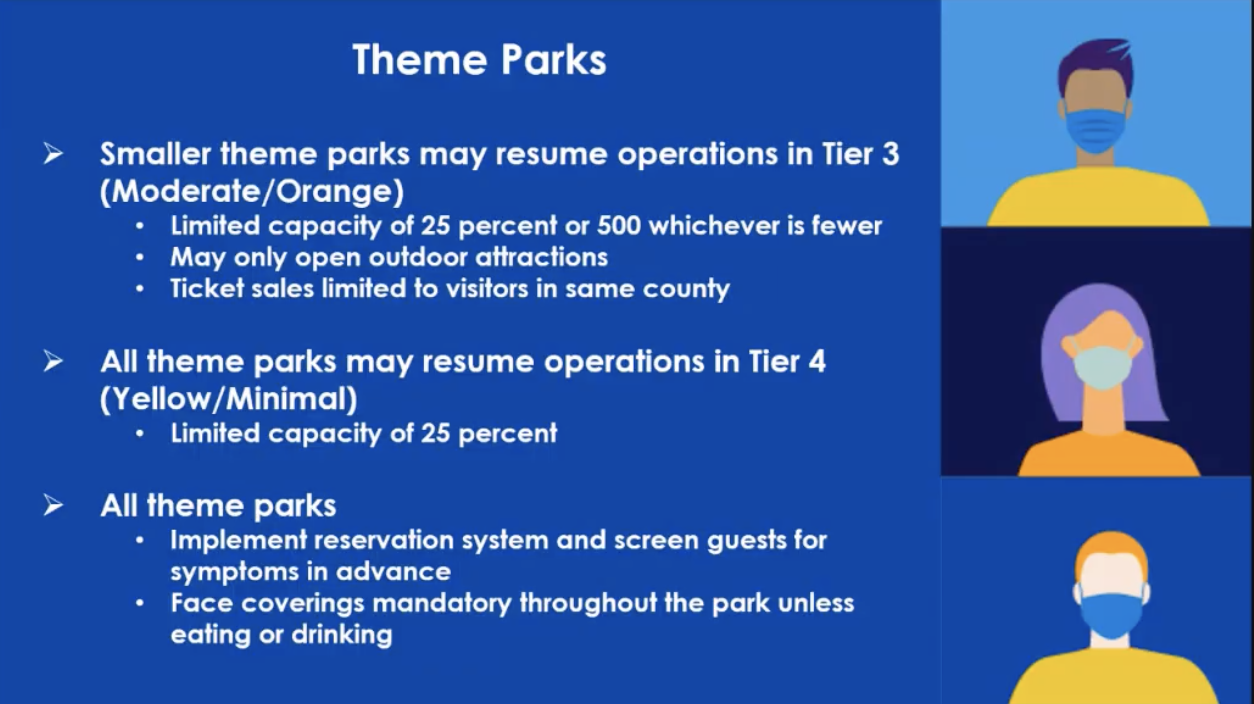 All theme parks — including Disneyland in Anaheim and Universal Studios Hollywood — may resume operations in Tier 4, Yellow, which is much further down the road. At that point, the guest limit is 25% across the board and indoor dining establishments can only operate at 25% capacity.

Orange County, where Disneyland and Knott’s Berry Farm are, is currently in the Red Tier. Los Angeles, home to Universal Studios, is in the most restrictive tier, Purple.

Park officials were blindsided by the announcement, as evidenced by their strongly-worded reactions to the state announcement.

“We’re not getting a solution-oriented discussion,” Potrock continued on Wednesday. “We’re getting: Here’s the rules and you have to live with it.”

“It’s disingenuous for the government to say this is collaboration,” alleged Irwin. She says the promised state reports were never released.

California Director of Health and Human Services Dr. Mark Ghaly said on Tuesday that state officials looked at things like “how lines were managed” when they visited the parks. But, he said, “the level of mixing even without masks” that state observers saw was of concern.

Park operators have their own concerns, one of which is that the region would not be able to reach the Yellow Tier anytime in the near future.

“Frankly I just don’t see a path forward to getting to tier 4. Getting to the levels that are set for tier 4 seems impossible,” said Irwin on Wednesday.

“I think for a large county like us, especially a county with institutions of higher education where folks [are] coming in from outside the county and outside the state, I think it’s going to be very hard to achieve the yellow tier,” said Orange County’s Health Officer, Dr. Clayton Chau on Tuesday.

“It depends on when the vaccine will come as well as how many doses [are] available for our populations as well as how many of our residents will readily accept the vaccine – those are the three factors that will determine how soon we can get to the yellow tier,” speculated Chau. “Personally, I think that we can look forward to a yellow tier by next summer, hopefully. Hopefully.”

Kurt Stocks, President, Legoland California Resort said he felt the “guidance from the governor is grossly inconsistent.” Noted Stocks, “zoos, museums and aquariums and family entertainment centers have all been allowed to reopen without any distinction as to their size.”

“The bottom line of what we’re looking for is equal treatment,” said Kaprelyan. “And that’s not what we’re getting.”

In terms of remediation, Kaprelyan agreed that legal action was now a consideration for theme parks. “All options are open for us,” he said.