The US Air Force will call its first UK-based F-35 Lightning II fighter squadron the Valkyries.

The 495th Fighter Squadron, part of the 48th Fighter Wing at RAF Lakenheath, will take on the title, according to a release.

The service announced the nickname for its first overseas Joint Strike Fighter squadron Monday; the name beat other crowdsourced choices, including Archangels, Sabres, Sentinels and Swordsmen, the release states.

“‘Valkyries’ epitomizes the force’s move toward more inclusivity and equally represents the fifth-generation stealth fighter’s air superiority,” said Lt. Col. Ian McLaughlin, the incoming 495th commander, in the release. The base currently has the US Air Forces in Europe’s only F-15 fighter wing, which flies both Eagle and Strike Eagle models.

The Valkyries name pays homage to the female warriors of Norse mythology who are the “choosers of the slain,” deciding who lives or dies in battle.

“Like the Valkyries themselves, we’ll be vital to determining the fate of our adversaries in the battlespace,” McLaughlin said. 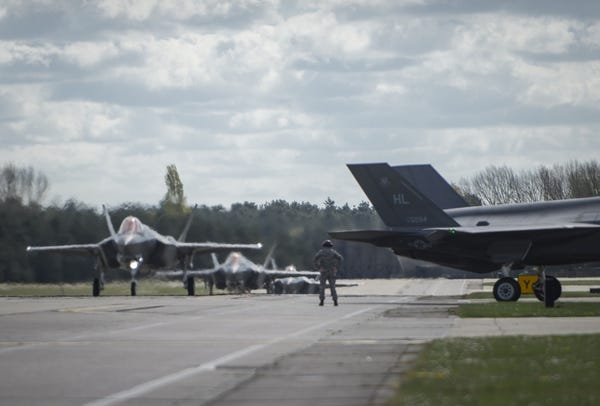 The mythological Valkyries also serve the Norse god Odin. The Air Force already has connections to Odin, as does its F-35: Last year, the service announced it was transitioning from the JSF’s Autonomic Logistics Information System, or ALIS, to a cloud-based solution by 2022. The information-gathering system, known as the Operational Data Integrated Network, or ODIN, tracks data for the F-35’s maintainers, including software updates and supply chain management.

The service eventually plans to house two squadrons worth of F-35A conventional takeoff and landing stealth fighters at Lakenheath, bringing in an additional 1,200 service members and roughly 54 aircraft assigned to the base’s 48th Fighter Wing.

In December, Military.com visited the base, where construction is underway on two hangars and a six-bay simulator, as well as other infrastructure for training and maintenance on the stealth fighter.

“The US is going to have about 50 jets here,” said Lt. Col. Derek “Ajax” Syswerda, director of staff for the 48th Fighter Wing, in an interview. He explained that bringing the F-35 to the continent will amplify the work done with joint partners in the region.

“We have a bunch of different partners; that’s changing all the time,” he said. “And the theater is going to have something like 500 [F-35] jets in it. So if we can’t operate with those countries, we can’t as effectively go to war.”

The first Lightning II jet is expected to arrive this fall, making Lakenheath the first permanent US F-35 base in Europe. The jet first deployed to the base in 2017.