Tesla jumps 7% after record-breaking deliveries in the 1st quarter 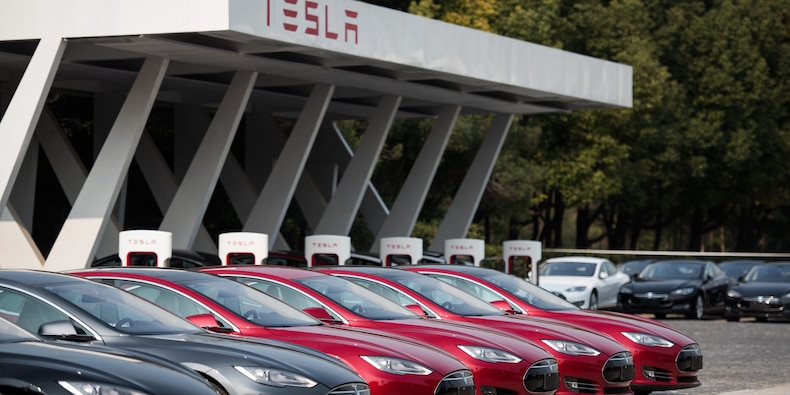 The company last week revealed that 184,800 vehicles were delivered and 180,338 cars were produced for the first three months of 2021, despite major production and supply-chain headwinds. Tesla in the final quarter of last year delivered 180,570 cars.

The carmaker sold 182,780 of its Model 3 and Model Y, along with 2,020 of its higher-end Model S and Model X. Tesla does not break down its sales by individual model.

Wedbush analyst Daniel Ives upgraded Tesla to "outperform" and raised its target price to $1,000 from $950 in a note on Sunday. Ives said the first-quarter results were a "paradigm changer" and show that the global pent-up demand for Tesla's Model 3/Y is just about to hit its next stage of growth.

Ives on Friday said also said that he believes Tesla could exceed 850,000 deliveries for the year – even 900,000 as a stretch goal – despite a chip shortage and various supply chain issues lingering across the auto sector, especially with President Joe Biden signaling a commitment to green infrastructure.

Earlier this year, Tesla CFO Zach Kirkhorn warned investors of the possible roadblocks for the quarter.

"Specifically for Q1, our volumes will have the benefit of early Model Y ramp in Shanghai," Kirkhorn said on a conference call. "However, S and X production will be low due to the transition to the newly architected products. Additionally, we're working extremely hard to manage through the global semiconductor shortage as well as port capacity, which may have a temporary impact."

The strong start of the year for the company proved that founder Elon Musk's efforts to shore up global operations in Europe and China are paying off.

"We believe China and Europe were particularly robust this quarter," Ives in a note said. "With 3% of auto sales [electric vehicle] today globally and on a trajectory to be 10% by 2025, we believe the EV market is just starting to play out as the auto sector is transformed green over the coming years with Tesla leading the charge."