Home » Business » Some said the video promoted the practice of secretly filming women.

Some said the video promoted the practice of secretly filming women.

“We sincerely apologize to everyone who may have felt uncomfortable due to the milk advertisement video uploaded to the official YouTube channel of Seoul Milk on the 29th of last month,” Seoul Milk’s parent company Seoul Dairy Cooperative said in a statement on its official website on December 8.
The advert provoked a public backlash, and sparked a debate about sexism in the country. Some social media users also said it justified secretly taking video footage of women ‚— a crime known as ‘molka’ that has become a widespread problem in South Korea in recent years.

The male voice continues, “we decided to approach them cautiously, who’re drinking clean water from clean nature, eating organic diet, and living peacefully in a pleasant environment.”
As the man gets closer to the people, he accidentally steps on a twig and disturbs the group, who transform into cows.
When the advert was posted, social media users took to YouTube, leaving comments including “It makes me sick,” or “This is too much,” according to CNN’s affiliate JTBC.
Seoul Milk insisted that there were men in the video as well, but they were not recognizable, JTBC reported. 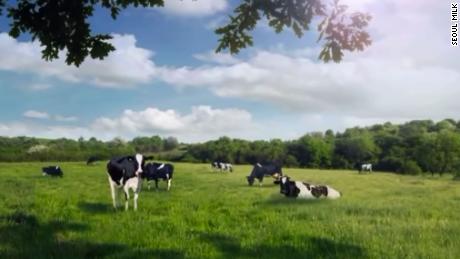 At first, Seoul Milk said the advert had been received differently to how it had been intended, adding that the company wanted to focus on the organic origins of their product. The company insisted that they did not intend to depict women as cows, as some internet users had suggested.

However, the company later deleted the video so as not to further cause discomfort, JTBC reported.
“We are taking this matter seriously, and we will pay more attention and review to prevent similar problems in the future,” the company said in its apology.
Source: Read Full Article