Attorneys representing the attorney Sidney Powell filed a motion Monday to dismiss a $1.3 billion defamation lawsuit from Dominion Voting Systems, arguing her conspiracy theories about the election-technology company having ties to Venezuela and secretly rigging the 2020 presidential election should not have been taken literally.

“Even [assuming] that each of the statements alleged in the Complaint could be proved true or false, no reasonable person would conclude that the statements were truly statements of fact,” Powell’s attorneys wrote in the filing.

Dominion filed its lawsuit against Powell in January, alleging the lawyer defamed the company when she falsely claimed the company secretly switched votes from then-President Donald Trump to now-President Joe Biden.

She was hired and then fired by Trump’s legal team before filing four lawsuits on her own seeking to overturn the election results. Her lawsuits, filled with spelling mistakes and bizarre claims, all failed in court.

Attorneys Lawrence J. Joseph, Howard Kleinhendler, and Jesse R. Binnall filed their response to Dominion’s lawsuit on behalf of Powell and Defending the Republic, a fundraising vehicle she set up while promoting her failed lawsuits.

They argued Powell’s statements should be taken in the context of the highly charged election, even though Trump had already lost the election at that point, and that any “reasonable person” would understand she wasn’t making factual claims, even though she had made her claims in lawsuits in addition to media appearances.

“Notably, one of the focal points of the Complaint is the press conference held by Sidney Powell and others on November 19, 2020 at the Republican National Committee headquarters in Washington, D.C.,” the attorneys wrote. “Obviously, any press conference originating from the Republican National Committee is political to its core.” 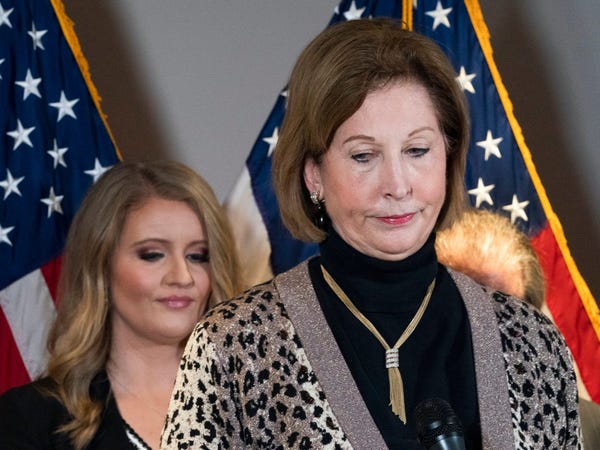 Powell’s attorneys say the fact that Dominion refers to Powell’s claims as outlandish indicates they should have never been taken seriously in the first place.

“Indeed, Plaintiffs themselves characterize the statements at issue as ‘wild accusations’ and ‘outlandish claims.’ They are repeatedly labelled ‘inherently improbable’ and even impossible,'” Powell’s attorneys wrote. “Such characterizations of the allegedly defamatory statements further support Defendants’ position that reasonable people would not accept such statements as fact but view them only as claims that await testing by the courts through the adversary process.”

Powell doubled down on her conspiracy theories more than a month after the election results were settled. After Dominion sent her document retention letters warning of a lawsuit, she called the company “fraud masters” on Twitter.

Powell has steadfastly refused to retract her claims about the company and has not responded to Insider’s repeated requests for comment.

The new filing does not address many of the points in Dominion’s original lawsuit, including that Powell submitted modified documentation about the company’s certificate to provide election technology in Georgia. Legal ethics experts told Insider Powell could face sanctions if she’s found to have modified court exhibits.

A litany of legal challenges await Powell after her failed election lawsuits. In addition to the defamation lawsuits from Dominion and Smartmatic, officials in Michigan are seeking to disbar her and the attorneys who worked with her.