New York (CNN Business)St. Patrick’s Day is several weeks away, but McDonald’s is already getting ready with the arrival of the Shamrock Shake.

Beginning February 15, the fan-favorite milkshake as well as an Oreo Shamrock McFlurry will go on sale at US restaurants for a limited time. These temporary offerings, which include not only holiday items but also specials such as the McRib and celebrity meals, help McDonald’s create buzz and boost sales. 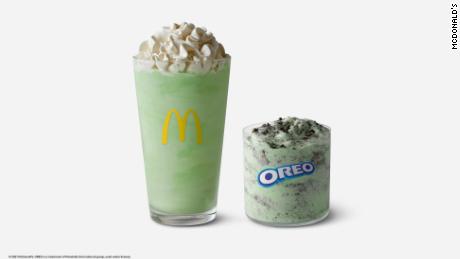 McDonald’s first started selling the Shamrock Shake in 1970. Over the years, the burger chain has brought back the original as well as variations like the “Shamrock Sundae” in 1980, a chocolate version in 2017 and the Oreo Shamrock McFlurry in 2020. The Shamrock Shake first went on sale nationally in 2012.

Fast food chains are constantly competing for customers’ dollars and attention, and specialty offerings are a way to try to cut through the noise.
McDonald’s (MCD)has unveiled lots of items in this category in recent months, including spicy chicken nuggets and celebrity meal deals with singers J. Balvin and Travis Scott. The offerings create “menu excitement that keeps customers engaged,” CEO Chris Kempczinski said on McDonald’s most recent earnings call. Sales at US restaurants open at least a year rose 5.5% in the fourth quarter compared to the year prior.

The Shamrock Shake is part of a big month for McDonald’s, which is expected to roll out three new chicken sandwiches on February 24.
Source: Read Full Article