Home » SCOTT GALLOWAY: There are 3 dangerous threats facing our nation right now, and the pandemic has made them all worse

SCOTT GALLOWAY: There are 3 dangerous threats facing our nation right now, and the pandemic has made them all worse

In February 1946, President Truman directed his intelligence apparatus to prepare a daily summary of critical national security issues. The President’s Daily Brief (“PDB”) has been produced ever since, and those that have been made public illustrate the breadth and complexity of the threats facing our nation.

For example, in 1962, while President Kennedy dealt with the risk of Soviet nuclear weapons being stationed 200 miles off Miami, his PDB also alerted him to chaos in the Saudi and Congolese governments, Khrushchev’s plans for a “major reorganization” in the USSR, worsening tensions between Laos and North Vietnam, and a destabilizing student protest in South Korea.

The US has survived for 250 years in part because its leaders have worried about, fortified against, and repelled a wide range of emerging threats. Many threats are obvious and popularly understood; however, many others are self-inflicted, uncomfortable to acknowledge, or come hidden under the guise of opportunity. These threats can register the greatest damage, as fewer defensive measures have been taken against them. In sum, it’s productive to worry about things that others (e.g., the media, colleagues) do not.

Below are the threats that I believe to be most present and not clear.

Young men are less likely than young women to graduate from high school (45,000 fewer US boys than girls do so every year) and college, they are twice as likely to overdose, and three times more likely to be arrested. Men die from suicide at a far greater rate than do women — and these disparities are increasing. 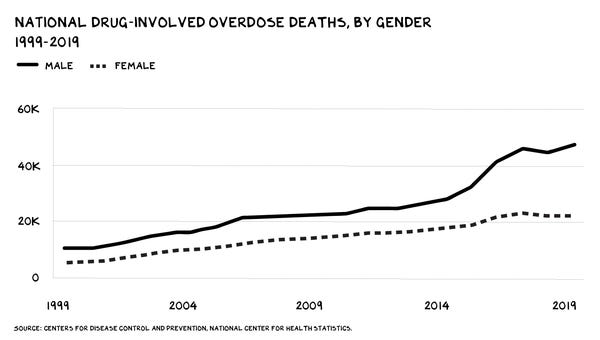 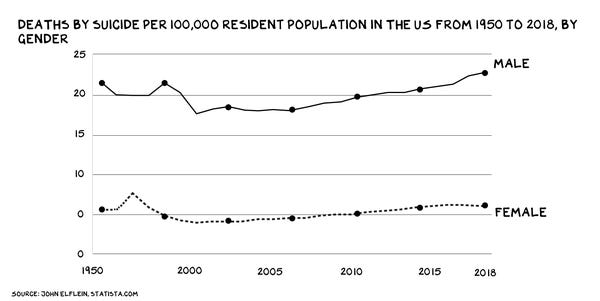 It is increasingly difficult for young people to become a viable, consistent provider. Real wage growth has been sluggish for decades, and the boom in asset prices makes it harder to buy a house or build wealth.

Self-perception of success/failure is a function of relativity and proximity. Twenty-somethings today spend three hours a day on social networking apps, and, for the first time in history, a majority of them live with their parents. Young people do not benchmark themselves against peers from other eras or geographies, but against their Instagram feeds and roommates (i.e., parents). These examples set unattainable standards and remind them of their shortcomings, respectively.

Worsening economic prospects affect men and women, but not equally. Despite generations of effort and real improvement in gender equality, men are still expected to be providers and are told from an early age that financial success is a critical measure of manhood. 71% of American women say it is very important for a man to support his family financially. Only 25% of men say the same about women. 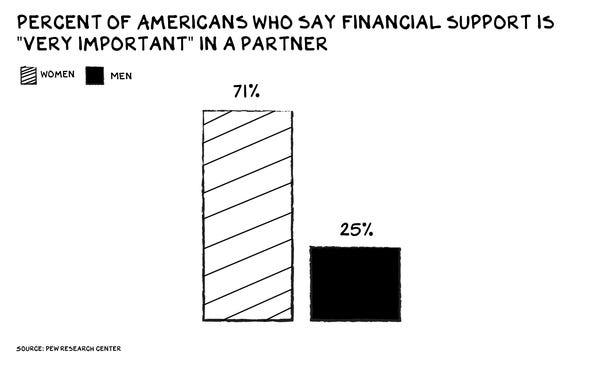 For better or worse, men who are perceived as unviable providers do especially poorly when seeking mates. Online dating apps are now the most popular way for people to meet, and they provide unprecedented data on mating preferences. Of course, for both men and women, a small group receives most of the attention. In fact, the inequality of attention is greater than the inequality of income. 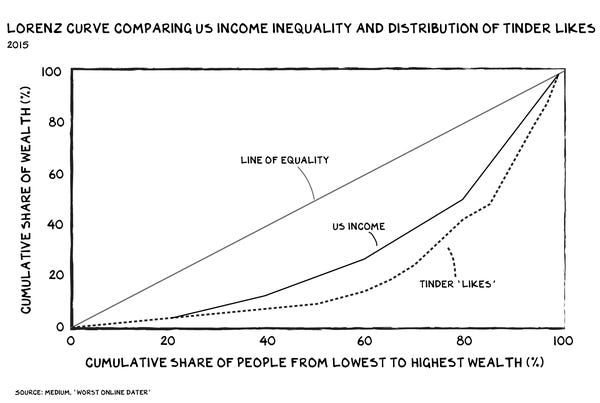 But, the concentration is far greater for men. On Hinge, the top 10% of men receive nearly 60% of the “likes” — the comparable figure for women is 45%. If Hinge constituted a sovereign, it would reflect an average wealth (measured in “likes”) for women, but for men, it would be the eighth most unequal country on Earth.

One outcome: a radical decline in sexual activity among young men. In 2018, 28% of men under 30 reported having no sex in the past year — double historical rates. 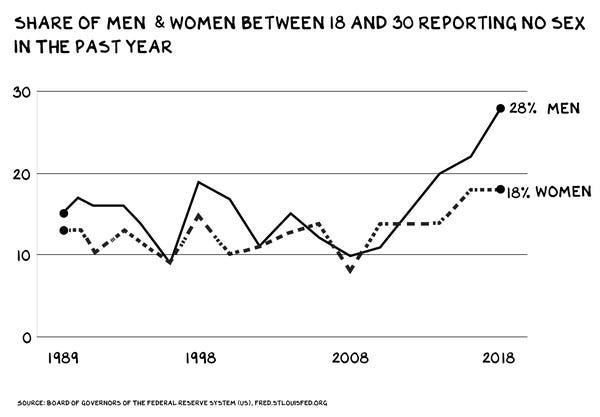 This isn’t about sex, but about a wider range of (non-)attachments (marriage rates hit an all-time low in 2018 as well). As a species, we need physical and social contact, and we crave deep, meaningful bonds. Men who fail to attach to partners, careers, or communities grow bitter, and seek volatility and unrest. They are more susceptible to fringe theories, and over-index on online forums filled with misogynist content and misinformation.

Economic inequality and elasticity are correlated with violence and instability, and studies of gun violence in the US find a strong association with decreased social mobility. Marriage, on the other hand, correlates with reductions in crime, and may even have a causal effect on reducing it.

The reduction of economic pathways for young people is no less serious for women, but it appears to be less dangerous. When young women feel shame and rage, they don’t turn to AR-15s. The most dangerous person on the planet is a bored, broke, lonely young male. The US is producing too many of them. Unless we dramatically increase the economic opportunities for young people, we increase the volatility of our commonwealth and add accelerant to crises.

2. Crypto’s assault on the USD

The United States government plays a vital role in world security and economic prosperity. Large-scale criminal enterprises, extremist terror organizations, rogue nations such as North Korea, and authoritarian powers like China and Russia seek to undermine the American way of life. The bulwark to these threats is our nation’s ability to deploy unrivaled economic and military force in pursuit of US interests and defense of our citizens.

A pillar of this strength is the primacy of the United States Dollar. The dollar is the world’s default currency, preferred store of value, and medium of exchange. Because global investors are eager to hold dollars, we have tremendous latitude regarding our own liquidity and influence over organizations and sovereigns that trade in the dollar. Because global commerce is settled in dollars, US law enforcement maintains visibility into — and authority over — flows of capital and influence. The dollar is a ubiquitous countermeasure to adversaries that does not present the risk(s) of escalation of military force.

The dollar is already structurally challenged: It accounts for 59% of global foreign exchange reserves but only an estimated 16% of global GDP. That would be hard to sustain under any circumstances, but now, the US is accelerating its long-running debasement of the once “all-mighty dollar” in a misguided attempt to prop up the shareholder class during the pandemic.

As John Connally Jr., Richard Nixon’s treasury secretary, put it in 1971, “the dollar is our currency, but it is your [every other nation’s] problem.” Today, apparently infinite quantitative easing (printing money) is our problem … and it is bitcoin’s opportunity. Cryptocurrency, sitting at a $2T market capitalization, is no threat to the dollar today, but the trends are not favorable.

Should bitcoin and other cryptocurrencies usurp the scarcity credibility of major currencies and emerge as the dominant form of money, the dollar — and the role it plays in world stability — would be drastically undermined. Widespread use of currencies that evade the existing financial system could blind US authorities to tax fraud, sanctions evasion, and other criminal conduct. Indeed, it would degrade the ability of governments across all democracies to collect taxes and enforce financial laws. Less investor interest in the dollar would increase US government borrowing rates, and reduce discretionary spending as interest on debt increases.

Big tech has created enormous value. However, its net value (benefits minus externalities) is diminished as regulators and lawmakers lack the domain expertise to regulate the externalities. So, while cryptocurrencies offer potential for creative destruction — and significant value creation — ignorance among regulators and lawmakers regarding cryptocurrencies is unacceptable and dangerous.

It is fashionable in crypto communities to celebrate the potential impact on USD hegemony. This is a short-sighted, libertarian-esque screed whose loudest barkers are often the greatest beneficiaries of our economy, and who are using their influence to drive history’s greatest pump-and-dump. Crypto offers great possibility, but not all of those possibilities are good for the commonwealth.

Democracies lose when the wealthy evade taxes, or when organized crime can easily move and store capital. A decentralized financial system runs the risk of neutering enforcement. US adversaries have a vested interest in the success of any technology whose success may come at the cost of the USD. China has announced a state-sponsored cryptocurrency (AKA Big Brother Coin) and India may be the swing vote to determine whether cryptocurrencies or the Yuan will reign supreme on the global stage.

The velvet glove of US values surrounding our unrivaled ability to deliver force (globally) is our nation’s most fearsome legionnaire. USD primacy is a close second. Indeed, they are codependent — anything that threatens both must be better understood.

Before we all had mask collections and Zoom accounts, obesity was the defining public health crises of our time. Now, though it has been (temporarily) superseded by a pandemic that has killed half a million Americans, it is the leading aggravating factor in that new scourge.

Obesity is associated with many of the leading causes of death in the US (diabetes, heart disease, and stroke). If that doesn’t scare you, let’s put it in the language of America: money. In 2016, the US spent an estimated $480 billion on obesity-related costs and $1.24 trillion in indirect work loss costs. Or roughly … all the bitcoin.

It’s only getting worse: Today, 42% of Americans are classified as obese, up from 34% in 2007-2008. While obesity is a direct result of behaviors like overconsumption and inactivity, its prevalence is a symptom of structural inequality and just bad structures — namely, the food industrial complex, which profits greatly off the sales of cheap, unhealthy foods and that disproportionately targets low income people and people of color.

While obesity is not a new concern, it has gained new urgency, even as we are increasingly reluctant to address it. Just as masking has been politicized by the right, open conversation about the dangers of obesity has been politicized by the left. Media has moved from fat-shaming (reprehensible) to willful blindness towards the dangers of excess weight (inexcusable). Even as obesity rates increase, fewer people are trying to lose their dangerous excess weight.

But we cannot ignore the underlying data: COVID-19 is especially dangerous for the severely overweight. In fact, the CDC estimates that being obese triples the odds of being hospitalized for COVID. 78% of people hospitalized for COVID-19 were either overweight (28%) or obese (50%). 88% of COVID deaths in the first year of the pandemic occurred in countries where over half the population is overweight — led by the US.

Of course, obesity is not just a function of willpower, but also of genes, stress levels, and access to healthy food and healthcare. As industrial food production has scaled, our instincts for seeking salty, sugary, and fatty foods have not modulated. So, while individuals are not to blame, we are fighting an uphill battle: Once a person becomes severely overweight, their body changes and fights efforts to lose the excess weight and keep it off. If our government doesn’t tackle the obesity epidemic with the same urgency as it would any other public health crisis — starting with open, non-politicized conversation — we are destined to become a nation lacking the strength and vitality that has for so long cemented us as leaders on the global stage.

The US is increasingly alone, broke, and overweight.

Life is so rich,

P.S. Registration for my next Brand Strategy Sprint, where I teach the frameworks and strategies of the world’s most successful brands, is now open. Join us.