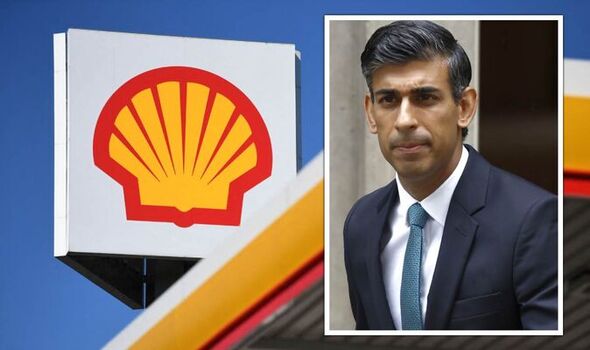 The British multinational said it had adjusted earnings for the three months to the end of September of £8.2billion, twice that of the same period last year. It was below its second quarter’s record high of £9.9billion.

The oil giant Shell admitted it has avoided paying a windfall tax of 25 per cent introduced in May due to to its heavy investment in the North Sea.

Climate activists and opposition MPs are urging the Prime Minister to go further on his windfall tax as oil and gas giants see profits soar over Russia’s war in Ukraine.

Shell will pay an enhanced corporation tax of 40 per cent, double that faced by companies in other industries.

Campaigners pointed out that the windfall and corporation taxes would only fall due on Shell’s UK earnings, about a tenth of its global income.

They also pointed out that Shell could reclaim tax on the £25billion investment it plans to make in the UK energy industry over the next 10 years.

Downing Street said “nothing is off the table” ahead of Chancellor Jeremy Hunt’s autumn budget on November 17.

“Rishi Sunak’s existing plans are a pale imitation of Labour’s windfall tax and would see billions of pounds of taxpayer money go back into the pockets of oil and gas giants through ludicrous tax breaks,” he said.

“It tells you everything you need to know about whose side this Conservative Government is on that they refuse to back Labour’s proper windfall tax whilst working people, families, and pensioners suffer.”

In May, while chancellor, Mr Sunak introduced a windfall tax that strongly incentivised firms to invest and has not stopped them paying billions of dollars to its shareholders this year.

He announced the 25% surcharge on extraordinary profits to help pay for a package of support for households struggling with the cost-of-living crisis.

His plans are due to lapse at the end of 2025 or sooner if oil and gas prices return to “historically more normal levels”, as Vladimir Putin’s invasion pushes up prices.

Greenpeace called for a “proper tax” on the energy giant’s profits as they continue to bank billions.

“Even the chief executive of Shell has admitted that oil and gas companies should be taxed more to help protect vulnerable households.

Asked on LBC radio about an extended windfall tax, Tory party chairman Nadhim Zahawi said that “absolutely the Chancellor and the Prime Minister will look at every decision”.

But he warned against creating “a tax system that disincentivises investment”.

The Prime Minister’s official spokesman said: “I am not going to get into tax measures ahead of a fiscal event.

“It is accurate to say, as we made clear, no options are off the table given the economic circumstances. But clearly that is for the autumn statement.”

Mr Sunak does not believe the current levy has been hindering investment, the spokesman said.

Banks have also been enjoying bumper profits as they benefit from rising interest rates.

Downing Street did not rule out a windfall tax on them either, with the spokesman saying: “I haven’t asked the Prime Minister directly but broadly speaking hypothetical tax measures are for a fiscal event.”