A willow tree memorializing the African American lives lost in a 1919 massacre in Elaine, Arkansas, in one of the deadliest racial conflicts in U.S. history, was chopped down this week in what some fear was an act of hate.

Mary Olson, president and founder of the Elaine Legacy Center, posted about the incident on Facebook Wednesday. “The Living Memorial, memorializing all those who lost their lives in the Elaine Massacre of 1919 was chopped down at the base today and the Memorial tag stolen,” she said in the post.

Elaine Police Department Chief Alvin Scaife said the tree “appeared to be cut down,” but that state authorities were handling the case. The Arkansas Department of Parks and Tourism, which manages the tree, did not respond Saturday morning to a request for comment. The Department of Justice could not comment on whether a hate crime investigation was underway.

More than 200 African American sharecroppers were massacred by a white mob in September 1919 in Elaine. Bloodshed spread throughout the country that year during “Red Summer,” when hundreds of African American men, women and children were burned alive, shot, lynched or beaten to death by white mobs.

The Living Memorial tree, funded by the Elaine Legacy Center, was planted in April to memorialize the lives lost a century ago.

“Right now, all we know is that we had a wonderful ceremony, and then we’re notified that the tree has been destroyed,” said Elaine resident Faye Duncan-Daniel, 75.

Ducan-Daniel’s ancestors lived in Elaine during the 1919 massacre. She grew up in Elaine and lived there until she was 16 years old. As a child, Duncan-Daniel attended a segregated school that didn’t have a library. She said she constantly lived in fear.

With more than 50 family members still in the Elaine area, Duncan-Daniel moved back to her hometown in 2006 to retire. For her, the Living Tree Memorial was a symbol of love and brotherhood.

“On the one hand, it’s frightening to think that someone could be that viciousness and inconsiderate of other people’s humanity. But we have to go back and plant the tree again and communicate our message of brotherhood. That’s what that tree stood for,” Duncan-Daniel said. 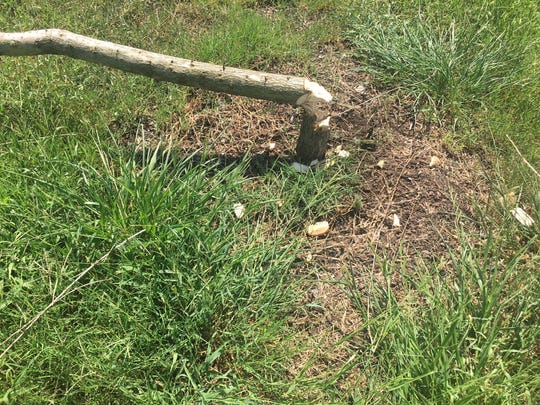 The Living Memorial appears to be chopped at the Arkansas Parks and Tourism bicycle path trail head in Elaine, Arkansas on Wednesday, August 21, 2019. (Photo: Mary Olson)

Duncan-Daniel said her family never talked about the 1919 massacre when she was growing up. “They didn’t want to teach us to hate,” she said.

Anthony Davis, 63, a researcher at the Elaine Legacy Center, has lived near Elaine his whole life. He said his grandfather was a community leader living in Elaine in 1919, and he was put under house arrest by white men from the nearby town of Helena during the massacre. While he said he was deeply hurt by what happened to the Living Memorial, Davis also sees it as an opportunity to heal.

“It’s a hate crime. They don’t even want our memories to survive. It’s like they’re trying to wipe our memories away,” Davis said.

Judge Wendell Griffen, an Arkansas Circuit Court judge, pastor, and civil rights advocate, said in an interview with WREG-TV that the act may have been a hate crime.

What happened in Elaine?

While many Americans were not taught about the 1919 Elaine Massacre, it was by far the deadliest racial confrontation in Arkansas history and possibly the bloodiest racial conflict in the history of the United States, according to the Central Arkansas Library System’s Encyclopedia of Arkansas. Concerns over the treatment of black defendants in the trials that would follow catalyzed a Supreme Court case that redefined the 14th Amendment and extended due process rights.

In 1919, black men were returning home from World War I, and many were moving north to escape the Jim Crow laws of the South. White Americans across the country saw blacks as competition for jobs, homes and political power.

Tensions in Elaine erupted on September 30 of that year. A group of approximately 100 African American sharecroppers working on the plantations of white landowners were attending a meeting of the Progressive Farmers and Household Union of America at a local church. They wanted to discuss how to obtain better pay for their cotton crops, according to the Encyclopedia of Arkansas.

It is unknown who fired first, but a shootout began that night between black armed guards surrounding the church and three individuals parked in a vehicle outside the church. One of those individuals, a white security officer, died. 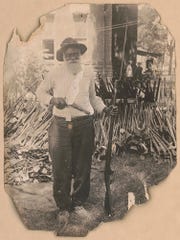 The next day, an estimated 500 to 1,000 armed white people from Arkansas and Mississippi traveled to Elaine to quell a supposed “black insurrection.” They attacked African Americans across Phillips County. The governor called in 500 federal troop, who arrested hundreds of African Americans and killed some.

Over a four-day period, hundreds of African Americans died, though the true number of black deaths has long been subject to debate, according to the Encyclopedia of Arkansas. Five white men died.

Following the violence, 12 black men, who became known as the “Elaine 12,” were convicted of murder and sentenced to death by all-white juries. While six of those convictions were overturned, the other six eventually reached the Supreme Court. No white people were tried.

In the 1923 Moore vs. Dempsey ruling, the Court overturned the six convictions. It argued that the trial court had failed to uphold the defendant’s due process rights by allowing armed white mobs to dominate the trial. 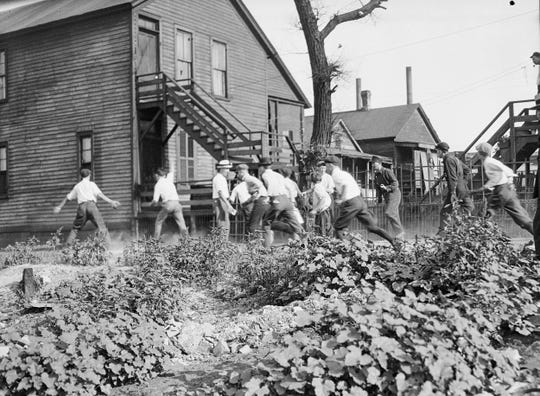 In this 1919 photo provided by the Chicago History Museum, a victim is stoned and bludgeoned under a corner of a house during the race riots in Chicago. (Photo: AP)

“A trial for murder in a state court in which the accused are hurried to conviction under mob domination without regard for their rights is without due process of law and absolutely void,” Justice Oliver Wendell Holmes wrote in the majority opinion.

The ruling was a watershed moment in the history of African American rights.

“This was a seismic shift in how our Supreme Court was recognizing the rights of African Americans,” Michael Curry, chair of the NAACP Advocacy and Policy Committee, told Smithsonian.com.

The case laid the groundwork for future legal victories for people of color.

Controversy over a new memorial

As the 100-year anniversary of the Elaine massacre approaches, locals have debated another memorial under construction. It’s going up in the city of Helena-West Helena, approximately 25 miles from Elaine.

While the 1919 violence in Phillips County first broke out in Elaine, Helena-West Helena is where the Elaine 12 were trialed by a white judge and all-white jury.

The memorial is being funded by David P. Solomon, whose family has owned land in Helena since the 19th century, according to The Arkansas Times. Solomon told the Arkansas Times that there has been pushback to the memorial “from all sides of the community.”

“White folks who don’t want to think their revered grandfather or great-grandfather did something. And black folks for various reasons, some on the basis the memorial will do nothing for poverty in Phillips County,” Solomon said.

Duncan-Daniel told USA TODAY that she wishes the memorial had been built in Elaine instead to attract visitors.

To honor this year’s anniversary, the Lee Street Community Center will hold a service of remembrance in Elaine on Sept. 28. On Sept. 29th, the Elaine Massacre Memorial will be dedicated in Helena-West Helena.

CBDT alarmed as direct tax collection is way behind target