Home » Photos show the devastation of the COVID-19 humanitarian crisis in India, where the crematoriums have been burning for so long they have started to melt

Photos show the devastation of the COVID-19 humanitarian crisis in India, where the crematoriums have been burning for so long they have started to melt

Only two months ago, India — the second-most populated country in the world — was reveling in its success of reining in the spread of the coronavirus. 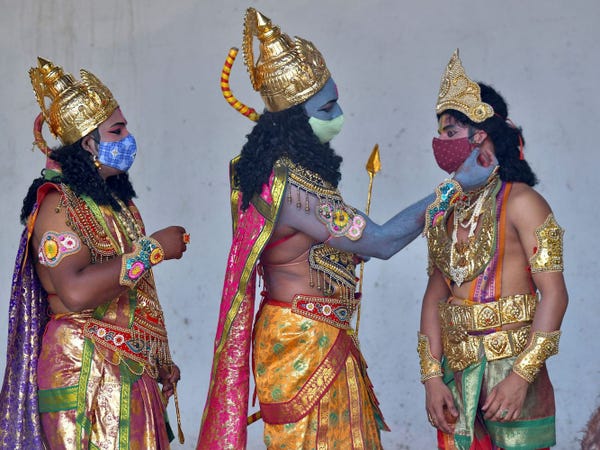 But a new coronavirus variant is suspected of stoking a catastrophic and deadly second wave that is now overwhelming the country's hospitals and crematoriums. 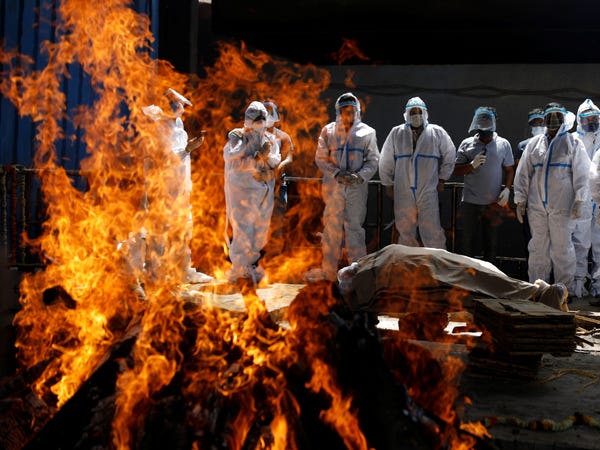 K Srinath Reddy, the president of the Public Health Foundation of India, told the Financial Times: “Health systems weren’t better prepared for it this time around. Many people in the administration across the country did not expect that there would be a ‘this time around.'”

“It was somehow presumed that we had passed the pandemic,” he added.

On Friday, India reported more than 332,000 coronavirus cases in one day — the highest ever recorded by a single country. 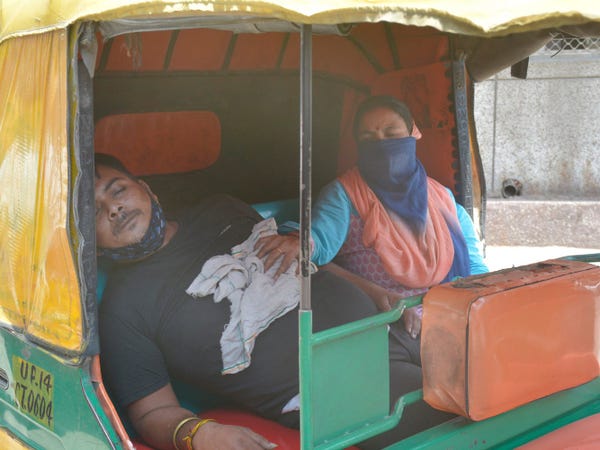 Since the start of the pandemic, the country has recorded more than 16 million cases and 186,000 deaths, according to a tracker by Johns Hopkins University.

This means it has now overtaken Brazil, with the second-highest number of confirmed cases worldwide. The first remains the US.

Experts say the actual death toll is likely much higher than the official numbers due to backlogs at crematoriums and people dying before they can get to hospitals. 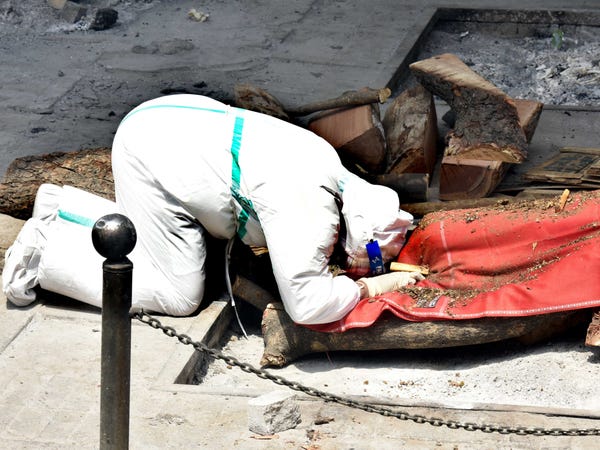 The capital, New Delhi, is recording more new daily infections than any other Indian city, with the number of cases doubling every five days. 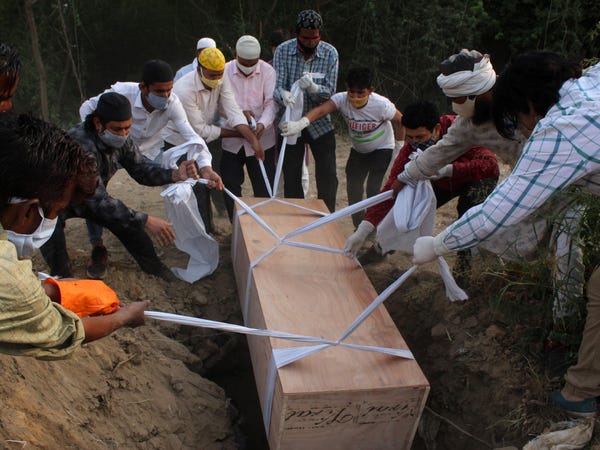 One in three people in Delhi is testing positive, according to BBC News.

The city announced a week-long lockdown on Monday, prompting many migrant workers to rush back to their villages. 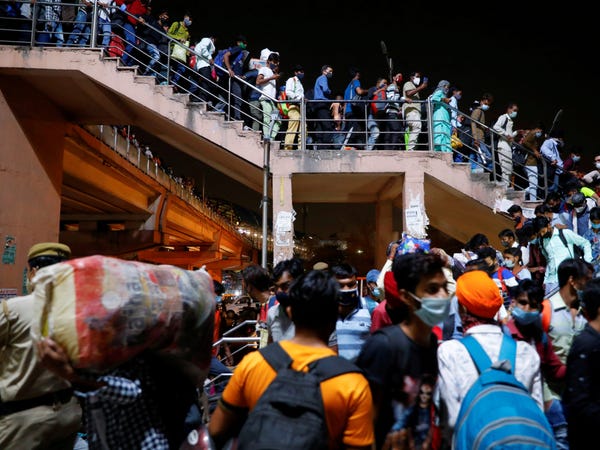 India's healthcare system is crumbling under increasing pressure. Government officials said this week that New Delhi had run out of beds at hospital intensive care units. 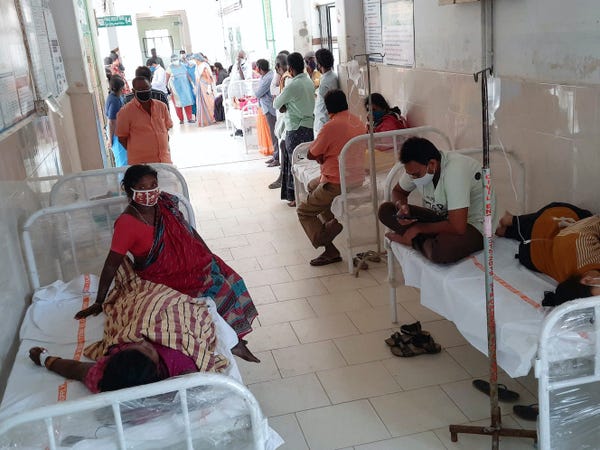 Overrun hospitals have prompted the social media hashtag #COVIDSOS, which people use to share information about medical facilities that may still have space. 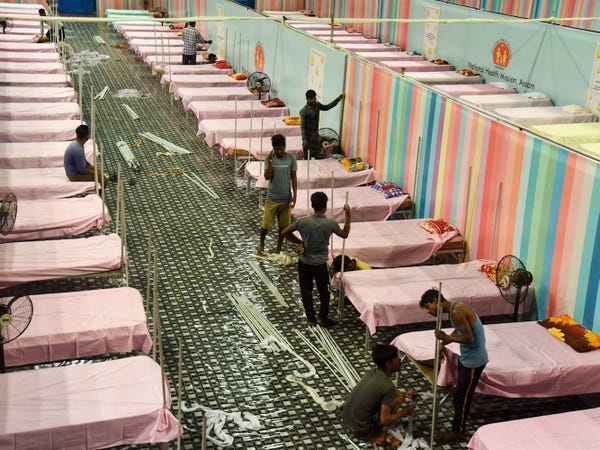 This distressing video shows numerous COVID-19 patients on stretchers dying outside hospitals or in ambulances because there is no space to take them in.

Hospitals across the country are also struggling with medical oxygen shortages. Some say they only have a few hours of supply left. 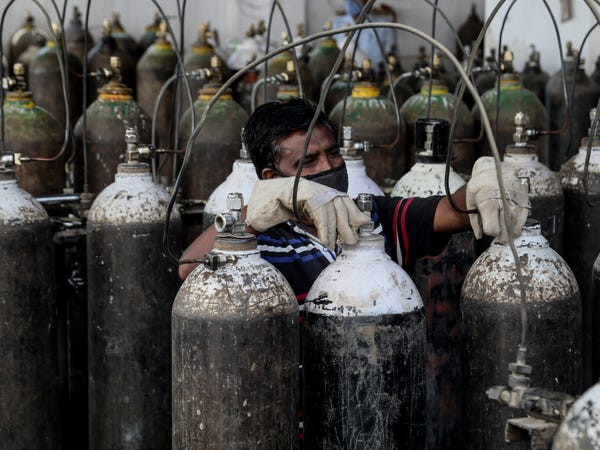 Relatives of COVID-19 patients are becoming so desperate for oxygen cylinders that, in some cases, they've stolen them from hospitals. 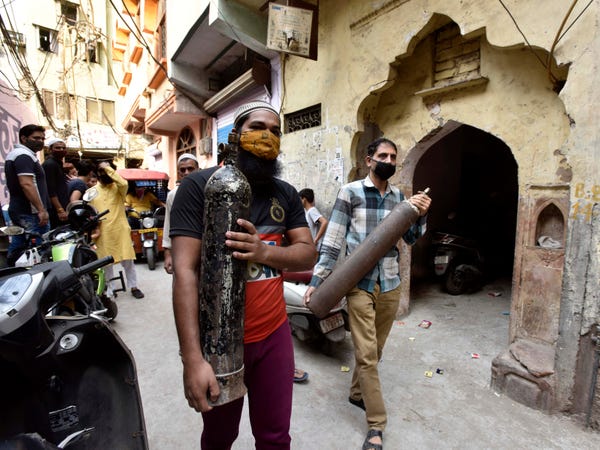 Desperate relatives stole the cylinders from a storeroom at Damoh district hospital in Madhya Pradesh, a large state in central India.

One doctor complained to India Today: “Under such circumstances, it is becoming increasingly difficult for doctors and paramedic staff to perform their duties.”

To add to the worsening crisis, an oxygen tanker at a hospital in Nashik, India, leaked earlier this week, killing 22 coronavirus patients. 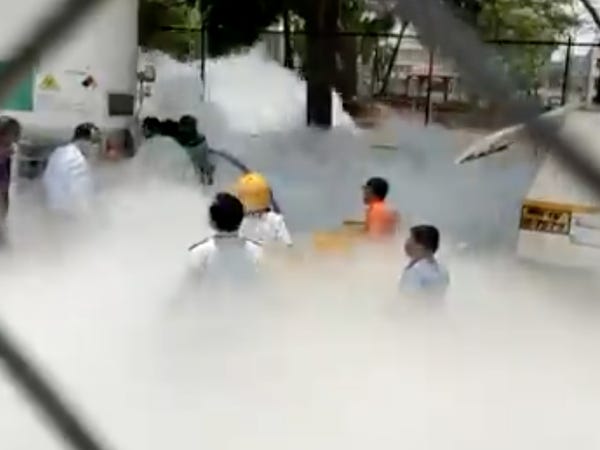 The unprecedented death rates are overwhelming the nation's crematoriums. 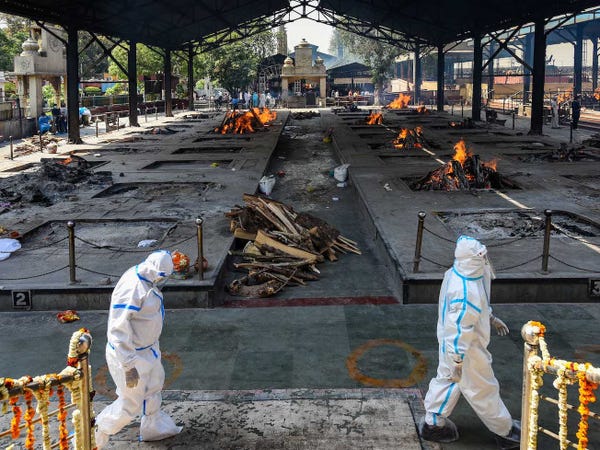 As the crematoriums are overrun, people are turning t mass burials in makeshift facilities like parking lots. 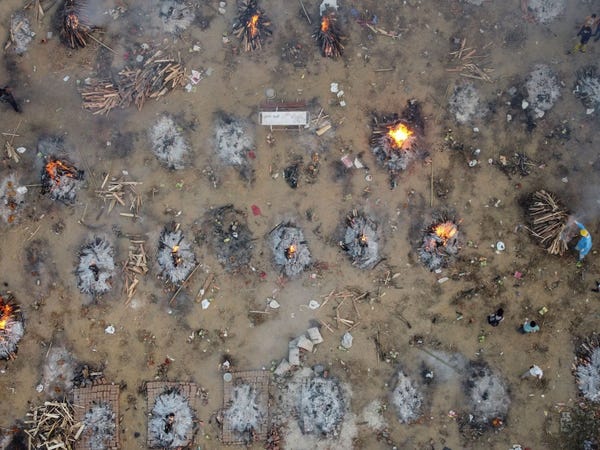 One Delhi resident, Nitish Kumar, told Reuters this week that he was forced to keep his dead mother’s body at home for nearly two days because he couldn’t find any space for her in the city’s crematoriums.

He ended up cremating her in a parking lot adjoining a crematorium.

In the Indian state of Gujarat, gas and firewood furnaces at crematoriums have been running so long without a break that metal parts have begun to melt. 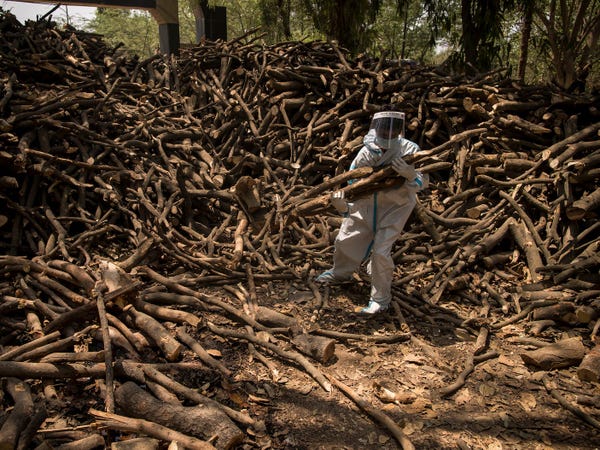 Experts have blamed politicians for accelerating the surge by allowing mass gatherings for elections to take place. 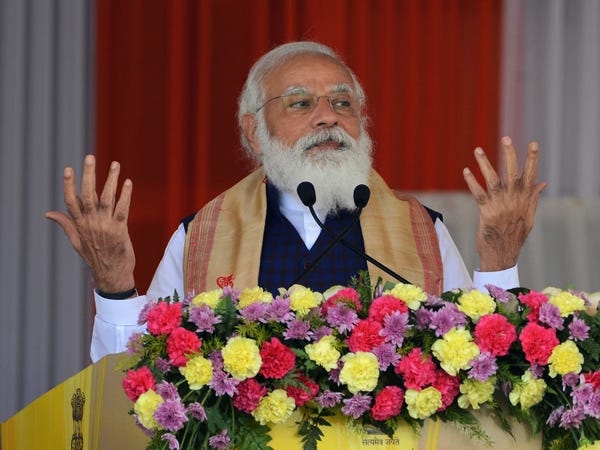 Earlier this month, the government allowed the Kumbh Mela Hindu festival attended by millions to proceed and take a holy dip in the Ganges river. 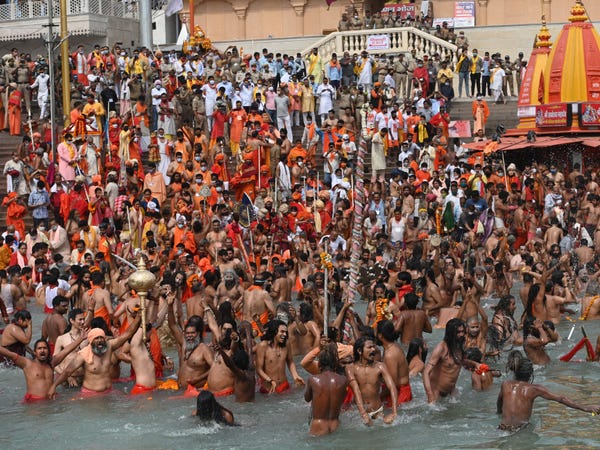 "The government is not doing anything. Only you can save your family. You are on your own," one New Delhi resident told Reuters this week. 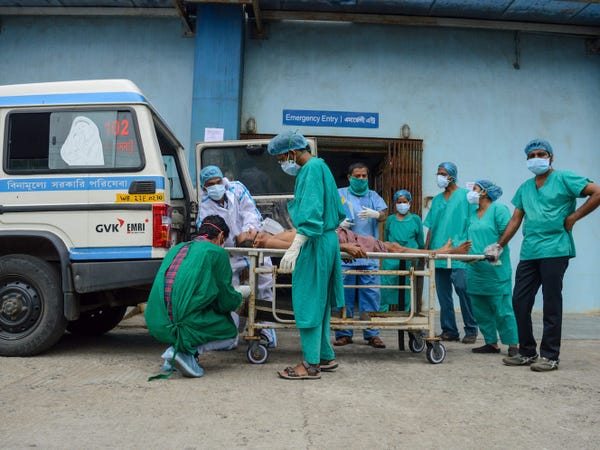 Scientists say the recent surge has been prompted by India's new variant, named B.1.617. 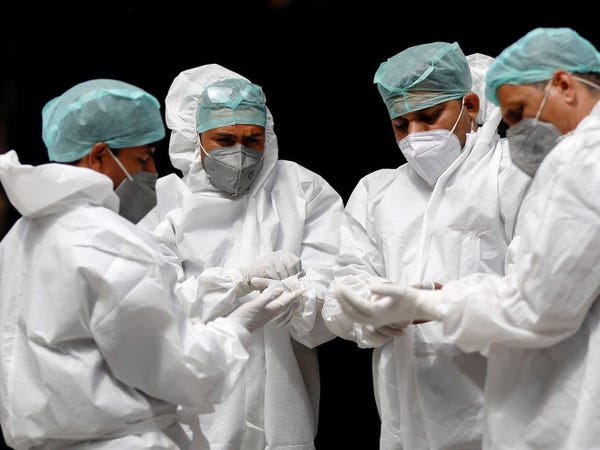 Little is still known about it, but some experts believe it is more infectious and vaccine evasive. 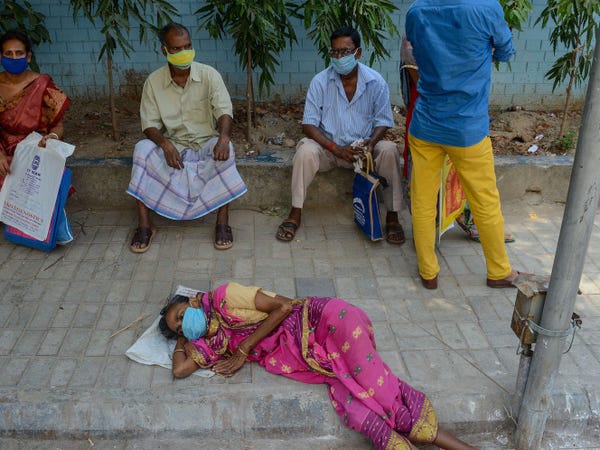 Despite being the world's largest vaccine manufacturer, the country is also struggling to secure enough for its own population. 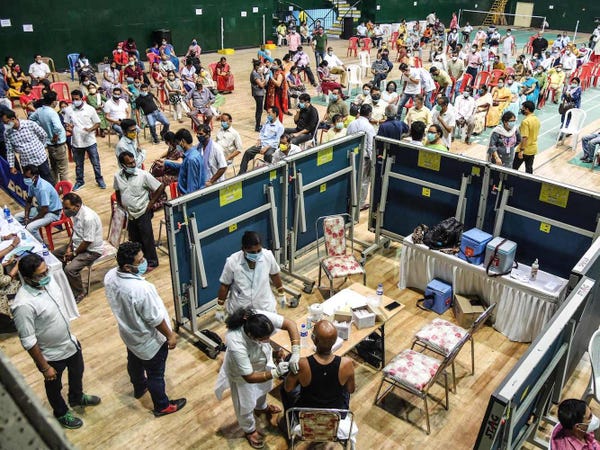 India has administered about 132 million vaccine doses so far,out of a population of 1.4 billion, the second-largest in the world 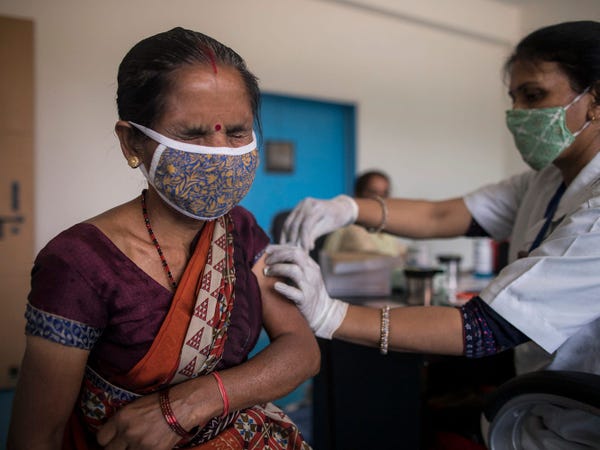 The latest surge has prompted several countries, like the UK, to impose travel bans on India. 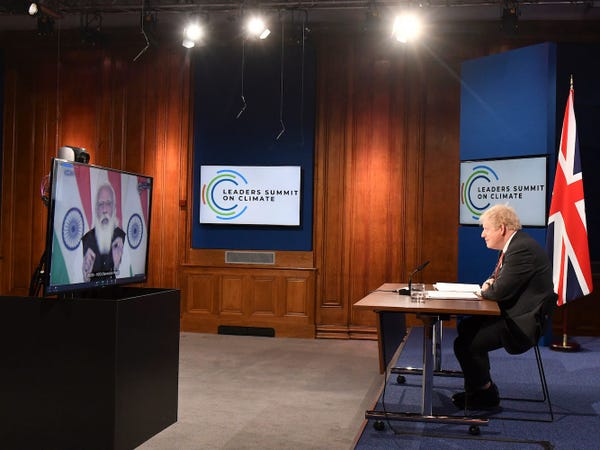