With the Los Angeles Rams finally set to get on the clock Friday after sitting idle on Day 1 of the NFL draft, Les Snead doubled his dose of Advil and went on about his business of picking players and maneuvering on the draft board.

The Rams GM, who tested positive for COVID-19 just hours before the three-day draft began on Thursday, can knock on wood and likely thank the first vaccination shot he had recently, that it wasn’t any worse. Snead said he contracted the virus from an unnamed Rams employee.

"Right before the draft (on Thursday), I took my dosage of Advil and felt really good," Snead said during a Zoom conference on Friday night. "Today, I woke up and knew I had the virus. Let me timeout. I took two doses instead of one. I scheduled my day. ‘Okay, I’m going to really feel bad up until …' I think it was 11 or 12. Then at 12, took some Advil and started feeling really good. I’m fortunate in that way."

WINNERS AND LOSERS: Patriots prosper, Cowboys confound on Day 2 of the NFL draft

NFL DRAFT TRACKER: Analysis on every pick in the second and third rounds

Snead was speaking from the garage at his home, which he has converted to a home office and weight room — and now a temporary bedroom while barred from the rest of the house.

Rams coach Sean McVay was also on the Zoom conference that followed the selections of Louisville wide receiver Tutu Atwell (57th overall) and South Carolina linebacker Ernest Jones (103rd). McVay was hanging at "The Rams House" — a swanky pad in Malibu that the team set up as its draft headquarters.

"He looks too good to be having COVID," joked McVay, who was in close contact with Snead early in the week but tested negative for the coronavirus. "He’s faking it. Man, he just wanted to stay at home and do his spiel that he did last year. He looks too healthy to have COVID right now." 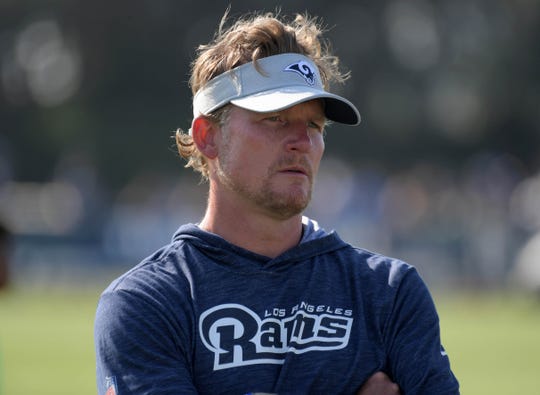