Shonda Rhimes is now officially the Empress of Netflix, thanks to the massive success of Bridgerton and a rare look today under Netflix’s data hood.

“We’re trying to be more transparent with talent, with the market,” Ted Sarandos said
Monday, making no bones that the streamer’s info is still is “a big black box, mostly.”

Speaking today at the Code Conference at the Beverly Hilton, the streamer’s co-CEO dropped some slides full of metrics that showed Season 1 of the period drama is the most initially watched and most engaged with series on the service.

Additionally, this self-described attempt to be “more transparent” revealed that the Russo Brothers’ executive produced Extraction was the most watched film on Netflix and 2018’s Sandra Bullock starrer Bird Box was the most engaged with feature – as you can see in the charts below looking at the first 28 days after release: 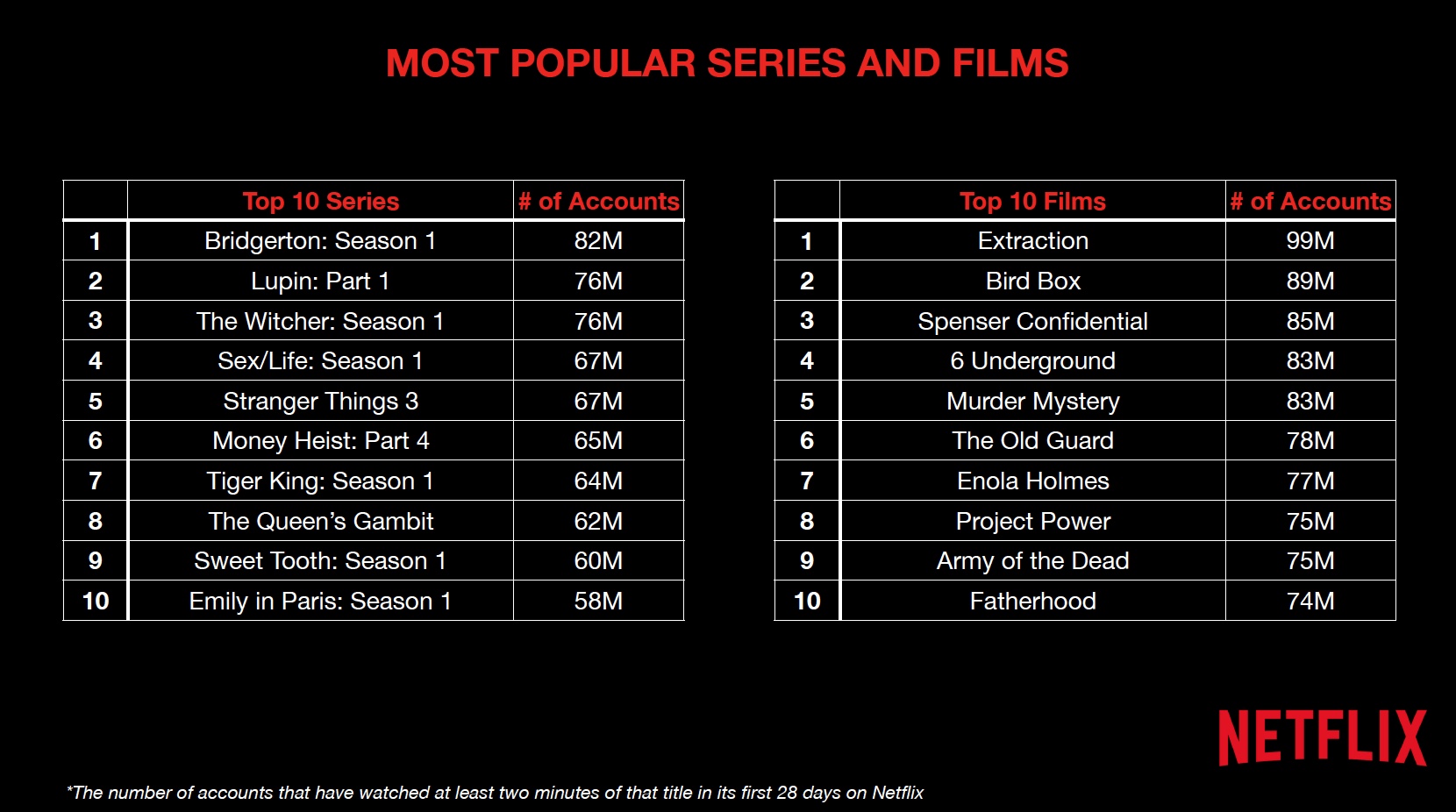 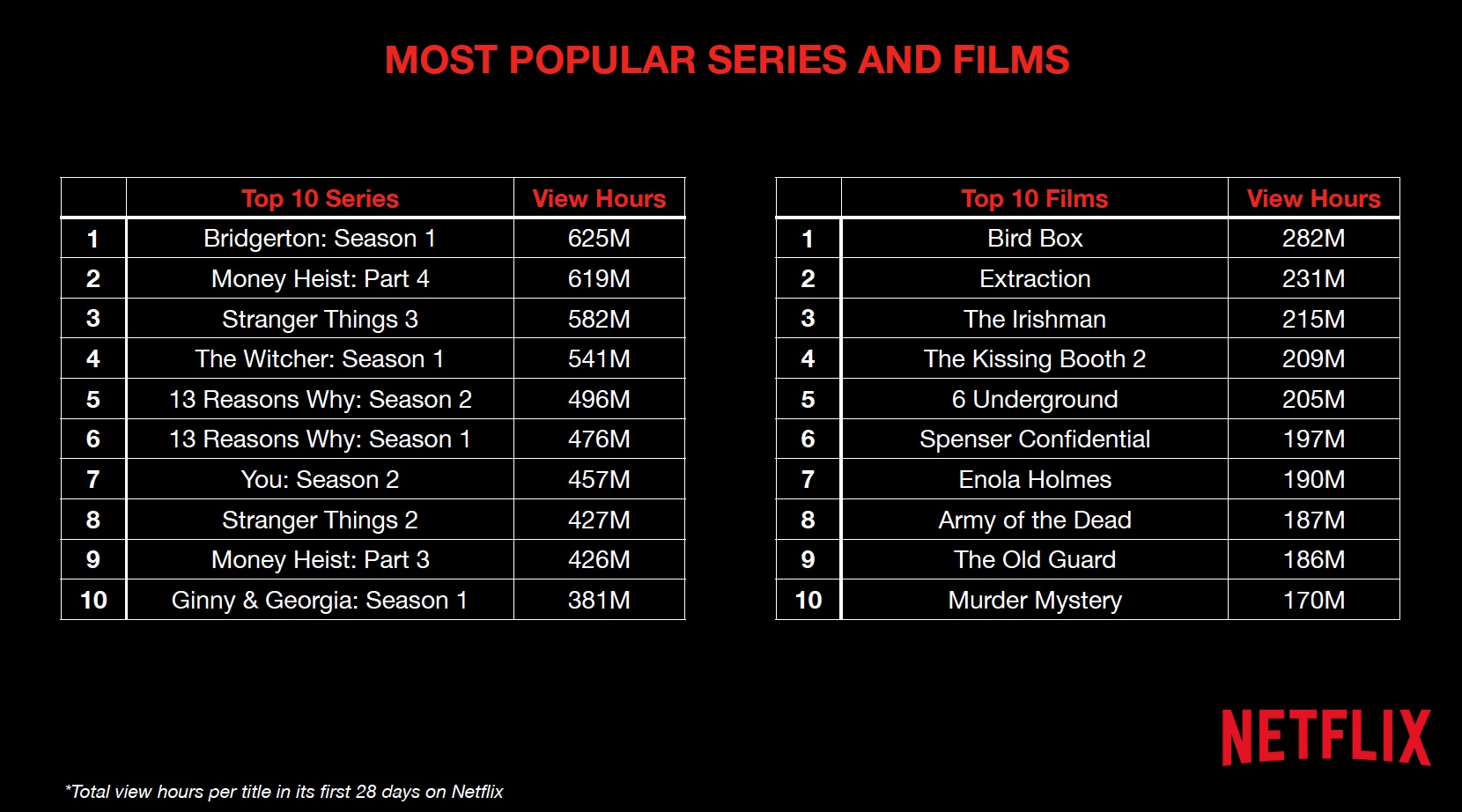 “For a subscription business, engagement really matters,” Sarandos bluntly said in unveiling the metrics, which included not a single licensed series or film. “This is a real indicator of value,” he added with no small amount of glee.

In that vein, the Netflix co-chief parried probes into the multi-million overall deals the streamer has inked with the likes of Rhimes, Ryan Murphy, Courtney Kemp, the Obamas, Kevin Hart and Greg Berlanti & Sarah Schechter, among others. “It’s way too early to tell, you have to look back on this things over many years,” he said of the pricey agreement, before let the true takeaway out: Shonda’s deal will be successful just on Bridgeton.”

Looking at the strong performance of Season 3 of Stranger Things in both the chart categories revealed today, Sarandos was straightforward and coy almost simultaneously. Franchises are good, but what you want are hits,” he told the Beverly Hills audience in reference to the 1980s set Duffer Bros show. Stranger Things is “a franchise being born” Sarandos said and hinted at “spin-offs.” There has been talk that ST star Millie Bobby Brown could be taking lead in an extension of the Duffer Bros universe under the terms of her own big Netflix deal.

In the wide ranging and sometimes blatantly evasive sit-down with NYT columnist Kara Swisher, the always self-pitching Sarandos once again promised Netflix really wasn’t interested in live sports, news or buying a theater chain. He did disclose the company was moving ahead with their foray into gaming (“Focusing on mobile …stay tuned”) and his relationship with fellow CEO Reed Hastings (“He’s made me a better tech exec, I’ve made him a better content exec”).

At one point, pressed by Swisher, Sarandos ventured a glimpse of his take on the big bucks legal battle between Disney and Black Widow’s Scarlett Johansson over hybrid release windows and profit participation. “I watch these things as a spectator I would have said this or said that,” he admitted. “I’m fortunate that we have not been in those shoes,” Sarandos quipped of the public vice the now Bob Chapek run House of Mouse finds itself with the biggest female star in the world.

Throwing out another bit of red meat for the business and tech crowd in the ballroom and watching online, Sarandos added: “Talent has to be respected and compensated”

However, Sarandos was more loquacious on the muddle a number of Netflix’s competitors finds themselves on getting features to market during the pandemic and the shifting to streaming for big name and big budget pics.

“I do think that movies premiering on television at home on that comfortable coach is pretty sweet,” he exclaimed. “But if you want to go out, I can’t compete with that,” Sarandos told Swisher.

On the subject of filmmakers and other creatives taking a swipe at big media companies opting for a streaming release or hybrid releases, Sarandos was frank. “If they are talking from themselves that is a pretty short debate. If they are talking for the consumers, that will play out in attendance.”

Even with subscriber growth stalled, the past few weeks have seen a strong show of the streamer’s pervasive power in Hollywood with a The Crown-fueled record decades long 44 awards haul at the Emmys on September 19. Then on September 24, Sarandos basked in the official opening of the much-delayed Academy Museum of Motion Pictures in his Board Chair capacity. September 25 saw the streamer launch its massive virtual fan event Tudum (named after the sound when a show starts on the system) with a sneak peek at Season 2 of Bridgerton and much more.

In the all-telling stock market, Netflix has had an even better public showing of late.

With a current a market valuation of $252 billion for the company, Netflix shares have been in record territory, establishing a new all-time high of $615.60 earlier this month. They rose a fraction today, closing the trading day at $592.64, and have gained 14% in 2021 to date. In that vein, investors are eagerly awaiting the streaming giant’s third-quarter financial report, which is scheduled for October 19.

After a heartfelt introduction looking over the pandemic by a cold suffering Swisher, the three-day conference at the Beverly Hilton kicked off today with an agenda that not only includes the Netflix exec, but the like of WarnerMedia boss (for now) Jason Kilar, Endeavor’s Ari Emanuel, Elon Musk and more coming up

The Code Conference continues until September 29.

Dade Hayes contributed to this report