Home » Business » Naomi Osaka Is Talking to the Media Again, but on Her Own Terms

Naomi Osaka Is Talking to the Media Again, but on Her Own Terms

In early May, a couple of weeks before she tweeted that she wouldn’t appear at a required news conference at the French Open, Naomi Osaka was on a Zoom call with a writer for Racquet magazine who was trying to gain insight into the athlete’s inner life.

Ms. Osaka said she’d gone to the protests in Minneapolis last year and had been moved by what she saw.

“It was a bit of an eye opener,” she said of the experience, “because I’ve never had time to go out and do anything physically.”

Ms. Osaka ignited a furious debate over the role of the tennis media with her announcement that she’d pay a $15,000 fine rather than attend a news conference that she said was bad for her mental health. Her decision, and the response from tennis officials, ended with her withdrawal from the French Open. The British tennis writer Andrew Castle called her decision “a very dangerous precedent” that would be “hugely destructive and a massive commercial blow to everyone in the sport.”

If the freak-out over the cancellation of an inevitably boring news conference seemed a bit oversized, it was because Ms. Osaka didn’t just open a new conversation about mental health in sports. She touched a raw nerve in the intertwined businesses of sports and media: the ever-growing, irresistible power of the star. We journalists are touchy about retaining what is often pathetically minimal access to athletes. The media was once the main way that sports stars found fame, glory and lucrative endorsements, and a glossy profile can still play a role in elevating an obscure player. But the rise of social media and of a widening array of new outlets has produced a power shift, as my colleague Lindsay Crouse wrote in June, “redistributing leverage among public figures, the journalists and publications that cover them.”

Ms. Osaka walked into the middle of that dynamic during the French Open. While tennis news conferences can be quite weird — some local journalist in the room amuses the traveling press by confusing one Russian player for another, or asks a particularly off-the-wall question — the mood is usually pretty sedate. Most players roll with them without complaint. And Ms. Osaka wasn’t being grilled about her personal life or her mental health. She was bothered by questions about her performance on clay courts. Another recent question concerned what she planned to wear to the Met Gala, a high-society Manhattan event of which she is a co-chair.

She has become the best-paid woman in sports, earning about $60 million last year according to Forbes, and almost universally positive coverage hasn’t hurt her ability to build a portfolio that includes swimwear and skin care lines, two Nike sneakers and the Naomi Osaka bowl at Sweetgreen. And she drew broad and favorable coverage when she provoked a tournament into taking a day off to make a statement on police killings of Black Americans. She has a cover essay in the next issue of Time that is conciliatory toward the media even as it expands on her statements about mental health, a person familiar with it said.

“The press is a willing accomplice to what most of these athletes are trying to accomplish,” said the Tennis Channel commentator Brett Haber. 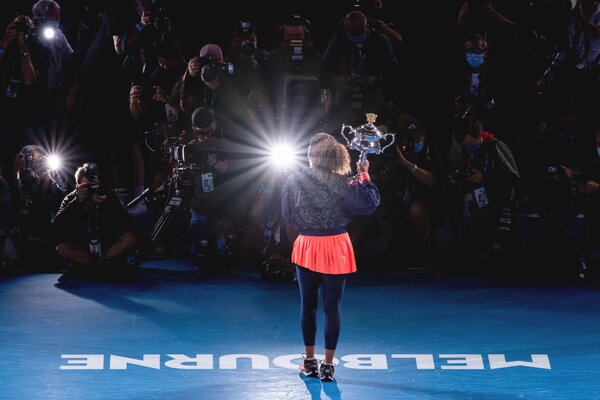 I have an impulse to defend the need for athletes to give news conferences, on the principle that what Naomi Osaka does today, Joe Biden will do tomorrow. But there’s an additional layer that muddies the media’s position, which is that athletes are only talking to us because they’re under contract. “I’m just here so I won’t get fined,” the running back Marshawn Lynch groused repeatedly in a video Ms. Osaka also posted. There’s something a bit compromising in athletes appearing at a news conference not because they need, or even respect, the power of journalism but because a corporation is paying them to sit on the dais and reluctantly have no comment.

Enterprising reporters can still get insight from news conferences, and many athletes don’t share Ms. Osaka’s stress about them. “It’s like pretty easygoing,” the Polish tennis player Iga Swiatek said last week. But while independent journalists can still deliver everything from breakthrough investigations to commentary, the role of journalism as a mere conduit for athletes’ words doesn’t make that much sense anymore. Ms. Osaka “could do a press conference on Instagram live if she wanted,” her agent, Stuart Duguid, told me.

The ritual is “a relic of an era when they needed the press — when the press were the accepted conduit between athletes and the public,” a Guardian sportswriter, Jonathan Liew, said in an interview.

But the Osaka story has broader resonance because sports, and the media that covers them, are often leading indicators of the direction in which we’re all headed. In 2007, Hillary Clinton’s top spokesman, Howard Wolfson, told me he was preoccupied with Major League Baseball’s site, MLB.com, and how the league had created a media entity that it totally controlled. Why couldn’t a politician and her campaign do the same, he wondered? It didn’t quite work for her, but by 2008, Barack Obama was producing videos far more compelling than anything the networks were making. In 2016, the Trump Show was the best thing on TV, syndicated to your local cable network.

The assault on the independent sports media reached its peak with the 2014 introduction of The Players’ Tribune, with the promise of giving players their own voice. But that effort pretty much fizzled, selling to an Israeli media company in 2019. Though it occasionally published powerful essays, it mostly had that sterile quality of a glorified news release.

Athletes’ more successful ventures into media have avoided taking on journalism directly. The model is the Los Angeles Lakers’ LeBron James, who has spent a decade building a media company that has done deals for TV shows and movies with HBO, Netflix, Warner Brothers and others. And at its best, these platforms can elicit more than you’d get at a news conference. Mr. James built his company, in part, on the insight that athletes would open up to one another, and “didn’t want to be asked questions that everyone should know the answers to,” said Josh Pyatt, the co-head of WME Sports, who has been at the center of building media companies for athletes.

On a recent episode of “The Shop,” produced for HBO by Mr. James, the quarterback Tom Brady acknowledged the wooden quality of many athletes’ comments to the press.

“What I say versus what I think are two totally different things,” said Mr. Brady, who co-founded another media company, Religion of Sports, with Michael Strahan, the former New York Giant and current “Good Morning America” host. “Ninety percent of what I say is probably not what I’m thinking.”

Who wants that? But somewhere between the compulsory news conference and the glory days of Sports Illustrated, there’s space for a new independent sports journalism, one that reckons with the power athletes now wield on their own platforms but also retains a degree of journalistic independence that most of the athlete-owned media companies don’t attempt.

That, at least, is the thinking behind Racquet, a gorgeous print tennis quarterly that started in 2016 with literary ambitions (the first issue included not one but two reconsiderations of the novelist David Foster Wallace) and has an ambitious, diverse roster of writers. Its next issue, due in August, will be guest edited by Ms. Osaka. It includes the interview with her (by Thessaly La Force, who is also a features director of T: The New York Times Style Magazine); an essay on the Japanese discovery, through Ms. Osaka, a Japanese citizen, of the Black Lives Matter movement; and a photo essay on the tennis culture in Ms. Osaka’s father’s native Haiti.

A tennis media that revolves around daily news cycles is “still living in an age where pulling quotes from a presser makes a headline, makes a story,” said Caitlin Thompson, a former college tennis player and veteran journalist who is Racquet’s publisher and co-founder, with David Shaftel. “They’re not operating in a world where an athlete can reach more people and be more attuned to the larger cultural and social contexts than they are.”

Racquet has tried to straddle those worlds. Its contributors include Andrea Petkovic, a top German player (and another Foster Wallace fan), and the Greek player Stefanos Tsitsipas, who is also a photographer. But it also published a tough investigation of allegations of domestic abuse against the German tennis star Alexander Zverev. And Thompson said that younger players “understand what we’re doing because they’re children of the internet — they’re all Gen Z.” The Australian Nick Kyrgios, for instance, has a “context in which he wants to be seen, which is this kid playing Call of Duty between matches and being more into the Celtics than the men’s tour,” Ms. Thompson said. (The August Racquet issue also explores Ms. Osaka’s medium of choice, manga.)

Ms. Osaka skipped Wimbledon, but she’s expected to be back for the Tokyo Olympics this summer. And the Racquet issue offers a bit of the texture of a young star’s strange life — between hotel rooms and tennis courts — that you would be hard-pressed to find at a news conference.

Ms. Osaka sometimes describes herself as shy, but she told Racquet: “Tennis is a thing that I’m least shy about. At the end of the day, even if I don’t win that match, I know that I have played better than 99 percent of the population, so there’s not anything to be shy about.”