McDonald’s has been forced to pull milkshakes and bottled drinks from its menu due to supply chain issues, it said in a statement on Monday night.

The fast food chain, which operates some 1,300 restaurants across the UK, has become the latest victim of supply chain disruptions that are currently roiling England, Scotland, and Wales.

In a statement, McDonald’s said that bottled drinks and milkshakes would temporarily be unavailable at all of its stores across the country.

“Like most retailers, we are currently experiencing some supply chain issues, impacting the availability of a small number of products,” the company said.

“Bottled drinks and milkshakes are temporarily unavailable in restaurants across England, Scotland and Wales.”

“We apologise for any inconvenience, and thank our customers for their continued patience. We are working hard to return these items to the menu as soon as possible.”

Are other retailers affected?

McDonald’s is not the first restaurant chain to be hit by shortages – last week, Nando’s was forced to temporarily close around 50 restaurants after suffering supply issues with its chicken.

The group, which operates some 400 sites around the country, also said it would lend some of its staff to its suppliers to help “get things moving” again after its business was rocked by supply chain issues.

This summer, the UK has been hit by a shortage of lorry drivers, a crisis that has affected supermarkets, restaurants, and other retailers.

There is currently estimated to be a shortfall of around 90,000 drivers. Fast food giant KFC said it was also having similar issues, warning that some items would not be available and packaging “may look a bit different to normal”.

“When you don’t have people, you have a problem – and this is something we are seeing across the whole supply chain. The labour crisis is a Brexit issue,” Mr Griffiths said.

But it is supermarkets which have been hardest hit by the HGV shortage – with customers reporting missing products like sparkling water and milk. 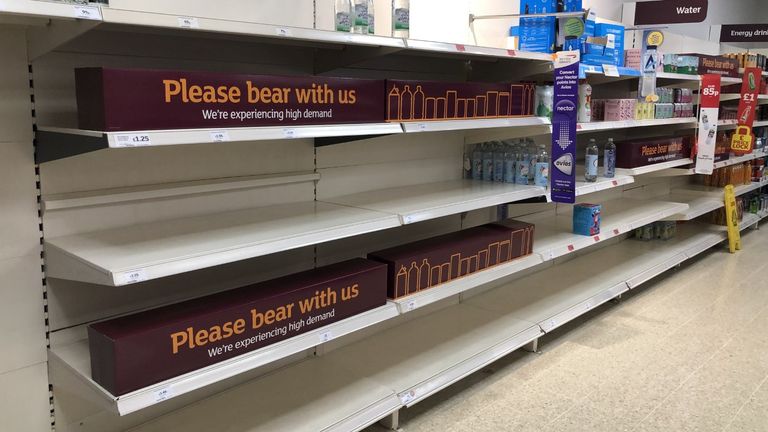 Up to a quarter of supermarket milk deliveries by the UK’s biggest dairy supplier have been unable to get through because of the shortage of lorry drivers, according to the boss of one of the UK’s largest dairy producers.

Speaking to Sky News, managing director of Arla Foods UK Ash Amirahmadi warned last month of a “summer of disruption” unless bold action was taken by the government to tackle the problem.

The dairy giant, which supplies milk to about 2,400 stores each day in the UK, had on average failed to deliver to 10% of outlets due to a lack of drivers, although this had risen to a quarter – some 600 shops – at weekends.