Even as life returns to many New York City neighborhoods, its big commercial districts are awash with empty office space. Most workers haven’t yet returned — and it’s unclear if they all will. That uncertainty is terrifying the city’s biggest office landlords, and many of them are going to great lengths to retain and attract tenants.

Lower rents or free months in multiyear leases are now de rigueur. But landlords are also trying to entice new and returning tenants with sweeping redesigns and new technology that can quickly refashion office space based on needs. They are dangling upscale new clubs and food halls available largely for tenants, hoping to draw back employees starved for workplace socializing while also pursuing new business opportunities. In one building on West 26th Street near the Hudson River, the owners — the private equity firm Blackstone and the building owner and developer RXR Realty — are showing off a 600-square-foot speakeasy tucked away in a corner of the ground floor.

Steven Durels, the director of leasing and property at SL Green, one of the city’s biggest landlords, recently told Wall Street analysts that the concessions his company and its rivals were making were “brutal.” But corporate landlords don’t have much choice. Almost one-fifth of the total market for office space in Manhattan is available for rent — a record high, according to CBRE, a real estate services firm. The amount includes roughly 79 million square feet of both unrented space and offices that existing tenants are trying to sublet.

Office landlords largely weathered the pandemic because tenants could not break their leases and had to keep paying rent. But a third of leases at large Manhattan buildings are set to expire over the next three years, according to CBRE. And as those deals come up for renegotiation, some large companies — which grew comfortable with letting employees work from home during the pandemic — are indicating that they will need significantly less space.

Analysts say a big drop in demand for office space could drag down office rents even after New York’s economy recovers.

“This is a slow-moving train wreck,” said Daniel Alpert, managing partner of Westwood Capital, a small financial firm. “People are dumping space on the market, and it’s all quality space.” Mr. Alpert, who has worked on dozens of commercial real estate transactions in his career, said that from the window of his 33rd-floor office in Bryant Park, he could see that the neighboring skyscrapers remained virtually empty.

Office buildings in the New York metro area are playing host to about 21 percent of their prepandemic crowds, according to Kastle Systems, a security company. 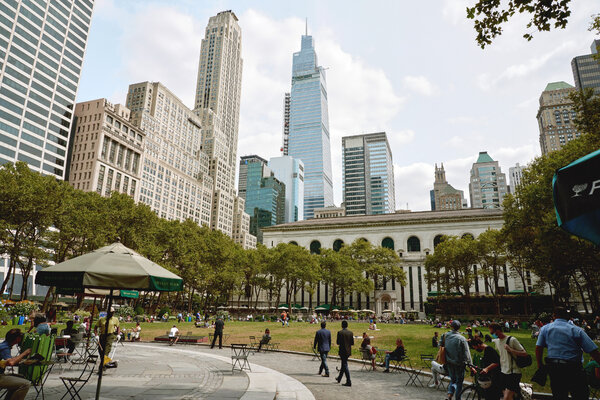 At the start of June, the rents on Manhattan office space were down 16 percent from the end of 2019, CBRE estimated. The drop could exceed 20 percent after inducements like free rent and allowances for renovations, known in the business as “tenant improvement,” or T.I., are included, said Nicole LaRusso, senior director of research and analysis at CBRE. Still, some indicators, like a recent reduction in the amount of space tenants are releasing into the sublet market each month, are making Ms. LaRusso feel more optimistic.

“I think we are seeing the beginning of the end,” she said.

It’s not that people won’t return to the office, ever. After all, some buildings, such as One Vanderbilt, a colossal new skyscraper adjacent to Grand Central Terminal, are still attracting tenants — even if they are paying lower rents. In an interview, SL Green’s Mr. Durels said his firm, which is One Vanderbilt’s developer, had signed 14 deals for the building since the pandemic began. And TD Bank Group, a Canadian financial firm that is the anchor tenant at One Vanderbilt with 10 floors, recently increased the space it is leasing by 24,000 square feet.

The challenge for landlords is that the city isn’t using all the space it has, and companies are unsure of their return-to-office plans. That’s especially worrying because New York City had a flurry of construction in the past decade, including enormous developments like Hudson Yards on Manhattan’s Far West Side. So even short-term imbalances of supply and demand could weigh heavily on real estate firms and investors. That, in turn, could hurt New York’s financial recovery, since commercial landlords pay roughly 10 percent of the city’s taxes.

Some large employers, including banks like Goldman Sachs and JPMorgan Chase, which own their buildings, have mandated returns to the office this summer. But many other companies are returning more slowly and in smaller numbers than landlords expected. The private equity firm Carlyle, which has leased several floors in One Vanderbilt, has said workers need not return until mid-September — and even then they’ll be required to be there only three days a week. Twitter, which employs about 700 workers in its Chelsea office, has told workers that they can stay home indefinitely.

“There is only so long you can delay the decisions before the lease is up,” said Anthony Paolone, an analyst at JPMorgan who follows real estate companies. “It shouldn’t be a big surprise that activity picks up; it kind of has to. But where are those lease economics going to be?”

As workers gradually return to the office, large corporate landlords are predicting an emphasis not only on health and safety, but on a desire to engage much more with colleagues in kitchens, gyms and restaurants. Many are also anticipating a new level of flexibility toward remote work, and trying to accommodate those requests.

Landlords say top-notch air-ventilation systems and large-capacity elevators that allow for social distancing — features of most large bank office towers — are now widely expected. But they’re also increasingly focused on providing office facilities that are roomy enough to safely allow large gatherings, and conference rooms equipped with videoconferencing. Some are providing movement-sensitive cameras that locate speakers by the sound of their voices to improve the imaging during video calls. Others are building out public spaces on their ground floors to encourage tenants to mingle with colleagues and clients.

Blackstone, whose anchor tenant announced plans to leave 1740 Broadway a few months before the pandemic first swept through New York, has refashioned the space to include a private tenants’ club and a restaurant. Some early marketing materials, which featured sketches of people in yoga poses and photographs of others eating and working in an expansive club space reminiscent of an airport lounge, carried this tag line: “Culture is the ultimate amenity.”

“People are starting to realize that real estate is a competitive advantage for talent,” said Andrew Min, a vice president in the strategic planning division of RXR Realty. “Your environment in which you sit is a really big indicator and driver of your experience as an employee,” he added, “and we need to continue to make sure that the space continues to work for employers.”

“In a pandemic world it seems a little counterintuitive, but the reality of it is, we felt there were efficiencies in having the ability to having those teams and those leaders together under one roof,” he said.

Other offices are rethinking their traditional designs, allowing for more than one person to use the same desk during a single week or for workers to have easy access to soundproof rooms for videoconferencing.

“It used to be like, ‘Wait, why is that guy onscreen? If he wanted a meeting, why didn’t he come to SoHo?’” said Leslie D. Biddle, a partner at the financial firm Serengeti Asset Management, whose offices are on Broadway in downtown Manhattan. “And that mentality has really changed.”

Ms. Biddle renegotiated her lease in the middle of the pandemic and the protests last year that preceded looting in SoHo. Serengeti moved to another floor in the same building, cut its overall space by half and received a deep rent cut, she said. Several rooms were also equipped with video screens to accommodate video calls.

Now, as the firm’s 22 workers prepare to return to work more regularly, Ms. Biddle is contemplating a three-day in-person week organized by team. Those who choose to work from the office full time will most likely have dedicated desks, she said, whereas those working fewer days may have to share.

RXR Realty, which is now pitching “prebuilt” office space at its 75 Rockefeller Plaza building, where Bank of America is a tenant, expects to be asked for accommodations like Serengeti’s. Its 21st-floor showroom features modular furniture that can be easily moved and walls that can be relocated over a weekend by a single technician, rather than a fleet of glass experts, painters and carpenters.

For a cost of $9,000 a year, RXR has also installed motion sensors that help track the number of people using each space at a time and how often the spaces are used. Such data, RXR believes, will help inform changes to the way each office suite is laid out, transforming underused conference rooms into individual offices, for instance, or removing the desks from unpopular seating areas and turning the areas into lounges instead.

“Everything we have is modular,” said Scott Rechler, the chief executive of RXR, “so as everything begins to shift, you can actually move the walls over a weekend.”