Home » Business » Los Angeles On-Location Filming Rebounds In Third Quarter, But FilmLA Chief Sees No Return To Normal Until Spring “At The Earliest”

Los Angeles On-Location Filming Rebounds In Third Quarter, But FilmLA Chief Sees No Return To Normal Until Spring “At The Earliest”

On-location filming in Los Angeles began a slow rebound in the third quarter of 2020, but despite the improved production outlook, FilmLA president Paul Audley said that there is “no way it will be back at normal numbers this year, or until next spring at the earliest.”

Data compiled by FilmLA, the city and county’s film permit office, shows that on-location feature film shoot days were down more than 64% from the third quarter last year, TV dramas were down over 73%, TV pilots fell more than 90% from a year ago, and TV comedies plunged by 96%. But buoyed by a robust return of reality TV shows and a solid comeback by commercials, on-location shooting days were only down 54.5% from the third quarter of 2019. 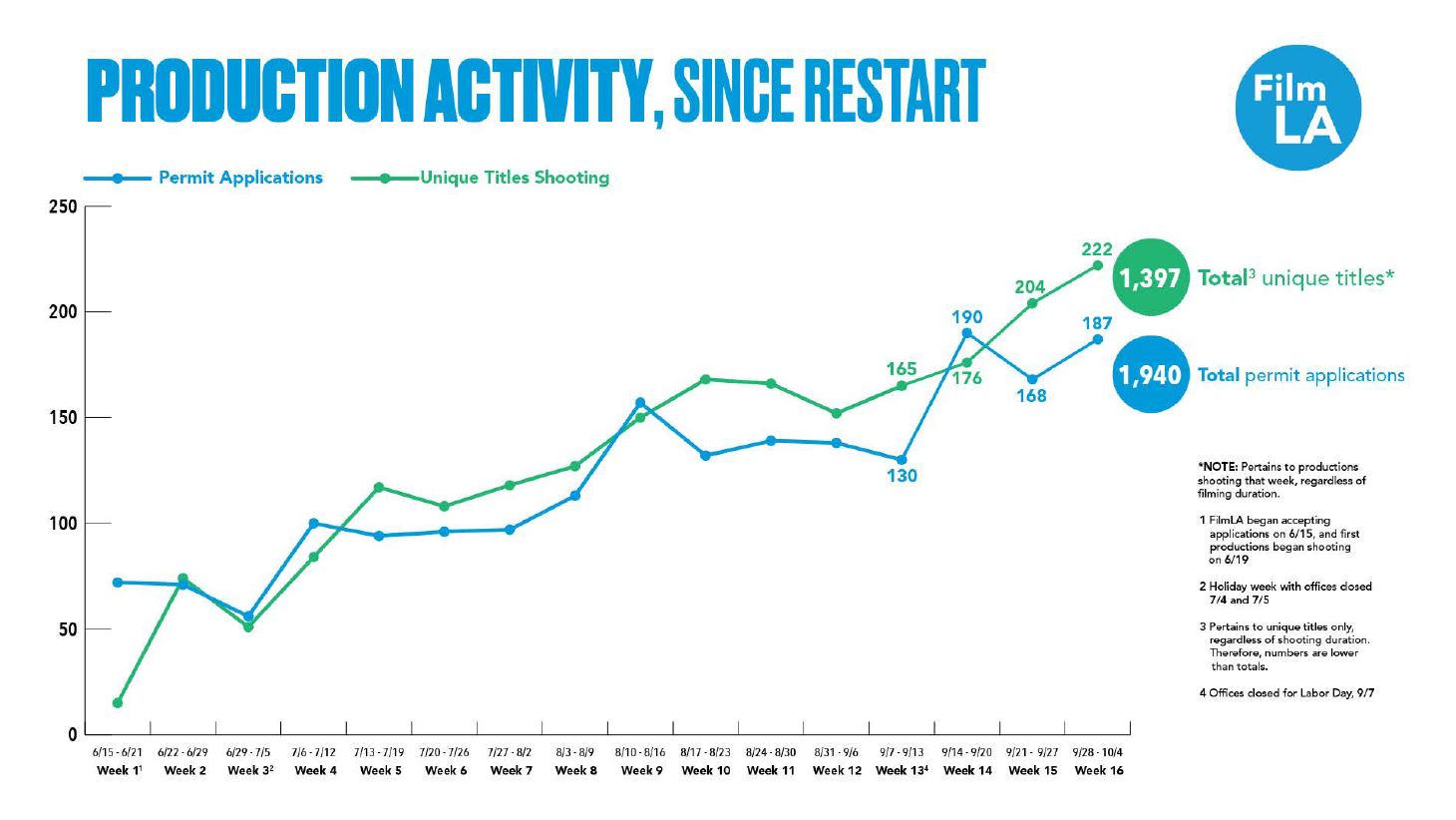 The third quarter numbers represent a huge improvement over the second quarter of 2020, when film and TV production all but ground to a halt during the early days of the COVID-19 pandemic. According to FilmLA, there were only three days of on-location feature film shoots in the city from April through June, compared to 352 days this July-September. Only two of those days (0.6%), however, were on a film that received tax incentives from the state of California. That film is MGM’s Dog, in which Channing Tatum is starring and making his directorial debut. 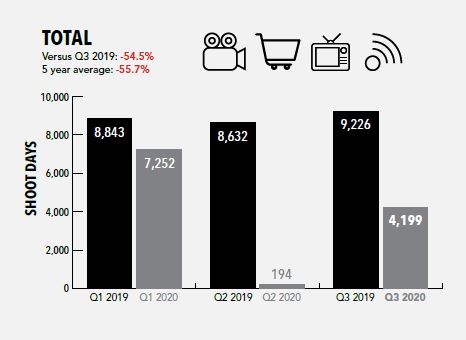 TV dramas, which had fallen to only nine shooting days in the second quarter, rose to 286 days in the third quarter, but that’s still down 73% from last year. Nearly 25% of the TV drama shooting days in this third quarter were on shows that received tax incentives from the state, including The Rookie, This Is Us, Good Trouble, Animal Kingdom, S.W.A.T., Snowfall, Lucifer and Mayans M.C. – all of which have been shooting in town. 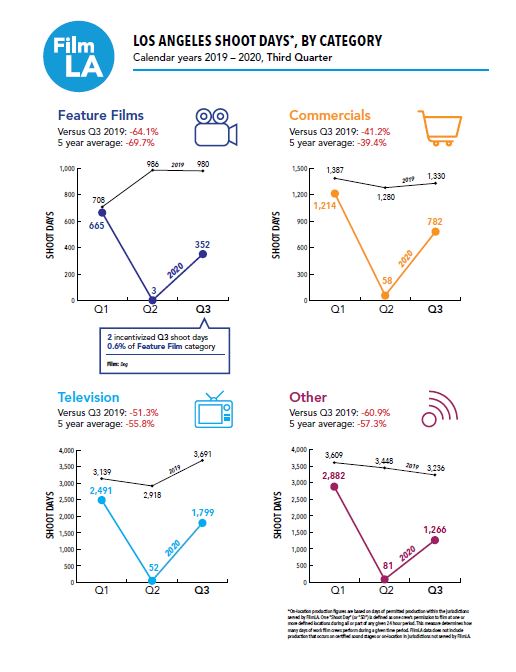 With smaller casts and crews, reality shows, commercials and web-based TV, which are all showing signs of a comeback, don’t generate as many jobs as larger-scale feature film and scripted television projects, however. “The numbers would be devastating if we didn’t have reality shows and commercials,” FilmLA’s Audley told Deadline. “And although they’re showing good increases, they’re not a reflection of a real recovery in film and television employment. They have been the sustaining factor, but we’re hoping to see a big boost in the employment numbers in the fourth quarter with the return of larger crews for scripted TV shows and features.”

And now that the unions and companies have agreed to safe return-to-work protocols, Audley said that feature films and scripted television are poised to make a strong return to the streets of L.A. “The stage is set for a return – not to business-as-usual, but to the best-progress possible for film production in area communities,” he said. “L.A. loves film, and there is a real enthusiasm to see this work come back, plus a real effort on the part of the industry and local public health authorities to see that it does so with care for public health.”

FilmLA said in a statement, “These larger-scale projects, poised to resume now that unprecedented labor agreements were reached in late September, are powerful job creators and essential to the survival of thousands of local businesses that depend on production.” These high-value projects are also the types of productions that are eligible for the California Film & Television Tax Credit Program. The state tax credit’s Program 3.0 incentivizes in-state production of TV projects and feature films, with several application periods each fiscal year.

FilmLA said that in September, it saw multiple weeks of business activity increases, receiving on average around 34 film permit applications per day. September was also the month that television edged out commercials as the source of new applications for the first time since June.

“That reality TV emerged as the bright spot for LA’s summer filming season is unsurprising,” FilmLA said. “Operating with smaller crews and casts and the freedom to easily adjust storyline and location choice, reality projects came online quickly after L.A. County reopened to filming in mid-June with robust health protection protocols in place. Although reality TV production peaked in Greater Los Angeles in 2014, and the category has declined each year since then, FilmLA joins other industry observers in predicting a comeback for the reality TV format, as content distributors, including streaming services, pipeline new content for their platforms.

“The advertising industry, represented in FilmLA data by commercials and still photography, also saw a quick return to production over the summer,” the permit office said. “Straightforward public health protocols, small crew sizes and location flexibility were key. Immediately following the resumption of filming, these genres played an important role in testing the compatibility of the County’s COVID-19 protocols with FilmLA’s streamlined approach to permitting. Permit turnaround time has returned to prior efficiency, at around three business days for non-complex shoots.”

Audley also emphasized the role of testing, sanitizing, physical distancing and PPE use for keeping film sets safe. “Even while exercising all due caution, we may see a few productions shut down for the sake of worker safety,” he said. “None of this is incompatible with the county’s road to recovery. This is a system set up by conscientious people, working as designed for the protection of Greater L.A.” 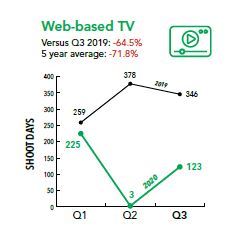 FilmLA’s on-location production figures are based on days of permitted production within the jurisdictions served by FilmLA. One “Shoot Day” is defined as one crew’s permission to film at one or more defined locations during all or part of any given 24 hour period. This measure determines how many days of work film crews perform during a given time period. FilmLA data does not include production that occurs on certified sound stages or on-location in jurisdictions not served by FilmLA.