The Centre may not be keen to bring the change because it earns much more from taxes on petrol and diesel. 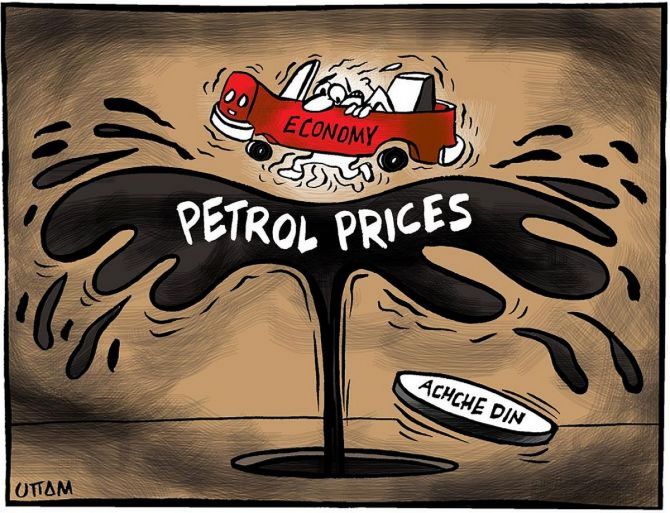 Many states are open to the idea of petrol and diesel being brought under the goods and services tax (GST) regime – contrary to the perception that they are averse to it – but they want a concrete proposal, including a compensation mechanism, from the Centre.

West Bengal Finance Minister Amit Mitra says while the issue can be discussed, the Centre may not be keen to bring the change because it earns “much more” from taxes on petrol and diesel.

“So, definitely, the Union government does not want GST on fuel. It is all lies. Currently, they are in a very cozy place,” Mitra told Business Standard.

Under GST, revenues are equally shared between the Centre and states by way of central GST and state GST, he said.

Mitra said cesses accounted for up to 70 per cent of the central taxes on petrol and diesel at present, and these were not shared with states by way of devolution.

The Centre, he said, was earning nearly double of what states got in the case of petrol, and nearly three times for diesel.

Kerala Finance Minister Thomas Isaac said the issue could be discussed in the Council meeting, with focus on a compensation mechanism.

“The formula is single. Compensate us for the tax shortfall arising on account of subsuming fuel under GST. We are ready.

“Let this be discussed in the Council meeting. But compensation has to be worked out in conjunction with states,” he said.

Chhattisgarh Health Minister T S Singh Deo, who represents the state in GST Council meetings, said states would not be at a disadvantage if fuel was subsumed under GST because besides an equal revenue share, they would get an additional 41 per cent from the devolution of CGST share.

“However, the amount of revenue that states are getting should not come down. Percentages are inconsequential.

“If Chhattisgarh is getting Rs 3,000 crore now from taxes on fuel, the revenue under GST should not be lower than this and must grow over the years as consumption goes up.

“Hence, a compensation formula will need to be worked out,” said Deo.

He said states would not have an issue if they got protected revenues, but they had a bad experience as the Union government had gone back on its word earlier.

“So the entire decision of the GST regime is under question today because the presumption that the economy would go on improving hasn’t happened — neither before Covid, nor after Covid.

“We will need continued protected revenues because the whole purpose will get defeated if revenues are not protected,” said Deo.

Talks on GST compensation for the current financial year went for long and the issue was resolved after the Centre agreed to borrow on behalf of the states.

As many as 17 Union and state taxes were subsumed under GST with effect from April 1, 2017.

However, alcohol, electricity, and some parts of the real estate sector were kept out of it.

Petroleum products were included in GST, but tax was not imposed on five of them — crude oil, natural gas, aviation fuel, diesel and petrol.

This means as and when the GST Council decides to bring these petroleum products under GST, that can be done without amending the Constitution.

Amid an outcry over the record high petrol and diesel prices, Finance Minister Nirmala Sitharaman recently said the Centre and state governments would have to together work out a mechanism to bring retail rates to reasonable levels.