Is compensation received from employer taxable?

There are judicial precedents where it has been held that if payment is made for temporary disablement, it would be taxable, points out Tinesh Bhasin.

Jitendra Solanki was paid Rs 32 lakh by his company after he lost an eye on the ship.

The money was paid through an insurance company, as Solanki had suffered partial disability and his career in the merchant navy was virtually over.

However, when he bought a house with that money, he received an income-tax notice seeking explanation of the source of income.

In addition, the tax officer disputed that the compensation would be subject to tax.

Companies have policies for providing compensation to the employees or their legal heirs in case an employee dies or gets injured while in service.

But there is a catch.

Ideally, if the compensation is made through an insurance company for partial or full disability, it should not be taxable as it is under the contract of insurance.

“But payment through an insurer, however, may not be free from litigation. The employee would still need to defend it. There are judicial precedents where it has been held that if payment is made for temporary disablement, it would be taxable. But where compensation is for permanent disablement, the same is a capital receipt and not taxable,” says Kuldip Kumar, partner & leader, personal tax at PwC India.

In the case of Solanki, the decision by the tax officer could have varied, depending on whether the insurance policy was approved by the Insurance Regulatory and Development Authority of India or was it an international policy.

In the case of a global insurance policy, the tax officer may not consider it as a valid insurance contract in India.

Those in the merchant navy sail most of the year, and before examining the tax on compensation, one needs to see their residential status under the I-T Act. 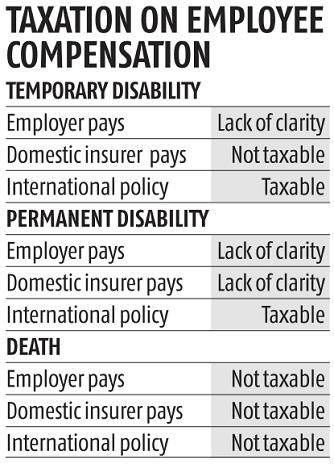 Things are no different when the employer bears the burden.

Tax experts are divided on how the compensation would be taxed.

It may vary, depending on whether there’s temporary disability, partial or permanent disability.

“If the compensation has been received on account of the injury, the exemption may be claimed on the reasoning that it is a capital receipt, thus, not chargeable to tax,” says Naveen Wadhwa, a chartered accountant with Taxmann.com.

According to him, as no services have been rendered by the employee in lieu of such compensation, and the compensation is not in the nature of income, and there should not be any tax on it.

Preeti Khurana, a chartered accountant with ClearTax.in, agrees with the reasoning.

“Small businesses who do not register themselves under the Employees State Insurance Act, 1948, are bound to compensate for personal injury caused by accident during the course of employment under The Employees Compensation Act, 1923,” says Khurana.

In such cases, therefore, the employer pays compensation from the company’s account.

The compensation would not constitute income from rendering of any services even if the employer-employee relation remains in force.

“The judgment in case of Vinod Kumar Gupta vs I-T Officer, permanent disablement should be exempted from tax,” says Surana.

But, that is not the final word.