The Apple iPhone comprises 44 per cent of the global smartphone market’s revenues and it is the second most-such device to be shipped after Samsung. 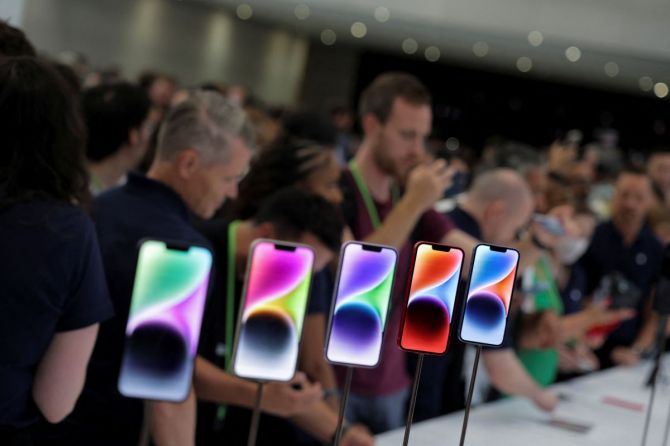 More than half of smartphones used in the US are iPhones.

More than 7 million iPhones are expected to be sold in India in 2022, extending the user base to 20 million, according to market research and analyst firm Techarc.

Hence, the news about Apple scaling down its production target for iPhone 14 in India has made news.

However, according to industry experts reducing iPhone 14 production target due to lower demand will have “marginal or no impact” on Apple’s India plans.

India is the world’s second-largest smartphone market after China.

Apple set a target of producing additional 6 million units for the second half of this year, but revised it to last year’s 90 million units.

The company is assembling iPhone 14 for the first time in India at its global partner Foxconn’s facility in Sriperumbudur near Chennai.

“I do expect that there is going to be an impact on this facility at least in the near term as the unit was supposed to make iPhone 14 and iPhone 14 plus,” said Barnik Maitra, managing partner at international consultancy Arthur D Little, India.

“Apple has asked all these suppliers to try to migrate to models with higher demand like iPhone 14 Pro Max production.

“I do not know if the facility in India has the ability to do this migration quickly,” Maitra said.

Apple did not respond to questions from Business Standard.

A senior industry source said it is too early to comment on Apple’s India manufacturing of iPhone 14.

Apple’s revised target was made days after a JP Morgan report said that the smartphone giant may move a quarter of its iPhone production to India by 2025.

The brokerage indicated that 5 per cent of the iPhone 14 production may also be shifted to India by the end of 2022.

“From a 2025 point of view, I don’t think we are going to miss that. Because of the iPhone 14 decision, there may be a temporary setback for a quarter or two,” Maitra added.

A major reason for the lower demand for iPhone 14 is considered to be the slowdown in the US economy.

“It is simply an inventory management and operations call.

“Earlier also we have seen models that had no initial demand and picked up sales later.

“There is a recession in the developed world and hence the demand may be slow,” said Jayanth Kolla, co-founder of market research firm Convergence Catalyst.

“Apple should relook at its strategy focusing more on emerging markets in Asia,” Kolla said.

Experts said Apple’s decision to make iPhone 14 in India would prompt high-end component makers to set shop in the country.

This may also bring down the cost of high-end phones in India, which in some cases has at least 60-70 per cent price difference compared to the US market.

Techarc’s report said that around 162 million smartphones are expected to be sold in India in 2022, meaning a decline in demand is unlikely. “If you look at the 25 per cent goal by Apple, around 90 per cent of India’s capacity will be for exports, not for domestic consumption. As long as Apple’s global story is intact, there will be minimal impact on India,” Maitra said.

According to data shared by Counterpoint Research, Apple’s iPhone revenue increased 35 per cent year-on-year to $196 billion in 2021.

Demand for 5G-enabled iPhone 12 and 13 series helped Apple register 14 per cent growth in its overall average selling price, which reached $825 in 2021. The report said the company increased its share in key emerging markets such as India, Thailand, Vietnam and Brazil.

“As long as Apple’s growth story is intact, the probability of India playing a huge role in iPhone manufacturing will be higher,” said Maitra.