I launched my full-time voice-over career just last year, but even as a kid, I was always doing voice work in some way. I would constantly mimic the people I heard in commercials and on the radio and I made tons of prank phone calls, but I never really thought about it as something I could do as a career.

I went to Rutgers University to study journalism and visual arts. After working at MSNBC and a local news station for several years, I moved to Texas in 2016. There, I eventually switched over to a production company where I wrote and produced TV and radio ads.

One day, I was going over a client’s script with my colleagues. Just as a joke, I read the script out loud in the most over-the-top radio voice I could think of. They stopped and stared at me; then they said, “Wow, that was really good!”

I started doing voice-overs for the company and realized it was really fun.

I also think it also helped that I’m a very animated person and I enunciate well.

Then around January 2020, right before the pandemic, I was going through a divorce and felt unhappy going to work for nine hours a day. I told myself, “I’m going to quit my job, start freelancing, buy a school bus, and I’m going to travel.”

I made my own voice-over demo reel and made a profile on Fiverr and things surprisingly took off.

One of the first clients I got was Fiverr itself. I know they will hire new members to give them some credibility, so I think they just saw that I was new and they liked my demo. Now I book probably 90% of my work through Fiverr, where other companies will find me for their clients. I’ve done VOs for companies like, Valvoline, Community Coffee, Verizon, Accenture, and Amazon.

I always ask potential clients a few questions before accepting the job. 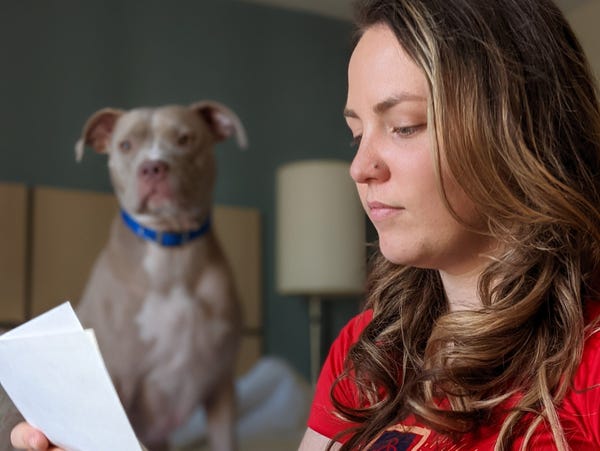 I ask how long the script is, what’s the audience and tone they’re going for, and whether or not the recording has to meet certain time requirements. My voice-overs typically run anywhere from 15 seconds to three minutes, but I’ve done some audio (usually for e-learning projects) that was as long as 20 minutes.

Generally, I practice a script a couple times and record it as many as four times, depending on how comfortable I am with the style and subject. Medical or technical copy can take me way longer. Then comes editing, which takes forever. I usually spend four times as long on editing as I do on recording, because I have to remove breaths, gaps, mess-ups, etc. I spend about 10% of my time practicing scripts, 30% recording them, and 60% editing the recording.

I’ve spent over $1,000 on equipment to produce the best quality voice-overs.

I work with a Rode NT USB mic, which costs about $170, and then I have a dinky HP laptop that I bought about a year ago. I definitely should have bought a more powerful one, but for now it gets the job done.

I also bought myself an Isovox, which is a soundproofed, square-shaped box you shove your head into. It’s super claustrophobic, but it makes my audio sound pretty great. I use a program called Audacity to edit my work.

Because of COVID-19, there are tons of phone-recording jobs. 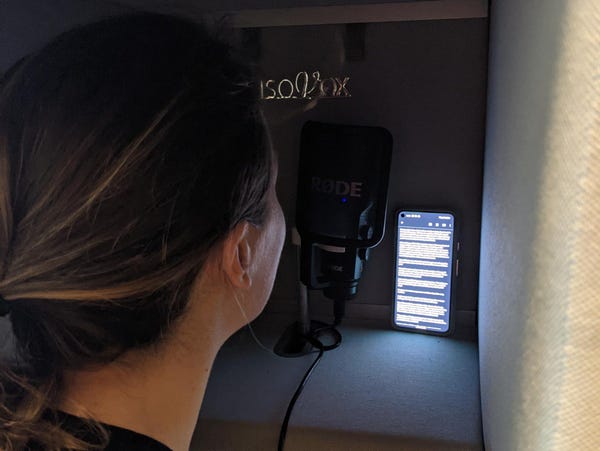 About 20% of my orders nowadays talk about safety precautions or mention COVID directly. Pretty much every company needs a new outgoing message saying, “Thank you for calling blah-blah. Here are the precautions we’re taking” or “We offer pick-ups and deliveries, etc.”

These are probably the most boring jobs, because they’re just so straightforward. Personally, my favorite assignments are when I get to feel like I’m acting and I can really get into a character.

Taking care of my voice is something I try not to be a diva about. Mainly, I just stay hydrated. I try not to record in the morning, when I sound congested and nasally. I also avoid recording when I’m tired or angry, because that’ll come through in my vocal quality.

I sometimes get weird and even creepy requests.

As a freelancer, I’ve already surpassed my old full-time income. In January, I had my best week ever when I made about $3,300. February was my best month to date — I made just under $10,000 total. And even on my busiest days, I’m still only working from about noon to 5 p.m. The amount of free time this career allows has been the biggest blessing, as it’s given me and my partner time to work on refurbishing our school bus. 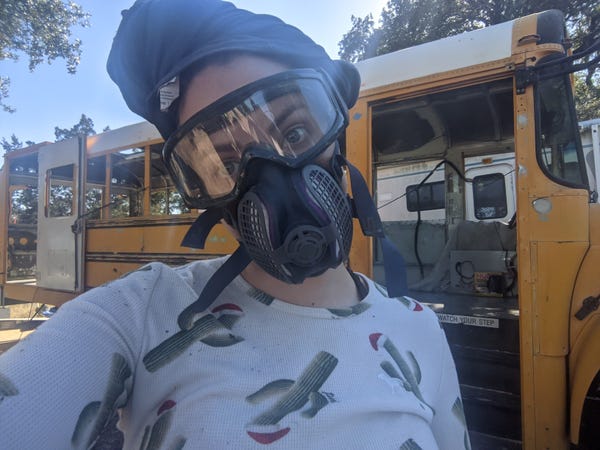 If you want to get into this line of work, work on your acting.

Even if you have a nice voice, doing voice-overs is really about being an actor more than anything. You have to be able to sound compelling and convincing.

There are websites specifically for finding voice-over work, like Voices.com, Voices123, and VoiceBunny. I went the Fiverr route because I’d used it in my previous lines of work. You can definitely land bigger jobs on the voice-over websites, whereas a lot of the Fiverr and Upwork roles are more for mom-and-pop places. I’ve had my share of big clients, but most of my work is for smaller companies.

You’re going to get a lot of rejections at the start, especially if you go the more traditional route of auditioning for roles. While I don’t audition for the work I get via Fiverr, I’m also on Upwork, where I audition for roles and lose a lot of them. You can do something you think is perfect and other people hate it. It’s hard sometimes, but I’ve learned to just power through and continually improve.