How a Buzzy Cryptocurrency Fizzled 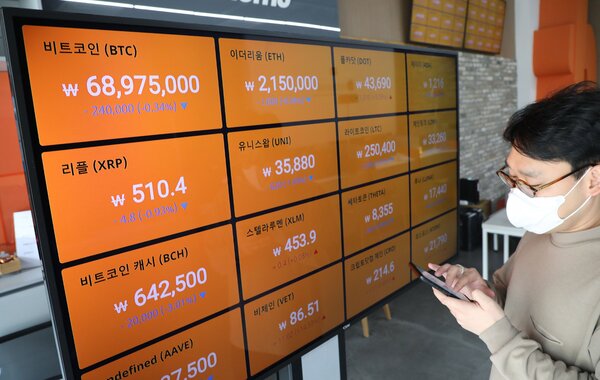 The “Internet Computer” is an ambitious crypto project by the Dfinity Foundation, a Swiss nonprofit organization with big Silicon Valley backers like Andreessen Horowitz. Last month, it was the darling of the crypto world when it held a bonanza of an initial coin offering, valuing its token, known as ICP, at tens of billions of dollars in market cap. It’s a different story now, after ICP has lost more than 90 percent of its value.

Even in the famously volatile crypto market, ICP stands out. The stunning climb and crash has people asking what really happened — and who may have profited.

“Something went wrong,” said Miguel Morel of Arkham Intelligence, a crypto analysis firm that tracked ICP tokens through the blockchain. In a report shared with DealBook, Arkham noted that “a token dropping over 90 percent in the first month after launch is highly unusual.” Arkham said that it found 44 “probable insider addresses” that deposited 10 million ICP tokens worth over $2 billion at the time to exchanges, which coincided with significant drops in the price of ICP. Small investors were stuck with a complicated process and limited customer support, the report claimed.

“Dfinity did not follow the playbook of other successful projects,” Arkham’s report said. “Instead it appears they quietly allowed the treasury and insiders to send billions of dollars of ICP to exchanges, while making it extremely difficult for their longtime supporters to access the tokens they were promised.”

Dfinity blamed bad actors on social media for undermining its project. “Day traders with alternative agendas and unethical crypto projects have used Reddit and Twitter to confuse the public,” it said in a statement. It denied that the token claim process was overly technical, and said the investors who had difficulties got the support they needed. A Dfinity spokesman, Michael Lee, said that the company was taking the “high road” and focusing on developing its Internet Computer project rather than rumors by potential saboteurs.

Dfinity’s project, years in the works, uses the ICP token to help operate a decentralized layer of web infrastructure that believers say will liberate users from reliance on tech giants like Amazon and Google. (It’s complicated.)

Some crypto industry players say that the price crash was just bad luck for a hyped project that happened to be listed just as extreme enthusiasm was waning. But Morel pointed out that ICP’s fall was the most substantial of the top 100 cryptocurrencies, worse even than Shiba Inu Coin, a joke token based on the meme cryptocurrency Dogecoin. In other words, a postmodern comedy project with no technological proposition backing it experienced less distress than the token underlying Dfinity’s grand goals.

For more on the rise and fall of ICP, read the full article by DealBook’s Ephrat Livni and Andrew Ross Sorkin.

A bipartisan compromise on infrastructure spending stays alive. Moderate Republicans said they felt reassured after President Biden walked back his comments days ago about not approving the $1.2 trillion proposal without Congress also passing a far bigger spending bill along party lines.

Britain’s new health minister will press for reopening. Sajid Javid, who took over the role after Matt Hancock resigned this weekend amid a controversy about violating social-distancing rules, is expected to press for the lifting of final pandemic restrictions in July. The full reopening had been delayed because of a surge in coronavirus infections, tied to the Delta variant.

Johnson & Johnson settles with New York State over its role in the opioid crisis. The company will pay $230 million and stop promoting or distributing the drugs anywhere in the U.S. The settlement came shortly before opening arguments begin tomorrow in a trial in which J.&J. was a major defendant.

Britain’s financial regulator bans a big cryptocurrency exchange. The Financial Conduct Authority ordered Binance to stop all regulated activities in the country. The move comes as the agency is moving to crack down on illicit activities potentially tied to crypto.

A strong opening for the latest “Fast and Furious” movie suggests that theaters are recovering. “F9: The Fast Saga” was expected to earn $68 million in the U.S. for its opening weekend, and over $300 million internationally. Hollywood hopes that it’s a sign audiences are returning in force to theaters as pandemic lockdowns lift.

Combing for clues to the Miami tower’s collapse

As rescuers continue to search for survivors of the 13-story Miami condo that collapsed on Friday — nine are confirmed dead, with more than 150 unaccounted for — investigators are homing in on potential causes.

Signs of a “progressive collapse” emerge. Video footage of the disaster suggests that a weak spot at the bottom of the condo may have been the initial fault. From there, other failures — from design flaws to poor construction allowed in the building codes when the tower was built — may have compounded, leading to one of the deadliest accidental building collapses in American history. Three years ago, a consultant found alarming evidence of “major structural damage” to the concrete slab below the pool deck and “abundant” cracking and crumbling of the columns, beams and walls of the parking garage under the building.

“It’s not at all a common occurrence to have a building fall down in America,” Charles Burkett, the mayor of Surfside, Fla., where the collapse occurred, told The Times. “There was something very, very wrong with this situation.”

Concerns about other catastrophes. Experts are worried not only about the safety of buildings in the surrounding area, but also for other decades-old towers across South Florida that may suffer from core weaknesses and damage accumulated over the years, including corrosion and battering from hurricanes.

“The fact is there are a limited number of jobs and we sort them based on power. Race is a deciding factor.”

— Darrick Hamilton, a professor of economics at the New School in New York, on the widening wage gap between Black and white workers. Economists are grappling with how much to blame bias or a changing economy for the disparity. Meanwhile, President Biden’s pledge to make addressing racial inequity one of his major policy initiatives is running into legal and political obstacles.

The breakout stars of the Paycheck Protection Program

As the Paycheck Protection Program struggled to reach the tiniest and neediest businesses during the pandemic, two fintech start-ups stepped into help — and reaped a windfall in return, The Times’s Stacy Cowley and Ella Koeze report.

Meet Blueacorn and Womply, both of which moved into helping arrange P.P.P. loans after Congress tweaked the rescue program to bolster profits for those lending to the neediest companies. Blueacorn was founded last April to help small businesses secure P.P.P. loans by simplifying the necessary paperwork. Womply was created a decade ago to sell marketing software for restaurants, retailers and other small businesses — only to switch gears after discovering its clients were having a hard time securing loans from banks.

How it worked. Blueacorn and Womply aren’t actually banks. Rather, they acted as middlemen, handling tasks big banks wouldn’t do and small banks couldn’t: They ran marketing campaigns encouraging freelancers, gig workers and other small businesses to apply for loans through their websites, and then directed those applications to lenders.

It became a multibillion-dollar business. Blueacorn and Womply collected more than $3 billion in fees, extracted from fees that lenders made on each loan, according to a Times analysis. (That far surpassed what any of the program’s 5,200 participating lenders made.)

From late February to the program’s end on May 31, the companies processed 2.3 million loans. Most were for less than $17,000, and the vast majority went to solo ventures, which were more likely to be run by women and people of color.

Panasonic sold its 1.4 million shares in Tesla, which made it a top 15 shareholder, for $3.6 billion. (Reuters)

In bank mandate news, GlaxoSmithKline has reportedly hired Goldman Sachs and Citigroup to lead the spinoff of its consumer brands, while the shoe brand Allbirds has chosen Morgan Stanley to run its I.P.O. (Bloomberg)

Missouri scrapped extra unemployment benefits, saying it kept people out of the labor market. But workers still seem to be choosy. (NYT)

J.D. Vance, the former venture capitalist and author of “Hillbilly Elegy,” is expected to announce his run for the Senate in Ohio as a Republican this week. (Axios)

Apple and Microsoft are squaring off again, this time over how much control to exert over their app stores. (WSJ)

UBS will let two-thirds of its employees mix working from home and from the office, a stark contrast to its Wall Street rivals. (FT)

Along those lines, here are some tips for navigating the new politics of hybrid offices. (WSJ)

How the pandemic transformed cryonics, also known as the business of freezing people in hopes of reviving them far in the future. (NYT)